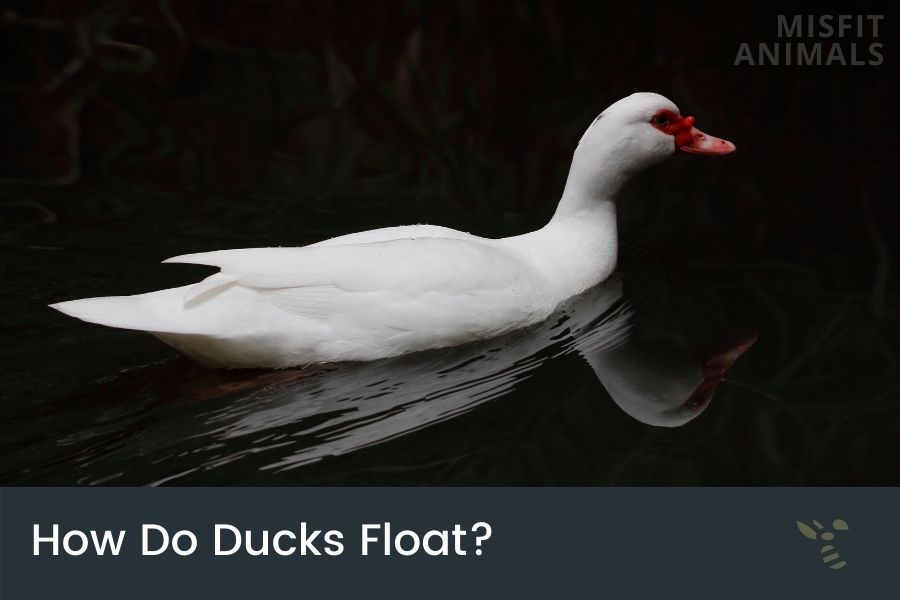 Ducks float due to their hollow bones, their waterproof feathers, and the way they trap air between their wings and body while laying in the water.

You’ve probably seen a duck floating on water and wondered how they do it.

It seems like such an easy task, but what is going on underneath the surface that allows them to stay afloat?

Turns out, there is some pretty interesting science behind it.

In this article, we will explore the scientific explanation for how ducks float.

When ducks swim around in a pond or a lake, they don’t use any energy to float. They float due to thousands of years of evolution, which ultimately lead them to be buoyant.

As they lay in the water, they use their webbed feet as paddles to propel around. The duck acts as a sort of boat, keeping its balance with its bodyweight.

How Do Ducks Float?

Ducks float due to them being buoyant, meaning the mass of their bodies is lighter than that of water. This is due to their hollow bones, feathers, and air-trapping technique.

The reason why ducks’ bodies are so low in density is that they have a high percentage of body fat and oils. They also have hollow bones.

Let’s take a look at the other reasons why ducks float.

Duck feathers are waterproof. They naturally repel water, making it easier for ducks to float[2].

All waterfowl have waterproof feathers, and here’s how it works.

Grown ducks secrete a special oil, called preen oil, from oil glands in their rumps. This oil is secreted into the water, which then comes into contact with their feathers.

The process happens this way because a mother duck then also can protect her ducklings. As a mother duck secretes oil, the duckling will swim into it, waterproofing their hairs, as they can’t secrete preen oil themselves.

Related: Why do ducks have feathers?

Trapping Air Between Their Feathers and Body

Ducks decrease their density by trapping air between their feathers and body.

The unique structure of the duck’s feathers creates an insulation layer that traps warm air close to their skin. Not only does it help them float, but this layer of trapped air also keeps a duck’s skin dry and reduces how much heat is lost through the feathers.

The interlocking structure of the duck’s feathers also helps them be more buoyant in water, making it easier for them to float. This allows ducks to control their own density by selectively pumping air into or out of their chest cavities.

Their Bones Are Hollow

Ducks have hollow bones. Since their bones are filled up, they weigh less, further reducing the density.

Hollow bones help reduce weight, which is an advantage when floating.

Even though ducks have hollow bones, they’re quite strong. This hollow bone structure not only helps them stay afloat but also helps them fly easier, as they have to carry less weight.

Interlocking feathers make it easier for ducks to float on water.

Interlocking feathers is the secret to how ducks manage to trap air between their wings and body.

The feathers, which are called pennaceous or contour feathers, have a very important job in allowing the duck to float on the surface of the water. These feathers lie over one another and overlap, preventing air from escaping.

Ducks also have a rather large body, which helps them distribute weight across a larger surface area.

Ducks are naturally buoyant. Buoyant is defined as:

“able or tending to keep afloat or rise to the top of a liquid or gas.”

This means they are basically floating on top of the water. Why are they buoyant?

Because of all the reasons listed above.

Do Ducks Get Wet in Water?

No, ducks don’t get wet in water. This is due to the preen oil that covers their feathers, making them repel water.

Most things get wet when they come in contact with water. But not ducks.

Ducks manage to stay dry when floating or even diving. This is because of the hydrophobic substance on their feathers called preen oil.

As we all know, water and oil do not mix, they separate. If you pour a small amount of cooking oil into a puddle of water, it will float to the top. This is the same concept ducks have managed to take advantage of.

Ducks have been observed being submerged underwater for long periods of time and not getting wet at all.[3]

No, ducks can’t sink. This is because of their light density compared to the density of water. Ducks are buoyant, and buoyant things don’t sink.

As previously stated, ducks are buoyant, due to their hollow bones and interlocking feathers, which they use to trap water.

However, ducks can dive underwater, either to forage for plants and insects living underwater or to avoid predators.

Are Ducks Swimming or Floating?

Ducks are both swimming and floating. Floating is a passive action for ducks – it simply happens. Swimming is an active action, where they use their feet to propel them forward.

Ducks are waterfowl that are known for feeding, swimming, and living in the water.

When ducks are simply laying in the water, they’re floating. This is when they’re doing nothing, but simply resting. They can also swim, which is an active action.

When swimming, unlike other animals, ducks don’t use all four limbs; they only use their two legs to paddle forward.

Ducks are great swimmers, primarily due to the fact that they don’t have to use energy while floating, as well as their webbed feet.

Some ducks can stay underwater for a minute, while others can only hold their breath for 10-15 seconds.

How Long Can Ducks Float?

Ducks can float forever. They don’t spend any energy floating unless the water is cold enough to the point where they have to use energy to keep themselves warm.

In other words, they can float as long as they’re alive.

How Long Can a Duck Stay Under Water?

Some ducks can stay underwater for a minute, while others can only hold their breath for 10-15 seconds.

Most ducks are comfortable spending 10 to 30 seconds underwater, but some breeds can stay submerged for longer than a minute. Diving ducks have evolved several physical features that help them dive into the water and remain there.

Ducks are split into two categories:

Dabbling ducks can’t hold their breath for very long. These simply stick their head into the water, looking for food near the surface.

Diving ducks, on the other hand, can hold their breath for up to a minute.

Ducks who dive into the water use an air sac that fills with air instead of taking in water. This keeps them from drowning while they are under, and also acts as a buoyancy control device.[4]

Diving ducks also have a larger skull and bill, which gives them more storage space for air.

Ducks float due to several natural adaptations. They have hollow bones and can trap air with their interlocking feathers. In the end, it comes down to the fact that their density is lighter than that of water.

Some ducks also have air sacs, which they can fill up with air to provide them with extra buoyancy.