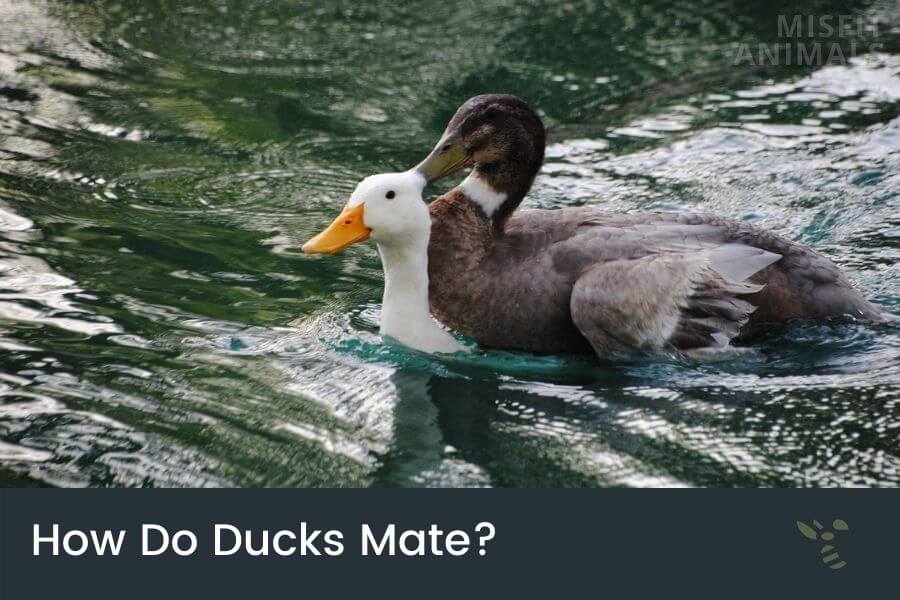 Male ducks begin mating by courting the female. As females are in charge of picking a mate, males need to be colorful, as well as do a mating dance and call. If she doesn’t pick him, he may just force her instead.

Ducks are a common sight in many parts of the world, and for the most part, they are considered gentle creatures. However, when it comes to mating, ducks can be downright vicious.

The reproductive ways of ducks are definitely not for the faint of heart.

In this blog post, we’ll take a look at how ducks mate and some of the horrifying facts about their mating rituals.

How Do Ducks Mate?

Ducks mate by copulation, where the male climbs onto the back of the female. His reproductive organ is spiraled and grows out during the mating season. If the female duck doesn’t cooperate, it may end in fatality.

Ducks are known for their mating process, as to how they mate is fairly interesting. As there are more males than females, it all begins with a courting ritual.

The duck mating process starts with how the female gets ready by preening its feathers and shaking off excess water. Then the male joins in and performs several rituals to court her.

Male ducks are first and foremost judged on their looks. They need to be colorful to attract females. The more colorful and beautiful they are, the better their chances are.

The male will also shake his body and repeatedly stretch and withdraw his neck to show how healthy he is. This is the mating dance.

Lastly, the male duck will do a series of mating calls.

Now, if the female duck accepts the male, they’ll start mating. However, if she rejects him he’ll have to find someone else – unless he chooses not to.

As there are more males than females, the males sometimes take part in forced group mating. These are socially organized “gang rapes” that are “violent, ugly, dangerous and even deadly”, and may result in the death of the female. [1]

The female may drown, or simply die due to the sheer force of the males.

How Do Ducks Mate in Water?

Ducks like to mate in water. This is natural to them. They have a very interesting mating process that takes place in the water.

It all starts with courtship. If the two ducks are interested in mating with each other, they’ll start “head-pumping” together, swimming around each other.

This is how the ducks show each other that they are ready to mate.

The male duck will then mount the female from behind and start to thrust his tail feathers in and out of the water. By doing this, he forces the female under the water. This rarely results in death, unless the female is attacked by a dozen or more males.

How Often Do Ducks Mate?

Ducks mate once a year, typically between March and July. They change their mate each year, as they practice seasonal monogamy.

As ducks find new mates each year, it means that they don’t mate for life. After mating, the female will take care of her ducklings.

How Many Times a Year Do Ducks Mate?

Ducks form seasonal bonds instead of monogamous bonds. This means that ducks will mate with an individual during the winter, but that they’ll split apart once summer comes around. [2]

The next winter they’ll then find a new mate.

Studies have shown that the average duck will mate around six to eight times during a breeding season, though there can be some variation depending on the species of duck and the location where they live.

Ducks can lay eggs once a day. These are fertile if the female has mated with a male duck, and unfertilized where no drake is present.

Unfertilized eggs are eggs that have not yet been fertilized by male sperm. Hence, these types of eggs will never hatch a duck.

If the female duck has mated with a drake and has stored up sperm, the eggs will come out fertilized.

Do Ducks Mate in Water or on Land?

While ducks prefer to mate in water, they may also do so on land.

Ducks are waterfowl, meaning a major part of their lives revolves around the water.

It’s not uncommon for ducks to mate in water, but they can also be found mating on land, especially during nesting season. The nests of ducks are usually built on land, and the eggs are laid and hatched there as well.

When ducks mate in water, the female is often forced under the water, which can result in her drowning.

Do Ducks Drown Each Other When Mating?

Yes, ducks do drown each other when mating, though not intentionally. When the male climbs on top of the female, his weight pushes her down, which can result in death.

Mating among ducks is a violent affair, and the males are known to be quite aggressive with each other. There are even social groups where the males take part in forced copulation with a female. [3]

It’s during these mating sessions when a female is truly in danger.

When the mating has been done, and the many males swim away from the female, she’ll arise bloody and tired, if she didn’t die.

How Do Ducks Select Their Mate?

The female duck selects a mate, as the males take part in a mating ritual to court her. She’ll decide based on color, dance, and call.

When it comes to how ducks select their mate, it’s the female who makes the decision.

Males will often try to court as many females as possible, but it’s ultimately up to the female whether or not she chooses to mate with him.

At What Age Can Ducks Start Mating?

Ducks are able to mate at around six months of age. However, in some cases, they may not be ready until they are a year old. The male ducks will start chasing the female ducks once they reach sexual maturity.

Ducks need to be sexually mature before they mate. Ducks don’t mate for pleasure, but to procreate.

Depending on what month ducks hatch, the ducklings will mature faster.

Do Ducks Mate for Life?

No, ducks do not mate for life. They find new mates each season and hence take part in seasonal monogamy.

Ducks do not form long-term pair bonds. While they can form mating flings and may even become attached to another individual, ducks will mate with several other birds throughout the entirety of their lives.

Mating for ducks begins in the fall, once temperatures drop and leaves begin to change color. Ducks will flock together and look for a place to settle down and create a nest.

Males will attract females by performing courtship displays, such as swimming in circles around the female while making noise.

Once pair bonds are formed, males and females will create nests out of grass and twigs.

Ducks are, in the traditional sense, not monogamous. However, they typically only mate with a single mate in a season, meaning they’re seasonal monogamists.

Ducks do not form long-term pair bonds. However, they form seasonal bonds, meaning they only mate with a single duck per season.

Hence, they’re not traditional lifelong monogamists, where they only have a single mate throughout their lives, but they still only have one mate at a time.

While ducks are not technically monogamous, they do generally stay together for the duration of the breeding season.

They often return to the same nesting and mating grounds each year as well.

So, why do ducks return to the same nesting areas year after year?

One theory is that it is because of the quality of the food resources in specific areas. Ducks may also return to the same spot because they feel safe there and they know that they will be able to find a mate easily.

How Many Ducklings Do Ducks Have?

Once the eggs are laid, the mother duck will sit on them until they hatch. This process can take up to 28 days.

The father duck will help take care of the ducklings once they hatch. Ducklings are able to swim and feed within a few hours of hatching.

How Long Are Ducks Pregnant?

Incubation takes about 28 days for ducks, with the Muscovy ducks having the longest incubation time of 36 days.

After mating, the female will lay her eggs somewhere safe. She will then incubate them for about 28 days, during which time she will not eat, drink or leave the nest. [4]

Can Ducks Lay Eggs Without Mating?

Yes, female ducks can lay eggs without mating but they won’t hatch into ducklings without a drake.

Ducks can lay unfertilized eggs, and often do so on farms.

Do Male Ducks Sit on Eggs?

No, the drake does not sit on eggs. The male duck will protect the female, the nesting area, and the eggs, but he won’t sit on eggs.

Once the female duck has laid her eggs, she’ll cover them with some vegetation and begin incubation. Hereafter, she won’t do much.

Ducks begin mating with a selection process. Here, the drake will have to court the female. If he’s successful, they’ll mate. If not, he may force copulation. When this happens, multiple males will force themselves onto a female. This can result in the death of the female.

Ducks typically mate between March and July, and will hereafter lay their eggs and incubate them.

They don’t mate for life but will switch mates each year.