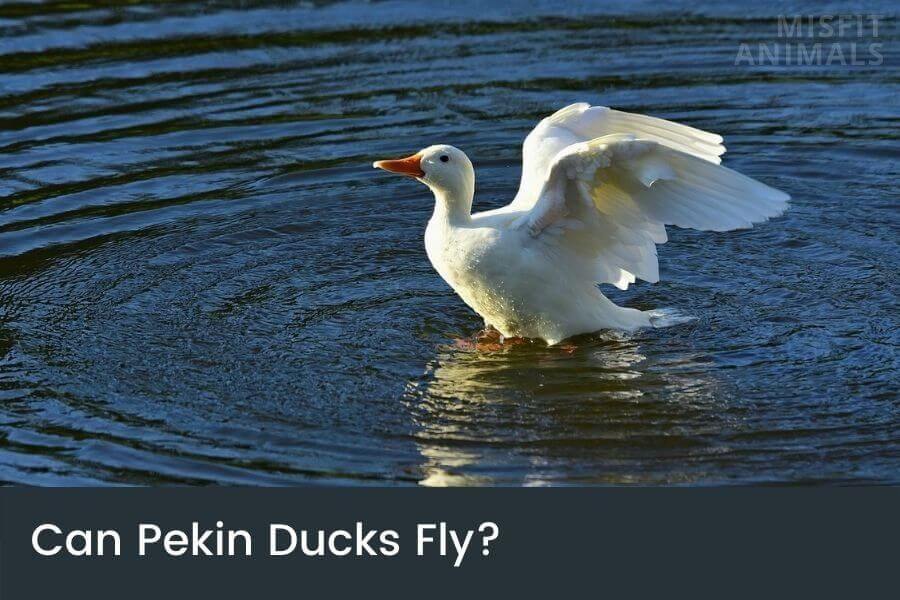 No, Peking Ducks can’t fly. They’re typically too heavy, as they have been bred for domestication. It does happen that individual ducks are light enough to fly. When this happens, their feathers are clipped.

Ever wondered why some ducks can fly and others, like Pekin ducks, can’t?

It turns out that most domesticated duck breeds can’t fly because they’ve gotten too heavy for flight through breeding.

Pekin ducks are used as domestic ducks, hence the farmers don’t want them to fly away. For a long time, their wings were also clipped.

In this blog post, we’ll explore whether or not Pekin ducks can fly and why they might not be able to. We’ll also take a look at some of the other interesting facts about these domesticated ducks.

Pekin Ducks can’t fly. They can run very fast, but they can’t fly at all. This is due to their heavy bodies relative to their small wings.

Hence, they’ve been bred to be very heavy, as heavier ducks provide more meat, resulting in more revenue for the farmers.

This commercial breeding has resulted in Pekin ducks’ weighing much more than they would in the wild, resulting in loss of flight.

How High Can Pekin Ducks Fly?

While Pekin ducks typically can’t fly, it doesn’t stop some from trying. When they do, the domesticated breed can fly 2-3 feet into the air.

Domestic ducks have been bred over centuries to be larger, meatier, and have more feathers, which means they can’t fly as fast or high as their wild counterparts.

Pekin ducks can’t fly because they’re too heavy and too large. Due to domestication and breeding, they’ve gotten heavier and heavier over the years.

Ducks are normally known for flying around and quacking a lot. However, the breed of duck known as a Pekin cannot fly at all.

While ducks are generally heavy and have adapted their way of flying to their weight and wingspan, Pekin ducks are too heavy.

Ducks have smaller wings than most other birds, and hence have to flap them a lot more while flying. They can’t soar like hawks.

Pekin Ducks Weigh Too Much to Fly

A Pekin duck weighs too much to fly. Because of their weight, they can’t support their own themselves while flying. [2]

The average adult Pekin duck usually weighs about 8 to 12 pounds but can weigh even more if allowed to live longer.

Pekin Ducks Are Too Large for Flying

Combined with their weight, Pekin ducks also have too large bodies to fly.

Their wings are too small relative to their body and hence can’t produce enough lift to get off the ground.

As a result, they are forced to rely on their webbed feet to move around.

Not only do Pekin ducks have small wings, but they’re also weak.

Normally, ducks’ wings are the same length as their bodies; this is not great for soaring through the air, but good enough for flying. The lack of length seen in Pekin ducks makes them extremely prone to muscle fatigue and incapable of flying more than a very short distance, if at all.

Pekin Ducks Do Attempt to Fly

Pekin ducks are interesting creatures. Even though they can’t fly, they still attempt to do so from time to time. They do this because they’re trying to go somewhere.

Research shows how Pekin ducks may exhibit stress-induced hypothermia if they can’t reach their nest. [3]

When Pekin ducks attempt to fly, they may reach 2 to 3 feet into the air, but that’s also the maximum capability for most of them.

What Do Pekin Ducks Use Their Wings For?

As Pekin ducks can’t swim, they still use their wings. One of the main functions of a Pekin duck’s wings is to help them swim.

Pekin ducks, like all other ducks, also have a protective coating on their wings, which helps them stay dry and warm in the water. They’re essentially waterproof. It also helps them stay buoyant and afloat in water.

Should I Clip My Pekin Ducks Wings?

It’s a good idea to clip the wings of Pekin ducks if you’re afraid of it flying away. While this typically doesn’t happen, it might. Clipping its wings assures that it can’t escape.

One question that often comes up when people are considering getting ducks is whether or not to clip their wings. Some people recommend clipping the wings of Pekin ducks, but is it really necessary?

The answer to that question depends on a few factors:

In the end, whether or not to clip your ducks’ wings depends on what you plan to do with them.

If you want to clip their wings, here are some good rules to follow:

Can Pekin Ducks Survive in the Wild?

No, domestic Pekin ducks can’t survive in the wild. They’re also too heavy to fly, and hence won’t survive for long.

Although many people keep these ducks as pets, they are originally bred for meat and egg production. If these domesticated animals were to escape into the wild, survival may be short-lived.

The more likely scenario is that they would become food for predators, as they’ve gotten used to being fed and taken care of by humans.

No. Pekin ducks do not migrate. Migration seen in birds typically requires flight, as they’re too slow on foot. Pekin ducks are stationary birds.

As Pekin ducks are often found in captivity, they don’t get the chance to migrate. As they can’t fly either, after being fed up, there’s no way for them to migrate.

Pekins are considered to be good pets because they’re friendly, can be trained to eat out of your hand, and enjoy spending time with their owners.

Ducks are generally very social animals and like to be around other animals or beings, as long as they aren’t threatened.

Ducks are not great pets for first-time or novice pet owners though. If you’re considering adding a duck to your family, be sure to consider the following:

The main reason Pekin ducks can’t fly is that they are very heavy, and have unusually short wings for their body size. They also lack the muscles needed to take flight.

Pekin ducks are bred as domestic ducks and have hence gotten heavier and heavier over several years. Now, the longest flight most of them have is about 2 to 3 feet up into the air.

Due to their inability to fly, they also don’t migrate, and typically don’t need to have their wings clipped.