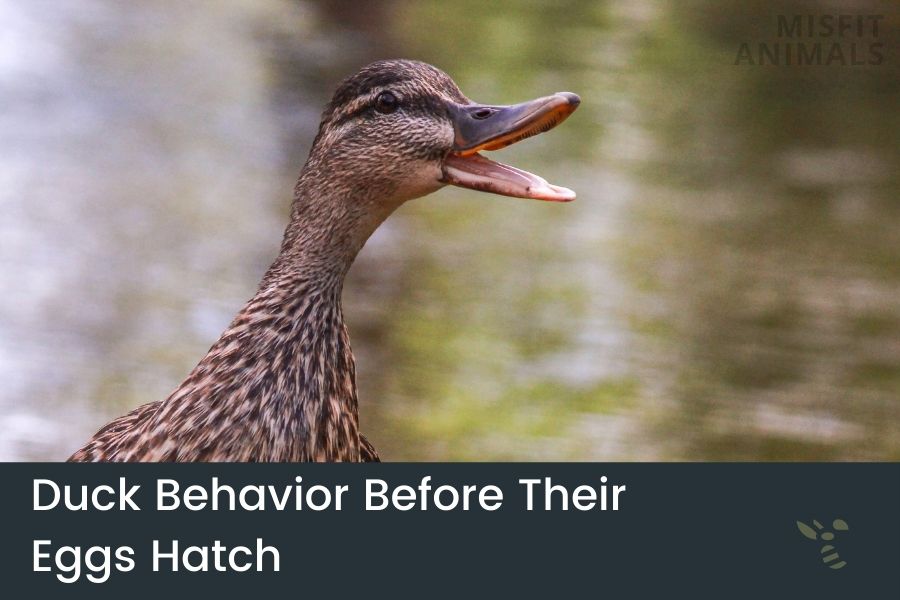 Female ducks will feed before laying eggs. They’ll also pluck their own feathers to reveal the brood patch, sit quietly on their eggs, and protect them aggressively.

What do ducks do before their eggs hatch? While some believe that they just sit around, waiting, this is not entirely true.

Ducks do incubate their eggs, meaning they sit on them to keep them warm, but that’s not all.

In this article, we’ll discuss the incubation and nest behavior of ducks. We will also explore some of the fascinating things that happen before ducklings are born.

Incubation is the process of keeping an embryo warm so it can grow.

Eggs are incubated by females of many different species. There are two types of incubation: brooding and non-brooding.

There are many species of ducks that use both brooding and non-brooding incubation to hatch their eggs, including:

How Do Ducks Act Before Laying Eggs?

Before a duck lays her fertilized eggs, she’ll eat up to build a fat reserve. She’ll also experience a natural expansion of the pelvic bones.

Duck mothers incubate their eggs. This process takes about 28-31 days[1]. After this period, ducklings will begin breaking out of their shells and will continue to be raised by their mother.

Here’s what happens before then.

Ducks Will Eat a Lot

Duck mothers will eat a lot to stock up on nutrients for the egg-laying and incubation period.

Duck mothers lay their eggs in nests they’ve made or found, and then they incubate them by keeping them warm with their bodies until ducklings hatch from the eggs.

Because ducks don’t want to leave their nests for too long, when they’re incubating, they’ll eat up beforehand. This allows them to sit longer on the eggs.

During the time just before laying eggs, a duck’s whole body will undergo physical preparation. Their pelvic bones loosen up and become wider in order to accommodate an egg.

Their cloaca (the end of the digestive, reproductive and urinary tracts) also separates slightly to create an easier passage for the egg.

Once the time comes to lay eggs, a female duck will squat so that her vent is at ease to push out the egg. She will then start using her legs in order to move backward slowly while laying the egg. The duck will then walk forward a little bit to reposition herself and continue laying.

How Do Ducks Act During Incubation?

During incubation, the female duck will sit on her eggs as much as possible. She’ll pluck her own feathers, sit quietly on the eggs, and protect them aggressively if anything or anyone approaches.

Ducks use a process known as incubation to keep their eggs warm so the baby ducks can grow inside of them.

They use their own body heat to keep the eggs at optimal temperatures.

Here’s what happens while they sit on the eggs.

Once a duck becomes broody, she will begin plucking her own feathers from her belly and arranging them in the nest for insulation. The female duck also reveals a brood patch by doing this[2].

The brood patch is a bare spot that passes heat directly to the eggs. This optimizes heat exchange.

She’ll rearrange her eggs throughout the incubation period to make sure all eggs get enough heat.

Ducks Will Sit Quietly on Their Eggs

During the entire incubation period, ducks will sit quietly on their eggs and rarely move from them.

Ducks are completely quiet during incubation if left alone. If you get close, they’ll start quacking though.

The only time they’ll leave their eggs is if a predator comes along or to gather food.

While the majority of a duck’s life is spent being rather passive, they’ll do whatever it takes to protect their young during incubation[3]. If you get too close to a nest containing eggs, an incubating female will be very aggressive.

These ducks claim territory for nesting and will repel other animals, including other ducks.  If you come too close, they’ll stretch out their wings and begin hissing.

If you don’t back away, they’ll snap at you with their bills or even attack.

During incubation, ducks take small breaks away from their eggs. They’ll take breaks two to three times a day, to feed and drink.

Furthermore, the female duck needs to preen during these breaks.

How Long Do Ducks Sit on Eggs?

Ducks sit on their eggs for 28 to 31 days on average, depending on the species.

A female duck, also called a hen, usually incubates her eggs for 28 to 31 days. During this time she doesn’t eat or drink much and she becomes very aggressive towards anyone who gets close to the nest.

The duck loses a significant amount of weight during the process due to a lack of food and water.

Do Ducks Sit On Their Eggs Until They Hatch?

Ducks are known for their willingness to sit on their eggs until they hatch. This typically takes 28-31 days.  During this time, ducks almost won’t eat or drink anything. Instead, they live off of energy stored in their bodies.

If the eggs take too long to hatch, they may be left behind though. The mother will know that the duckling inside the egg is dead.

Do Ducks Move Their Eggs?

Ducks may rearrange their eggs, but they rarely don’t move them to a new nest. This only happens in extreme situations.

Do ducks move their eggs? If so, how do they move them?

The female may rearrange her eggs from time to time to make sure they’re all in contact with the brood patch to keep them warm.

Ducks typically don’t move their eggs though, as they’re very fragile and can easily break. They’ll do whatever they can to protect their nest against predators, or other threats.

Only under extreme circumstances will a duck try to move her eggs. This may be because of predators, or because of extreme weather conditions.

Do All Duck Eggs Hatch at the Same Time?

As the eggs will hatch one at a time, her mother has time to care for each new duckling when it emerges from its shell.

Do Male Ducks Sit on Eggs?

Male ducks do not sit on eggs. However, a drake may stand guard over the nest to protect the ducklings from predators until they hatch.

Male ducks don’t play a big part in ducklings’ lives. After mating, a drake will stay with his mate for approximately 10 days before leaving.

They do this to ensure that the eggs are safe, however, they won’t stay for the full duration of incubation.

What Time of Day Do Ducks Lay Eggs?

Ducks typically lay their eggs in the night or in the early morning. Hence, the best time to collect eggs is in the morning.

Ducks lay their eggs at night, or in the early morning, much like chickens (chickens lay eggs in the morning, typically within 6 hours after the sun rises).

Hence, if you keep ducks, make sure to collect them in the morning. This should be done to avoid them becoming too dirty, as well as to avoid breakage.

How Do You Know When Duck Eggs Are About to Hatch?

Some indications that a duck egg is about to hatch include reddish coloring, distinct veins, and a visible bill. You can use a flashlight to enhance these features.

Incubation is a delicate process. Slowly, ducklings will develop inside the eggs.

There are a few ways to tell when the eggs are about to hatch:

If you can’t see any of these features, try placing a flashlight behind the egg. This will allow you to get a better view inside the egg.

Can a Mother Duck Raise Ducklings From Another Mother?

No, a duck won’t raise ducklings laid by other ducks. They’ll only raise their own ducks.

While incubation can technically be done by another duck, they simply won’t. A duck would also be able to take other ducklings under her wings, but again, they won’t do this.

Ducks don’t have the same maternal instinct for other ducklings as for their own.

Incubation is the process of passing body heat from the mother to the eggs. This takes approximately 28 to 31 days, depending on the species.