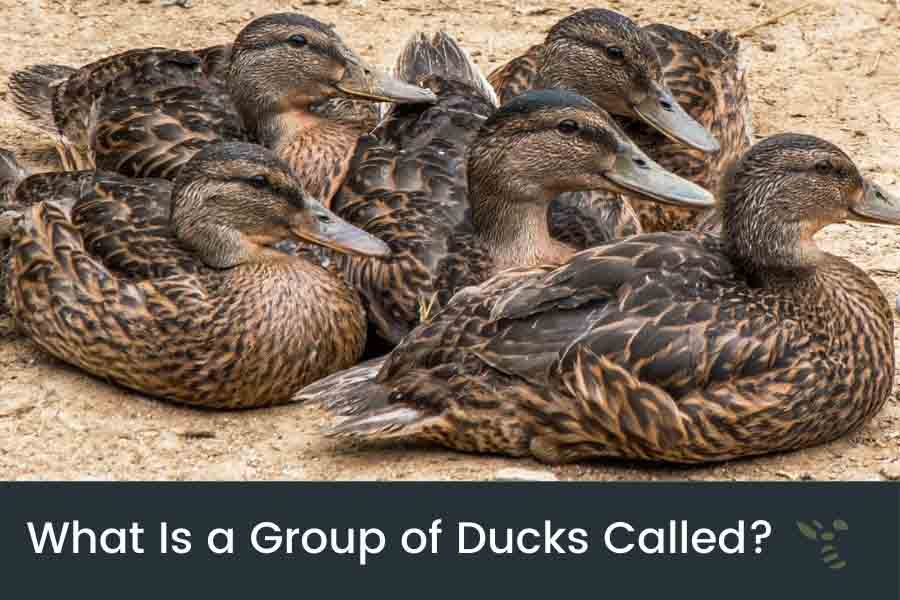 Do you know what a group of ducks is called? If not, don’t worry, you’re not alone.

A group of ducks is called many things. If you want to be correct about your terminology, you should know a couple of names.

In this article, we’re going to take a look at the different terminology used for groups of ducks and other waterfowl.

What Is a Group of Ducks Called?

A group of ducks is referred to as a flock, team, paddling, brace, raft, or sold.

The name typically depends on three factors: how many ducks there are in the group, what types of ducks it is, and what they’re doing.

A Raft of Ducks

A raft of ducks consists of multiple ducks that are swimming.

The term “raft” comes from the Old Norse word what means “multitude.”

It’s also used because of the way ducks swim together. They like to stay close to each other, as this provides safety and protection. Hence, as they swim together in a group, it looks like a raft.

A Brood of Ducks

A brood of ducks is a group of ducklings. They may also be called a flock or a waddle of ducks.

Ducklings stay close to their mother, for the same reason why ducks generally keep in groups: for protection and safety. A mother duck also provides her ducklings with heat.[1]

Related: What are baby ducks called?

A Flock of Ducks

A flock of ducks is a larger group of ducks. This is typically seen when they migrate.

The word flock is defined as:

“a number of birds of one kind feeding, resting, or traveling together.”

However, not all groups of birds are flocks. Whether or not you can call a group of birds a flock depends on species and bird count. A group of 2 or 3 ducks can not be called a flock of ducks.

The term flock can also be used about ducks that are flying together. This is called a flight flock.

This is a general term used about birds. Some species have more specific terminology, such as a murder of crows, or a swarm of swallows.

A Puddle of Ducks

The terms puddle is also used about a group of ducks, typically associated with the act of swimming.

The term, “A Puddle of Ducks” is a collective noun used to describe a group of ducks. For instance, ducks in a park or in your backyard would be considered a puddle.

It’s typically used about a group of ducks that are swimming, though the term raft is more common.

A Skein of Ducks

A skein of ducks describes a group of ducks that are flying. The term can also be used for geese or other waterfowl.

The term “skein” refers to a piece of yarn of wool, which some people think ducks in flight resembles.

A skein of ducks, or other waterfowl, describes ducks flying. When they fly, they fly in a tight V-shaped formation. They do this to optimize their flight and hence use less energy.

More Names for a Group of Ducks

There are many names for a group of ducks:

What Is a Group of Flying Ducks Called?

A group of flying ducks is called a skein, flight flock, or a team.

Ducks, as a species, are social animals. They keep in groups, also when flying.

When they fly, they do so in a tight V-shaped formation. This can either be called a flight flock, a skein, or a team of ducks.

Diverse birds such as pigeons, geese, and other ducks can be found in a flock. Some researchers believe that this happens because flying with others and watching their reactions is an important survival mechanism for birds.

Birds fly in a V-formation because it’s more efficient. When birds flap their wings, the air immediately behind them gets pushed down. Hence, birds fly to the side of the bird ahead of them to avoid being pushed down, as it would require more energy to keep themselves up.[2]

What Is a Group of Swimming Ducks Called?

A group of swimming ducks is called a “raft of ducks”.

Ducks enjoy swimming. They’re waterfowl and spend most of their life around or in water. They stay in water because they feed on aquatic plants and animals.

As they often flock together, or group up, in larger groups, they end up resembling a raft. They simply look like one big body of mass floating across the water.

They do this both day and night, as it provides them with security and warmth.

What Is a Group of Baby Ducks Called?

A group of baby ducks is called a brood. A brood typically consists of 11 to 12 ducklings, always staying close to their mother.

Most commonly, the word “brood” is used to describe a group of baby ducks.      Broods can contain anywhere from two to fifteen ducklings.

A brood is defined as:

“​​a family of birds or other young animals produced at one hatching or birth.”

Hence, a brood consists of all the ducklings that hatched around the same time.

Brood is not only used for ducks, or birds, but also for insects such as ants and bees.

Why Do Ducks Keep In Groups?

Ducks keep in groups because it provides them with protection and safety. If a predator approaches, one duck will alarm the rest, and they can take off.

Ducks give us an excellent example of group behavior in animals. They keep in groups, which is especially beneficial for them to survive due to their lack of natural methods to fight off prey.

There are many reasons why ducks keep in groups:

When do Ducks Flock Together?

Ducks flock together at all times, both day and night while swimming or flying.

When we think about why groups of animals form flocks, we often first consider safety. The same goes for ducks.

When they stay in groups, they’re safer.

How Many Ducks Are in a Flock?

A flock of ducks is made up of anywhere between twenty to hundreds, or even thousands of ducks.

There’s no set limit of the number of ducks that can be in a flock. In the end, it comes down to food availability.

When there’s more food around, more ducks will join the flock. They’ll also mate more, and return year after year. This can result in some truly large flocks of thousands of ducks.

What Do You Call a Group of Mallard Ducks?

A group of mallard ducks can be called a flock, a group, a team, a raft, or any other terms generally used about ducks.

Mallard ducks are the most common ducks in the world, yet the same terminology is used about them as all other duck species.

A group of Mallard ducks can be called a flock, a raft if they’re swimming, or a skein if they’re flying (among other names).

If there are only two mallard ducks, they can be called a pair or a brace.

There are many ways to refer to a group of ducks, and it all comes down to the number of ducks and what they’re doing. A raft of ducks can be used to describe a group of swimming ducks, while a skein describes a group of flying ducks. The term “flock” is commonly used for ducks of all types.