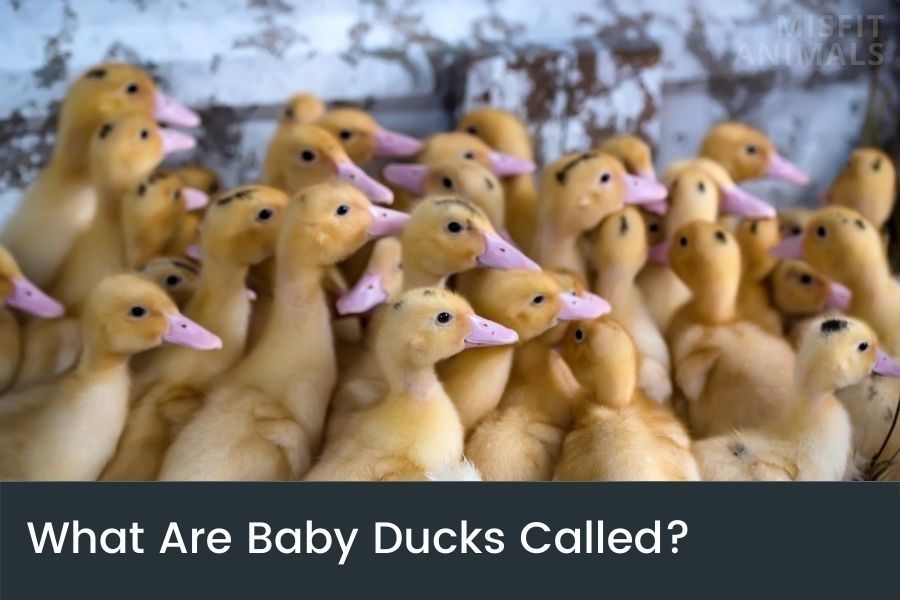 Baby ducks are known as ducklings. When they’re born, they are very small and have no feathers. They grow quickly, and can soon after birth both run, swim and forage for food.

If you’re a fan of bird watching, or just appreciate ducks in general, you may have wondered what baby ducks are called.

In this article, you can read more about ducklings.

Baby ducks are also referred to as “ducklings”.

As it is with all animals, the babies have other names than the adults. This is to easily differentiate between them.

Here are some names for different waterfowl:

A duck is a duckling until it’s fully grown. This takes about 9 to 12 weeks, where they’ll develop feathers and adult behavior.

What Is a Group of Baby Ducks Called?

A group of ducklings is called a brood. The term brood refers to a group of baby birds from the same hatching.

Ducklings are juvenile, or young, waterfowl. They hatch from eggs and live in the area around their nest until they can fly and forage for food on their own.

As ducks are social animals, there have been developed many names to refer to the entire group: raft, flock, team, brace, and so on.

The same goes for ducklings. Here, a group of ducklings is called a brood.

Ducks live in groups for most of their life, as this provides them with protection and safety. When they’re young, they also get food and warmth from their mother.

Related: What is a group of ducks called?

Other Names for a Group of Ducks

There are plenty of names for ducks. Most people just refer to them as a group, while another term often used is “flock”.

Other names for this group may include:

The name of a group of ducks depends on how many there are, as well as what they’re doing.

A raft, or paddling, of ducks, is a larger group of ducks in the water. This is because they look like a raft when grouped together.

A flight flock, or a skein, is used about a group of flying ducks.

Ducklings are very small and have the same body structure as adult ducks. They’re often yellow and brown, as this is the typical color of ducks’ down feathers. They don’t have contour feathers until after 7 to 9 weeks.

Ducklings may vary slightly in appearance, depending on the species, but there are some things that they will all have in common:

Most people think ducklings are completely yellow. This is a trait in domesticated Pekin ducks, which they have developed through selective breeding.

At just a few days old, baby ducks are almost completely covered in what looks like short, fluffy yellow and brown fur. This is called down feathers.

The only parts of the duckling that aren’t covered in this furry material are its bill, feet, and eyes – all of which start out looking pink because they haven’t been exposed to the elements.

Later, they will develop contour feathers, which are sturdy outer feathers. These are used to protect them against the weather, as well as to fly.

In the wild, ducklings can start to swim when they’re one week old. In captivity, they need to develop their feathers first.

When ducklings are just one week old, they’ll start playing around in the water. But whether they can swim or not depends if they’re raised by their mother.

Ducklings are naturally gifted swimmers. They instinctively know what to do, and they also learn from their mother.

Ducklings swim behind their mother because she secretes preen oil. This is a special oil secreted in ducks’ oil glands. When applied to their feathers, they become waterproof. Without this, ducklings would drown.[1]

While adult ducks can secrete this oil themselves, ducklings cannot. Hence, the mother will secrete the oil into the water, whereafter the ducklings will be coated in it.

In captivity, when they don’t have their mother around. Hence, they can’t swim right away. They need to develop their feathers first.

Ducks swim using their webbed feet. These are natural adaptations that help them swim better. Ducks have palmate feet, which have three front-facing toes connected with webbing.

What Do Baby Ducks Eat?

Ducklings are omnivores, eating both plant matter and animal matter. They typically feed on aquatic plants and small insects in the wild.

Once ducklings hatch, their diet must consist of foods that are easily digestible and nourishing. They also need a lot of protein to grow.

If food is scarce or food quality is low, baby ducks may even eat their own eggshells.

If you’re raising ducks yourself, you may feed them duckling pellets, or duckling/chick starter.

Provide your ducklings with shallow, wide dishes for feeding and water. Baby ducks can drown very easily, so ensure that the water is no deeper than two inches at the most.

As ducklings need to eat a lot, they’re often fed by the free-feeding method, where food is left out all of the time.

Related: What do baby ducks eat?

Can You Raise Baby Ducks at Home?

Yes, you can raise baby ducks at home. Make sure you have the right equipment, and that you provide them with proper care, food, and water.

Ducks can be raised both indoors or outdoor, though you need some equipment (more on that in the next section).

Incubating and hatching duck eggs requires work and patience, so make sure you have time.

Ducks are very social animals, so it’s generally advised to raise multiple ducklings at a time. Otherwise, you need to be around them at all times.

Related: Baby Ducks & How to Raise Them

What Do You Need to Raise Ducks?

Ducks are very gentle creatures and can be very entertaining to keep as pets. Though you do need some patience – and equipment.

Raising ducks is not science. However, there are some factors that you should consider before you go out and buy ducklings or duck eggs to raise for your own personal use or enjoyment.

Baby ducks are known as ducklings. When they’re newborns, they only have a small layer of down feathers to help keep them warm. Once they get older, they’ll develop larger feathers.