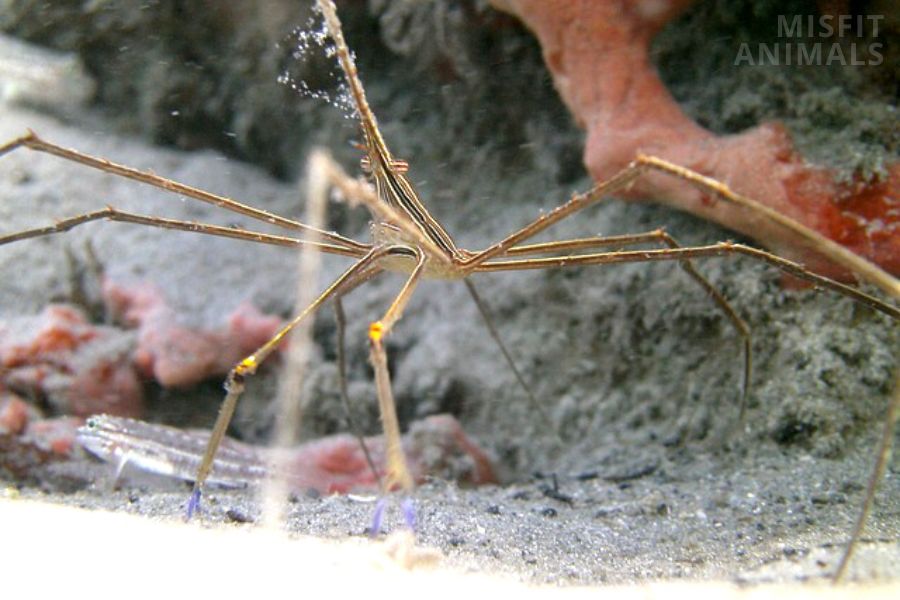 Some animals eat plants, some eat meat, and others eat both. And some eat algae. But what animals eat algae? And what even is it?

In this blog post, we’ll introduce you to seven of the quirkiest animals that eat algae. We’ll also take a look at how it affects them.

Algae is a plant that grows in water. It is often found in ponds and lakes. Algae is an important food source for many animals.

Amano Shrimps are one of the most popular shrimp in the aquarium trade. They are known for their algae eating habits and their ability to help keep tanks clean.

The shrimps are originally from Asia, found in freshwater streams and rivers.

Amano Shrimps are a great addition to any tank as they keep it clean and free of algae. They are peaceful and can be kept with a variety of other fish and invertebrates.[1]

They are also active and are constantly on the move looking for food.

The Nerite Snail is a type of snail that is known to eat algae. These creatures are found in freshwater tanks and help keep the water clean.

If you have an aquarium, it is recommended to get a Nerite Snail as it will help keep your tank looking neat and tidy.

There are many different types of Nerite Snails, but the most common one is the Zebra Nerite Snail. These snails are black and white in color and have striped shells. They are known to be one of the best algae eaters out there.

Arrow crabs are a type of crab that is known for their ability to eat algae. These crabs are found in tropical and subtropical waters around the world.

The crabs are often kept as pets by aquarium enthusiasts because of their attractive appearance and their ability to help control algae growth in the tank.

Arrow crabs are not true crabs. Instead, they are a type of decapod crustacean.[2] They get their name from their long, slender legs that resemble arrows. Arrow crabs range in size from about 2 inches to 4 inches in length.

The Florida Flagfish is a type of fish that is known to eat algae. These fish are native to the state of Florida, and they are often used in aquariums and ponds because of their ability to control algae growth.[3]

There are many different types of algae, and each type has a different effect on the fish that eat it. Some types of algae are harmful to fish, while others can be beneficial.

The bumblebee snail is a species of sea snail that feeds on algae. They are found in tropical and subtropical waters around the world.

Bumblebee snails are important members of the reef community as they help to keep the coral clean and free from algae growth.

The Bumblebee Snail is a small creature, typically only growing to be around an inch in length. The body of the snail is a dark brown or black color with yellow stripes running down the length of the shell. The head of the snail is also yellow and has two long, thin tentacles.

The Chinese algae eater (Gyrinocheilus aymonieri) is a freshwater fish that originates from rivers in China. It is a member of the carp family and can grow to be about 12 inches (30 cm) long.

This is a bottom-dweller that feeds on algae, small invertebrates, and detritus. It is a popular aquarium fish but can become aggressive towards other fish as it matures.

The Molly Fish is a type of freshwater fish that is known to eat algae. Molly fish are native to Central America and the Caribbean, but they are found in aquariums all over the world.

Molly Fish is a popular choice for aquariums because they are peaceful and easy to care for. They are also one of the few types of fish that can tolerate a wide range of water conditions.

Molly Fish are omnivores, which means that they will eat both plants and animals. In the wild, Molly Fish primarily eat algae. However, in captivity, they will also eat pellets, flakes, and other prepared foods.

What Does Algae Eat?

There are many different types of algae, and each type has its specific diet. But in general, algae can be divided into two main groups:

Autotrophic algae get their energy from the sun, through a process called photosynthesis. This means that they don’t need to eat anything else – they can just live off of the sunlight.

Heterotrophic algae, on the other hand, get their energy from organic matter. This could be things like dead leaves or even other living organisms.

So, what do algae eat? It depends on the type of algae. But in general, autotrophic algae only need sunlight, while heterotrophic algae need some sort of organic matter.

What is an Orange Algae Eater?

The orange algae eater is a type of suckermouth catfish native to freshwaters in South America. These fish are found in slow-moving rivers and streams with plenty of vegetation. They get their name from their habit of eating algae off of rocks and plants.

Orange algae eaters are peaceful fish that do well in community tanks. They are not picky eaters and accept most types of food, but they do need some algae in their diet to stay healthy.

These fish grow to be about 4-6 inches long and have a lifespan of 5-8 years.

If you are looking for a hardy and attractive fish for your freshwater aquarium, the orange algae eater is a great choice.

If you have green algae in your freshwater aquarium, then nerite snails are a great way to get rid of it. These small creatures are easy to care for and they don’t need any special food or care.

Red algae, also known as Rhodophyta, are a large group of marine plants that get their red or purple color from pigments in their chloroplasts. These pigments help the algae absorb sunlight for photosynthesis. Red algae are an important food source for many marine animals, including Bristletooth Kole tangs.

Bristletooth Kole tangs are a type of fish native to the reefs of the Indo-Pacific region. They are named for their large, bristly teeth, which they use to scrape algae off of rocks and other surfaces.

The fish are herbivores, meaning they only eat plants. In the wild, their diet consists mostly of algae, including red algae.

If you own a saltwater tank, Bristletooth Kole tangs are a great addition to your cleanup crew. They help keep your tank clean by eating algae, including red algae.

If you are looking for a fish that can help control algae growth in your tank, a Bristletooth Kole tang may be the perfect choice for you.

What Is a White Algae Eater?

A white algae eater is a type of freshwater fish that is commonly used to help control algae growth in aquariums. These fish are native to South America and have a lifespan of 5-7 years.

White algae eaters are known for their voracious appetite for algae, which makes them an ideal addition to most aquariums.

While they consume all types of algae, they prefer soft, green algae.

If you are looking to add a white algae eater to your aquarium, it is important to purchase one that is captive-bred. This ensures the fish is acclimated to an artificial environment and will be less likely to succumb to stress or disease.

Wild-caught fish are often not as hardy and may not do as well in captivity.

Algae-eating animals come in all shapes and sizes, from tiny water fleas to giant whales. These creatures play a vital role in keeping our waterways clean and healthy by consuming massive amounts of algae.

Some of the animals that eat algae in this article include shrimp, snails, crabs, and other crustaceans.