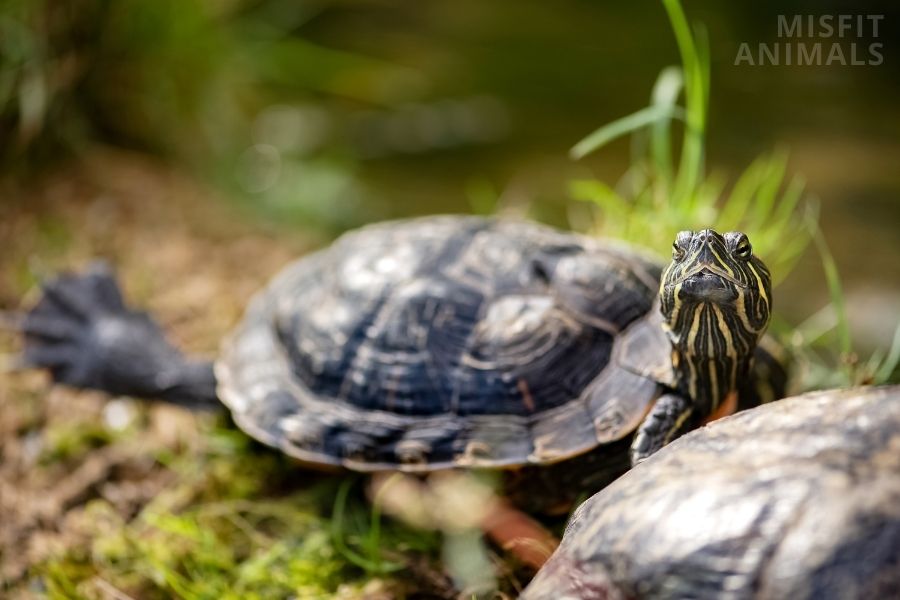 Red-Eared Sliders do not hibernate. Instead, they undergo brumation, which is similar to hibernation but exclusive to reptiles. A turtle’s metabolism, heart rate, and breathing all slow down drastically during brumation due to cold temperatures.

Many people think that red-eared sliders hibernate, but they don’t. They brumate instead.

Like hibernation in mammals, brumation is a period of inactivity that reptiles go through during the winter months.

Brumation is a significant behavior that all turtle owners should be knowledgeable about.

If you have a pet red-eared slider, you need to understand the signs of approaching brumation and whether or not they could (or should) brumate in captivity.

Red-eared sliders do not hibernate, but they do brumate.

Endothermic mammals such as bears, rodents, and bats enter a deep hibernation sleep. In contrast, ectothermic reptiles (like turtles) experience a state of extremely low activity and body function–but they are not sleeping.

Mammals hibernate to conserve energy, whereas reptiles brumate when they physically cannot metabolize energy due to a lack of heat and food sources.[1]

Why Do Red-Eared Sliders Brumate?

Red-eared sliders brumate to survive cold temperatures. As ectotherms, they require external sources of heat to function. During winter, they brumate and lower their metabolism, heart rate, and respiration to conserve energy.

Brumation is a vital survival adaptation of reptiles in cold temperatures. Ectothermic (cold-blooded) turtles require external heat sources (the sun or heat lamps) to power their metabolism and bodily functions.

Without heat, they do not have the energy to perform essential life functions such as digestion, respiration, and any physical activity.

To conserve energy during winter, when heat sources are scarce, turtles enter brumation, a period of dormancy when all of their functions slow drastically. They survive on fat reserves to power low respiration and metabolism rates during this time.

This keeps them alive until temperatures increase.

What Happens When Red-Eared Sliders Brumate?

What happens during red-eared slider brumation depends on the environmental conditions. In extreme cold, all body functions are at a minimum, and the turtle does not eat or move. They may still eat and move a small amount in moderately cool temperatures.

Brumation is not a set state in the same way that hibernation is. The extent of brumation depends on the relative temperatures of the environment, and the activity levels can fluctuate daily in response to changes.

The response to brumation is

In temperatures that fluctuate from cold to moderately cool, red-eared sliders may still exhibit some activity such as eating small amounts and coming up for air.

In extreme cold, their cells utilize anaerobic respiration by transferring energy from glucose reserves. This small amount of energy maintains metabolism, respiration, and blood flow at a minimum to aid survival.

During this time, red-eared sliders need little oxygen. A red-eared slider cloaca can absorb small amounts of oxygen from the water to prevent using precious energy surfacing for oxygen.

When Do Red-Eared Sliders Brumate?

Red-eared slider brumation is an adaptation for the survival of cold temperatures, so it naturally occurs in the winter months. Brumation usually occurs between October and December but can start earlier or later, depending on local temperatures.

In the wild red-eared sliders, brumate through the coolest winter months. They enter brumation when the temperature drops and emerge when spring brings an increase in temperatures.

If kept outdoors, they brumate during winter if you experience cool enough temperatures.

What Temperatures Cause Brumation in Red-Eared Sliders?

Brumation is stimulated when environmental temperatures drop below 50˚F[2]. Anything below this level causes brumation to deepen and activity to reduce.

How Long Do Red-Eared Sliders Brumate?

The duration of brumation depends on how long the temperatures stay low. Generally, they brumate between 3–4 months over the late fall and throughout winter. This period may be shorter during mild winters.

In captivity, they brumate as long as their temperatures are low. Brumation can be interrupted by rising temperatures to normal levels.

Do Red-Eared Sliders Eat When They Brumate?

The levels of brumation vary based on the severity of the temperatures. In extreme cold, brumating red-eared sliders won’t move or eat. They may exhibit some activity such as eating small amounts in milder temperatures.

Pet red-eared sliders rarely experience extremely cold temperatures, so they often still eat even if they are brumating. Digestion processes are limited in brumation, so they should not overeat.

Excess food in the stomach before or during brumation can sit within the digestive tract, causing impactions or rot.

Do Red-Eared Sliders Brumate in Captivity?

Red-eared sliders brumate in captivity if the temperatures drop to below 50˚F. Brumation is a physically taxing behavior, so pet turtles do not need to brumate.

Many pet red-eared sliders are kept within aquariums indoors. In these environments, provided with heat lamps, the conditions are steady. The temperature usually remains the same all year round, so the sliders do not brumate.

Brumation only occurs in response to low temperatures, so if you think your red-eared slider shows brumation signs but the environmental parameters have remained the same, they need to see a vet.

Signs of Brumation in Red-Eared Sliders

Recognizing the signs of brumation in red-eared sliders help owners differentiate between natural behaviors and signs of sickness.

Should I Let My Red-Eared Slider Brumate?

Brumation is a strenuous period for red-eared sliders. The process puts a lot of stress on their body and depletes their energy reserves.  Red-eared sliders do not need to brumate to be healthy.

Some individuals can struggle with the demands of brumation and suffer negative health consequences.[3]

Red-eared sliders that should not brumate

Related: How to Take Care of a Baby Turtle

Breeders may use this cycle to ensure reproductive success, but red-eared sliders can breed successfully without brumation.

Ectothermic species like red-eared sliders rely on warm temperatures to power their metabolism and activity. Without it, they cannot function correctly.

To survive the harsh winters, red-eared sliders brumate. In the wild, they brumate at the bottom of water sources within the mud or sometimes under moist leaf litter on land.

If they brumate as pets, they do so at the bottom of their tank or pond or within dark, humid hides.

How Cold Can Red-Eared Sliders Get?

Adult red-eared sliders can survive temperatures of 15˚F for extended periods by utilizing brumation. Juveniles are less hardy and cannot tolerate temperatures under 20˚F. This lower cold tolerance, alongside their size, increases their mortality rate as hatchlings.[4]

These temperatures are only tolerable if they appear after a slow decline, such as the natural change of seasons. Sudden temperature drops can cause shock, which can be fatal in impaired individuals, especially hatchlings.

Sudden drops occur in the wild with unprecedented cold snaps and in captivity with loss of heat sources.

Does My Red-Eared Slider Need a Heat Lamp at Night?

Your red-eared slider does not need a heat source at night if the ambient temperature of its tank does not drop below 50˚F. The heat lamp provides correct lighting and temperatures during the daylight hours. Turning it off at night allows for a nighttime period.

This natural cycle of light and temperatures creates a natural circadian rhythm for your red-eared slider, promoting healthy sleep, growth, development, and activity.[5]

Red-eared sliders do not hibernate. They may enter a state of brumation to survive cold weather conditions. These turtles bury themselves in mud or debris during brumation and remain inactive for extended periods.

If you’re wondering whether or not your pet turtle is hibernating, the best thing to do is consult a veterinarian.