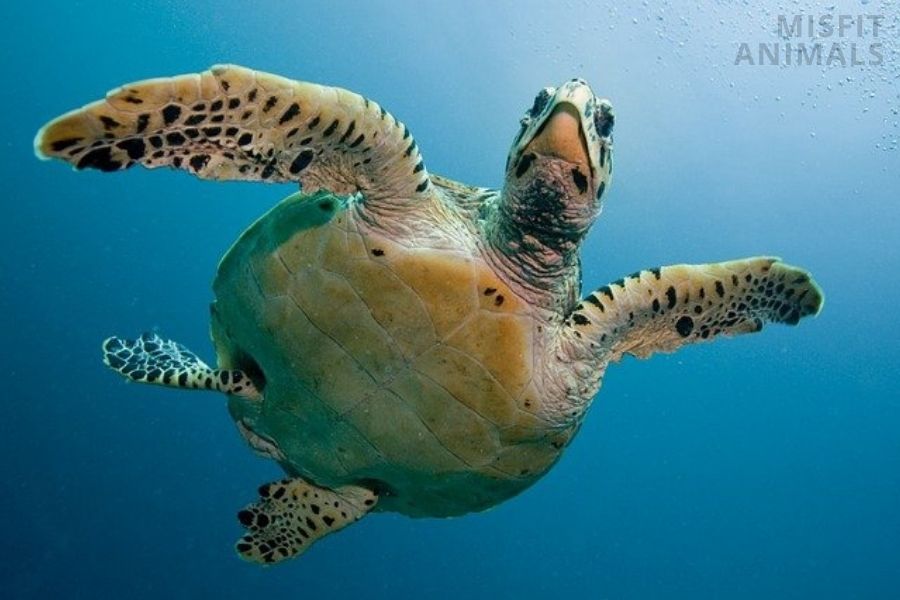 Sea turtles are 2 to 8 ft. in length, and weigh between 100 to 2,000 pounds. The biggest turtle is the Leatherback sea turtle, with the biggest ever recorded reaching 2,120 pounds.

Sea turtles are some of the most majestic creatures in the ocean. They come in seven different species, and each one is unique in its own way.

But how do they compare when it comes to size? How big are sea turtles really?

In this article, we will take a look at how big sea turtles get and what that means for their populations.

Sea turtles range in size from 100-to 2000 pounds. The size of a sea turtle depends on the species. The smallest sea turtle is the Kemp’s Ridley, with the biggest being the Leatherback sea turtle.

Each species of turtle has a different habitat, diet, and evolutionary adaptations. For example, the Flatbacks live only in Australia, while the other six species are found in oceans around the world.[1]

All seven species are endangered and the Kemp’s Ridley is the smallest and most endangered of all sea turtles.

Here are the seven species from smallest to biggest:

Are Male and Female Sea Turtles The Same Size?

How Much Do Sea Turtles Weigh?

What is the Length of a Sea Turtle?

Sea turtles range in length from about 2 feet to almost 8 feet. This varies depending on the species of turtle. The longest sea turtle is the leatherback, which can grow to be 7.5 to 8 feet long.

The table below shows the average weight and length of each species.

What Is The Largest Species of Sea Turtle?

The largest sea turtle is the leatherback. It can reach up to 7-8 feet long and 2,000 pounds.

What Is The Smallest Species of Sea Turtle?

The smallest sea turtle is the Kemp’s Ridley. It weighs about 100 pounds and is only 25 inches long.

The largest sea turtle on record was a leatherback turtle that weighed 2,120 pounds and was almost 9 feet long.[3]

How Big Are Sea Turtle Hatchlings?

Sea turtle hatchlings are some of the smallest creatures in the world and are extremely vulnerable to predation. It is estimated that only 1 in 1,000 hatchlings survive to adulthood.[4]

Sea turtle eggs weigh about 2 ounces each (57 grams). They are white or light tan in color with a leathery texture. The eggs are laid in a clutch of about 100-130 eggs and the mother sea turtle buries them in the sand.

After about 2 months, the eggs hatch, and the baby sea turtles dig their way to the surface.

When Are Sea Turtles Fully Grown?

Sea turtles are fully grown after 20 to 40 years. They grow slowly and don’t reach sexual maturity until 20-40 years.[5]

After hatchlings make it to the ocean, they enter what scientists called the “lost years” because so little is known about their whereabouts and what they’re doing.

They are likely to be floating through currents in the ocean, feeding on aquatic vegetation, and taking shelter in algae mats.

It’s not until they reach around 10 years old that sea turtles become juveniles and start to be seen near shore again, adopting a more specialized diet.

An average human is about 5.5 feet tall and weighs 150 pounds. The largest species of sea turtle, the leatherback, can get to be 8 feet long and 2,000 pounds. That’s heavier than 12 human adults.

The smallest sea turtle, the Kemp’s Ridley, is only 25 inches long and 100 pounds. That’s about the size of a five-year-old child and half the weight of an average human adult.

Why Do Sea Turtles Grow So Big?

Sea turtles grow to be so big because they live long lives—on average, around 50-70 years. They also have few predators once they reach adulthood, which leaves them to die of old age.

The colossal size of sea turtles is an advantage for the species because it means they’re less likely to be eaten by predators and can live longer, allowing them to mate and lay more eggs.

Parts of a Sea Turtle

Sea turtles have a number of physical adaptations that allow them to thrive in a marine environment. A large, streamlined shell protects them and reduces drag while swimming. Their limbs have evolved into flippers, which also help with propulsion through the water.

Now that we know how big sea turtles can get, let’s take a look at their anatomy. All sea turtles have a hard shell that protects them from predators and the elements.[6]

Sea turtles also have a long neck, four flippers, and a tail. The neck and tail are both encased in the shell.

The flippers are used for swimming and steering. They are much larger on the front of the turtle than on the back.

All sea turtles have a pair of eyes on the sides of their head, as well as nostrils and flaps of skin that close when they dive underwater.

The mouth is located at the end of the turtle’s snout surrounded by a sharp beak, which they use to tear their food.

The loggerhead turtle has the largest head of all turtles. It is so large that the turtle was named for it.

The carapace is covered in scutes. Scutes are made of keratin, the same substance that makes up human fingernails and hair.

There are two types of scutes:

The number of scutes can vary from species to species and scientists use these to differentiate species. [7]

Leatherbacks are excluded from the above scute table, as their shell is unique. Instead of hard scutes, it is a thick and rubbery skin. It’s mostly cartilage raised in ridges. A layer of bones sits directly below the skin.

The plastron is the bottom part of the shell. It’s usually a lighter color than the carapace and is sometimes patterned.

The plastron is also attached to the carapace by scutes. In some species of turtle, the scutes on the plastron are fused together.

The neck of a sea turtle is long and flexible. Unlike land turtles, they cannot retract their head into the shell

All sea turtles have four flippers. The front flippers are larger than the back ones and are used for swimming and steering.

The scales on the flippers often have a different pattern than the ones on the shell. This can help scientists identify different species of turtle.

The tail is used for balance while swimming and steering. It’s also used to help sea turtles move on land. Males have larger tails than females as they house their reproductive organs which need to reach the female’s cloaca during mounting.

Sea turtles are huge creatures, reaching upwards of 2,000 pounds. The leatherback can grow to be 8 feet, while the average sea turtle is much smaller. They grow to be much larger than the average human, and they keep growing until they are 20-40 years old. They live long lives and have few predators, thanks in part to their large size.

Understanding the anatomy of sea turtles can also help their role in the ecosystem and the importance of protecting them.