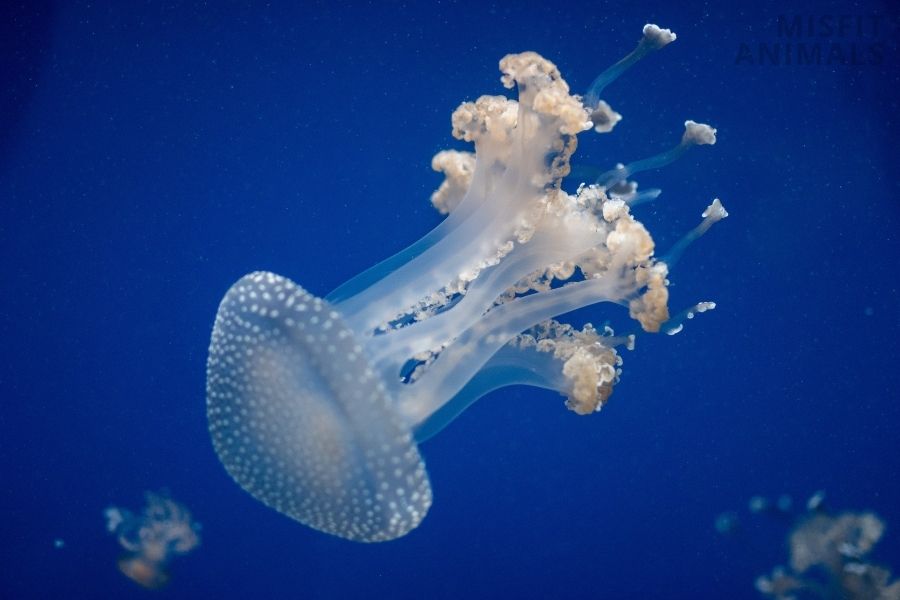 Yes, sea turtles eat jellyfish. Sea turtles are opportunistic feeders, which means they eat just about anything they can find. As long as they can catch it, they will eat it.

Sea turtles eat both plants and animals. They’re omnivores, getting their nutrition from both sources.

But what about jellyfish?

It may seem like a strange choice in meals, considering the ocean is full of life, so why jellyfish?

What nutritional value do they get from eating these creatures? How do they avoid getting stung by the jellyfish’s tentacles?

Yes, all species of sea turtle eat jellyfish. More predatory species like the Leatherback eat a lot of jellyfish, while herbivores like Green sea turtles eat them on occasion.

Since jellyfish are one of the most abundant creatures in the ocean, it’s not surprising that turtles often snack on them.

Jellyfish are a vital part of the ocean food chain. They eat plankton and small fish, and in turn, bigger creatures like turtles eat them. [1]

Their presence on the menu of sea turtles means their populations stay under control. All creatures in the ecosystem exist in a delicate balance; that’s why the threat of losing species, such as sea turtles, is so worrying.

Green sea turtles are the only species of sea turtle that is primarily herbivorous, meaning they mostly eat plants.

However, since they are opportunistic feeders, they also eat small creatures like jellyfish if they come across them. [2]

While their diet consists mainly of seagrasses and algae, eating the occasional jellyfish provides them with much-needed nutrients like protein and omega-3 fatty acids.

If opportunities arise, they also feast on small invertebrates, sponges, and fish carcasses.

Leatherback sea turtles are the largest turtle species and the most carnivorous. Their diet consists mainly of jellyfish and sea squirts, donning them the name “gelatinivores.” [3]

This species can grow to incredible sizes of up to 6 feet long and 2,000lbs. To sustain themselves, they must eat vast amounts of jellyfish. Lucky for them, they have a 100% success rate when “hunting” jellyfish. [4]

The simple jellyfish structures can do little to evade a giant sea turtle, so all leatherbacks must do is find them. This process is much more like foraging than hunting despite having animal prey.

What Else Eats Jellyfish?

Jellyfish are a favorite food of many animals, including

How Do Sea Turtles Eat Jellyfish Without Getting Stung?

Sea turtles are well-adapted to avoid the venomous sting from jellyfish while feeding on them. Their thick shells and keratin beaks create impenetrable barriers, and barb-like projections within their mouths protect their digestive tract.

These adaptations allow them to eat large numbers of jellyfish with little to no consequences.

The shells of sea turtles offer protection from predators and the elements, but they also prevent jellyfish stings.

Related: Can Sea Turtles Go In Their Shell?

In addition to their shells, sea turtles have hard beaks made of keratin. This horn-like material also forms human fingernails and hair.

This rigid material covers the turtle’s jaws and is used to tear apart prey. The keratin beak is also impervious to jellyfish stings.

The keratin beak of a sea turtle is powerful and can easily crush the soft bodies of jellyfish.

Barb-like projections line the mouth and esophagus of sea turtles.

These help to retain food items while expelling seawater, but it also protects the mouth from the sting of jellyfish.

When a jellyfish brushes up against a sea turtle’s mouth, the barbs within their mouths snag the tentacles and pull them free from the body. [5]

The sting cells still fire, but they can’t do any damage since they’re not attached to any nerves. They eventually detach from the turtle’s mouth and be swept away by the ocean current.

Jellyfish stings can also be dangerous to the eyes, so sea turtles have evolved a few ways to protect them.

While sea turtles are well-adapted to avoid getting stung by jellyfish, they are not immune to the venom.

It can be painful and even deadly if a turtle is stung by a particularly large or venomous jellyfish.

Why Do Sea Turtles Eat Jellyfish?

Jellyfish are a significant part of the sea turtle diet. They are rich in protein and essential fats, which help turtles grow and reproduce. They are also relatively easy to find and catch.

Jellyfish are an excellent source of

Protein is critical to the growth and repair of tissues. It is also necessary to produce hormones, enzymes, and other essential molecules in the body.

Essential fats aid the proper function of cell membranes, the insulation of nerve fibers, and the production of hormones.

Jellyfish are relatively easy for sea turtles to catch. They often congregate in large groups, or swarms, making them easy to find. [6]

They also don’t put up much of a fight. Their soft bodies and lack of muscular control make them easy prey for turtles.

Jellyfish are in all oceans, from the poles to the tropics. They are prevalent in coastal waters, where they often form swarms near the shore. [7]

This abundance makes them a reliable food source for turtles.

Do Sea Turtles Eat Jellyfish to Get High?

No, sea turtles do not eat jellyfish to get high.

Jellyfish contain a neurotoxin that can cause paralysis and even death in humans. However, this toxin does not affect sea turtles.

What Else Do Sea Turtles Eat?

Their diet varies depending on the species of turtle and the location.

Here is a complete list of the different types of sea turtles and their diets:

In conclusion, sea turtles do eat jellyfish. They are well-adapted to avoid getting stung by the venomous creatures, relying on them for food.

While different species of turtles eat different types of food, all turtles feast on jellyfish from time to time.