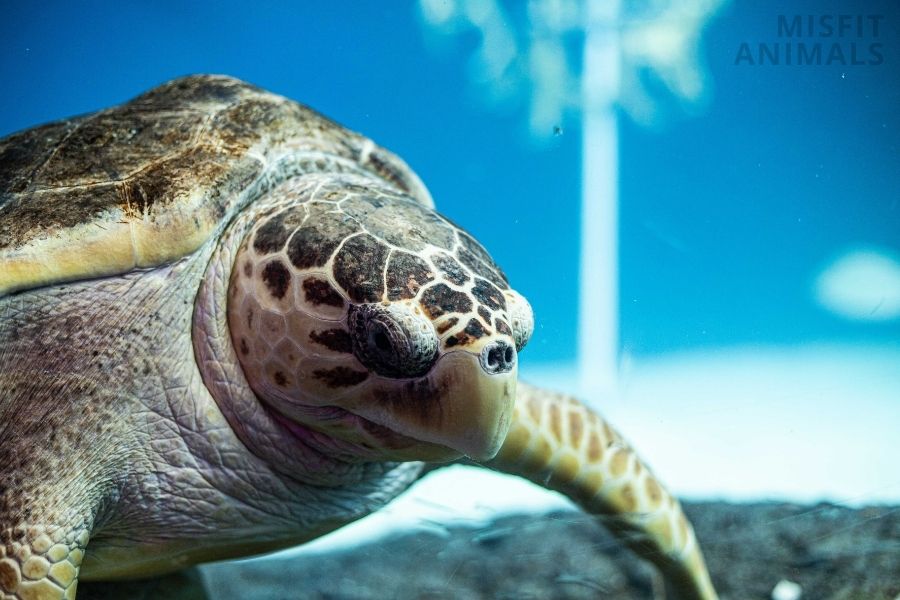 No, sea turtles cannot retract their head or limbs into their shell, as land turtles can. This makes them vulnerable to predation and becoming entangled in the trash that floats around in the oceans.

Sea turtles are some of the most majestic creatures in the ocean.

They have been around for over 100 million years and are found in almost all of the world’s oceans[1].

But how do they compare to their cousins, the land-based turtles, who are well-known for the unique adaptation of being able to tuck in their limbs and heads?

What physicalities limit sea turtles from this behavior? And if they can’t tuck themselves away into their shell, how do they protect themselves?

Can Sea Turtles Go In Their Shell?

Sea turtles are distinctly different from their land-based relatives.

One of the most notable differences is that sea turtles cannot retract their head or limbs into their shell.

Why Can’t Sea Turtles Hide in Their Shells?

Sea turtles cannot hide in their shells as there is no space for their head and flippers. This is due to their unique shells, which are suited to marine life.

Sea turtle shells are flatter and more streamlined than land-based turtles. This helps them swim faster and be more agile in the water, reducing drag.

They also have large flippers instead of feet, which are optimized to shift water and propel them efficiently through the ocean.

With large flippers and reduced shell size, there is no real estate left inside a sea turtle’s shell to accommodate its head and limbs. They have the same muscles that guide retraction, as they can pull their head inwards slightly but are met with resistance.[2]

Sea turtles have adapted to marine life and don’t have the same need to protect themselves from the harsh elements found on land. Land-based turtles live in a more hostile environment and need to be able to tuck away into their shell to avoid predators and the natural elements.

How Do Sea Turtles Protect Themselves From Predators?

Despite not being able to retract into their shell, sea turtles protect themselves from predators with their hard shells, fast and agile swimming maneuvers, and evasive driving.

Sea turtles’ hard shells provide some defense against predators, but their main line of defense is their speed and agility. They can quickly dive away from predators and escape to safety.

While they aren’t able to tuck into their shell, sea turtles have still evolved to be incredibly successful in the marine environment.

Hatchling sea turtles are vulnerable when they first emerge from their eggs. Only 1 in 1,000 hatchlings survive to experience adulthood.[3]

This is because they are easy prey for predators such as birds, crabs, and other animals.

Hatchlings have soft shells, aren’t very fast, and are very small. They don’t have the ability to protect themselves. Surviving until adulthood is a matter of pure luck. Sea turtle species lay a large number of eggs to accommodate for this high mortality rate.

As hatchlings grow into adults, their shells harden, and they become more challenging to catch and kill. While their hard shells are an essential part of their defense mechanisms, it is not impenetrable.

Hawksbill sea turtles are particularly vulnerable to being killed by humans for their shells.

As mentioned earlier, sea turtles have large flippers instead of feet. These flippers are adapted to help them swim quickly and with agility.

They can outswim most predators. When faced with a predator, they can move with an adept skill that their large predators cannot keep up with.

Observations also show that sea turtles turn their shells towards predators when nearby, protecting their more vulnerable heads and flippers.

Sea turtles have excellent eyesight and are very aware of their surroundings. This helps them spot predators before they attack.

They are also very good at evasive diving. When they see a predator coming, they can quickly dive away and escape to safety.

Their buoyancy allows them to resurface slowly. This way, they can scan the environment above them to ensure there are no predators nearby.

Related: How Long Can Sea Turtles Hold Their Breath?

Large sea turtles have few natural predators. Their main predators in the ocean are killer whales and large sharks. Human influences are the primary cause of many sea turtles’ demise.

Killer whales are the main predator of adult sea turtles. These whales attack turtles from below, flipping them over so they can’t swim away. Once the turtle is flipped, the whale tears it apart with their sharp teeth.[5]

Hatchling sea turtles are vulnerable to many more predators than adults. The following animals prey on sea turtle hatchlings:

As mentioned earlier, humans are the leading cause of death for many sea turtle populations. We hunt them for their shells, meat, and eggs, and we also accidentally catch them in fishing nets and leave them to die.

Not only do we hunt them for their shells, but we also pollute their habitats with trash. This trash ends up in the ocean where sea turtles live. They often mistake the trash for food and eat it, killing them.

Which Turtles Can Hide in Their Shells?

Pleurodires pull their heads and neck into their shell sideways. These turtles are known as side-neck turtles, the literal translation of pleurodires. This group evolved first.

The other, more common, type is the cryptodires, which pull their head and limbs straight back into the shell. The name comes from the Greek language and means “hidden neck”.

The Benefits of Head and Limb Retraction

Turtles have a hard shell that protects them from most predators. Some animals can still attack them. When they feel threatened, they retract their head and limbs into their shell to make it harder for predators to get to them.

This action also protects their softer underside from being harmed.

Some turtles seal the opening of their shell with their tails to further prevent predators from getting to them.

While defense may seem like the obvious benefit, scientists think this adaptation first evolved for a different reason[6]. Modern-day turtles, the Matamata, and North American snapping turtles use their retraction abilities to hunt. It allows them to propel their head forward at speed and increase their hunting success rate.

The reason scientists think this is the original evolution driver is that an ancient turtle (P. oberndorferi) displayed such a tactic.

This species could only partially retract its head, meaning it served little purpose for protection and must have been for hunting.[7]