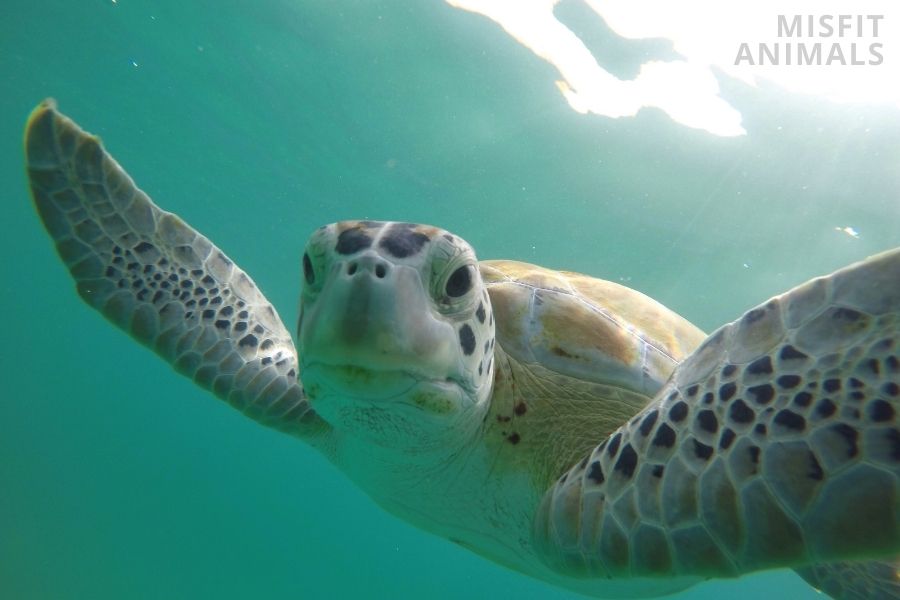 While sea turtles can bite, they typically don’t bite humans. They’re rarely aggressive towards people, but defend themselves if they’re threatened. Sea turtles have incredibly powerful jaws and can cause damage.

Sea turtles are some of the most majestic creatures on earth. They’re also one of the most endangered. With their populations dwindling, it’s more important than ever to learn everything we can about these amazing animals.

The inside of a sea turtle’s mouth looks like something out of a horror movie. The entire mouth is lined with barbs, which look like instruments for biting.

In reality, the use of these is a fascinating adaptation, and sea turtles are not known for biting unless they feel threatened.

Yes, sea turtles can bite. Their beak is sharp, and they have powerful jaws, so their bite can be quite painful. They have a bite force of up to 500 PSI, which is 3 times more than humans.

If you are ever unlucky enough to be bitten by a sea turtle, wash the wound thoroughly with soap and water to prevent infection.

Sea turtles mostly use their sharp beak to feed on aquatic plants such as seagrass and algae. Some species, like the loggerhead, use it to crunch on crabs and shellfish. [1]

It is rare for a sea turtle to bite a human. If it does happen, it is usually because the turtle feels threatened. For example, if you try to pick up a sea turtle, it may bite you in self-defense.

Most sea turtle bites occur when people accidentally step on them while they are swimming. The turtles can also mistake your fingers for food, or they may simply be trying to defend themselves.

If a sea turtle bites you, make sure to wash the wound thoroughly with soap and water to prevent infection. You should also see a doctor as soon as possible, as their bites can become infected.

Do Sea Turtles Have Teeth?

No, sea turtles do not have teeth. They have a sharp beak that they use to bite their food. Inside their mouth, they have barb projections used for filtering seawater while eating.

Sea turtles do not have teeth as we do. To eat, they have a specialized beak. The beak is made of keratin, much like a bird’s beak, except significantly different in shape.[2]

The keratin forms in a thin layer, called rhamphotheca, over the jawbones. This strong beak is for ripping, tearing, crushing, and scraping.

The inside of a sea turtle’s mouth is lined with backward-facing cartilaginous barbs which extend down the esophagus. These barbs are used to filter feed.[3]

Sea turtles swallow large amounts of seawater while eating, which they regurgitate. As they expel seawater, the barbs make sure no food leaves the throat and mouth. These adaptations help sea turtle digestion and are also why plastic bags are such a threat to turtle populations.

Sea turtles often accidentally consume plastic in the ocean, mistaking them for food. The plastic gets caught in the barbs, and the turtle struggles to regurgitate it.[4]

Even without teeth, a sea turtle can still deliver a strong bite with its powerful jaws and sharp beaks.

No, sea turtles are not aggressive creatures. They are shy and gentle animals that usually only bite if they feel threatened.

Sea turtles are solitary omnivores. They spend their days cruising the ocean, searching for food. They rarely interact with other animals, except for breeding purposes.

These natural behaviors mean they are gentle creatures and rarely show aggression. If they encounter humans, they usually keep their distance but may inspect them out of curiosity.

Sea turtles are not dangerous or aggressive animals. But even though they are not aggressive, you should still be careful around them. Sea turtles can carry bacteria and diseases that can be harmful to humans.

If you are bitten by a sea turtle, make sure to wash the wound thoroughly. You should also see a doctor as soon as possible, as their bites can sometimes become infected.

Avoid touching or handling sea turtles. If you must, make sure to wash your hands thoroughly afterward. It is also essential to respect their space and not disturb them while they are nesting or basking on the beach.

Is It OK to Touch a Sea Turtle?

Do not touch a sea turtle. These animals are protected by law, and it is illegal to harass or harm them in any way. If you see a sea turtle in the wild, do not approach it or try to pick it up.

It’s tempting to touch a sea turtle when you see one in the wild, but it’s important to resist the urge. Sea turtles are protected by law in many countries, and touching them can seriously harm their health.

Sea turtles stressed by human contact, and even something as simple as touching them can cause serious health problems.

If you are ever lucky enough to swim with a sea turtle, enjoy the experience from a distance and do not try to touch or pick them up.

Respect these amazing creatures and their habitat so that we can continue to learn about and protect them for generations to come.

Why Can’t You Pick up Baby Sea Turtles?

You might see a baby sea turtle that has just hatched and is making its way to the water. It’s tempting to want to help, but it’s important to resist the urge.

There are a few reasons why you should leave a baby sea turtle alone if you are fortunate enough to find one.

If you pick up a baby sea turtle on the beach, you might think you’re helping, but you could be dooming it. If the turtle is picked up and moved, it may die.

The baby sea turtle’s journey to the water is fraught with danger. Every creature in the ocean wants to eat them, so they must be quick.

If you find a baby sea turtle, the best thing you can do is keep away any predators and give it a clear path to the water. Then sit back and watch nature take its course.

If you see an adult sea turtle on the sea, she may be there to lay her eggs. You must give her space to not scare her back to the sea.

Sea turtles are shy creatures, and your presence could inhibit them from coming onto the beach to nest. If she cannot deposit her eggs, she risks health issues such as becoming egg-bound.

If you find a baby turtle on the beach, it has likely hatched recently and is heading to the water. Give the turtle its space and keep predators away from it on its journey.

Here are some more tips, if you are lucky enough to encounter a wild sea turtle:

Sea turtles are gentle creatures that rarely bite humans. If they do, it is usually because they feel threatened. Most bites occur when people accidentally step on them while they are swimming. If you are bitten by a sea turtle, make sure to wash the wound thoroughly with soap and water to prevent infection.