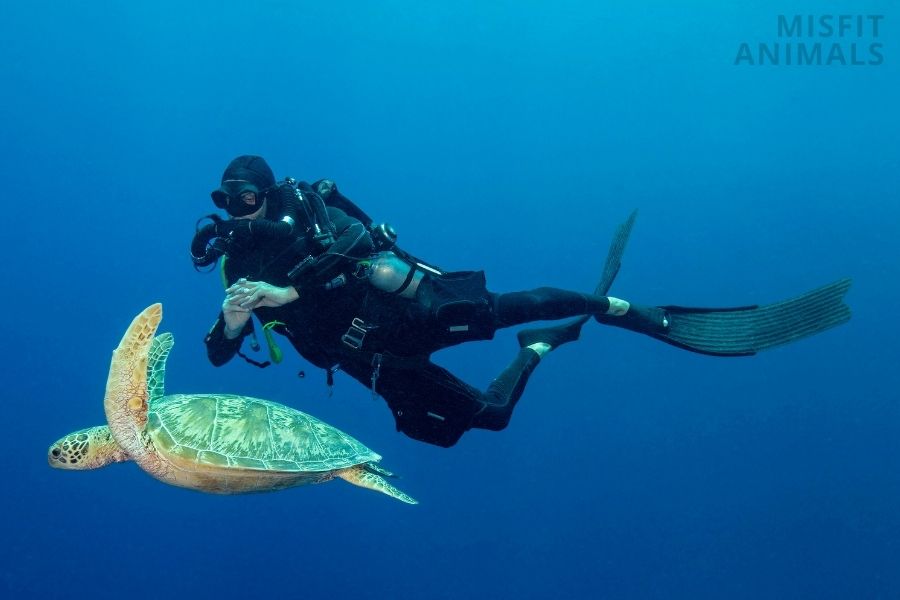 You can not keep a pet sea turtle. It is illegal in the US, as it’s an endangered species. They also make bad pets, largely due to their natural behavior and needs, such as migration, water requirements, and the fact that they are very long-lived.

Sea turtles have been around for more than 100 million years, but they’re now under direct threat from human influence and are massively endangered.

Many small, fresh-water turtle species are kept as pets, but keeping a sea turtle as a pet is an impossible and unethical task.

Can You Have a Sea Turtle as a Pet?

The simple answer is no. It is impossible to keep a sea turtle as a pet. There are many reasons for this, but the primary reason is that they are an endangered species.

As of 2016, all seven species of sea turtles are either endangered or critically endangered, as classified by the International Union for Conservation of Nature (IUCN). This means that they are at a very high risk of extinction in the wild.

Is It Legal to Own a Sea Turtle?

Because they are endangered, it is illegal to own a sea turtle in the United States[1]. The only way to have one is to adopt one through a Symbolic Adoption Program like the ones offered by the National Wildlife Federation or the Sea Turtle Conservancy.[2] [3]

These programs allow you to “adopt” a turtle for a small fee. The money goes towards turtle conservation efforts. You don’t get to take the turtle home with you, but you do get a certificate of adoption and other turtle-themed goodies.

The reasons why sea turtles are not suited as pets are endless, but here are the primary reasons:

There are seven different species of sea turtles, and all of them are either endangered or critically endangered. This means that there are very few turtles left in the wild, and their populations continue to decline.

The primary threat to sea turtles is humans. We hunt them for their meat, shell, and eggs. We destroy their habitats with coastal development and pollution. We accidentally catch them in fishing nets and on hooks meant for other fish.

These things add up to an uncertain future for these creatures.

Sea turtles need a lot of space. They can grow to be over six feet long and weigh more than 1000 pounds. That’s a lot of turtle to keep in your backyard pond.

Most sea turtles migrate long distances between their feeding and nesting grounds. This means that they would constantly be on the move, making it impossible to keep them as a pet.

Sea turtles need saltwater to live. This means you would need to have a huge tank or pool of seawater for your turtle to live in. And it would need to be filtered and changed regularly to keep the water clean.

While some species of turtles can live in freshwater, sea turtles cannot. They need the salt and other minerals found in seawater to stay healthy.

Sea turtles are not friendly creatures. They’re solitary animals that like to be left alone. In the wild, they only come together to mate.

They can also be quite aggressive. Males fight each other for the chance to mate with a female. Females bite and scratch if they feel threatened.

All turtles, including sea turtles, can carry a bacteria called Salmonella.[5]

This bacteria can cause an infection in humans if ingested. The infection can cause fever, diarrhea, and vomiting. It’s especially dangerous for young children, the elderly, and people with weakened immune systems.

Sea turtles can bite. And their bites can be dangerous. They have sharp beaks that they use to tear apart their food. Their bites can cause puncture wounds, infection, and even limb amputation.

Sea turtles are long-lived animals, with some species living for over 100 years[6]. This means that if you were to take on the responsibility of keeping a sea turtle as a pet, you would be responsible for its care for an incredibly long time.

This is because the sex of a turtle is determined by the temperature at which the egg is incubated, with warmer temperatures producing more females. This imbalance in the sex ratio could have serious consequences for the long-term viability of turtle populations.

Secondly, climate change increases the incidence of disease outbreaks amongst turtles. Warmer temperatures provide ideal conditions for bacteria to flourish, and turtles are particularly vulnerable to such infections.

Finally, turtle populations are also being impacted by more extreme weather events, such as hurricanes and floods. These events can damage critical nesting sites, making it difficult for turtles to reproduce successfully.

As coastal areas worldwide continues to develop, turtle nesting sites are lost and degraded. This has a serious impact on turtle populations, as it reduces the available places for turtles to lay their eggs.

The construction of coastal defenses such as seawalls and revetments also impacts turtles. These structures block turtles from accessing the beach or trap them when they are trying to return to the sea.

Turtles are often accidentally caught by fishermen, as they get tangled up in fishing nets and lines. This is known as ‘bycatch,’ and it’s a major problem for turtles.[8]

Vessel strike is another problem for turtles. This happens when a turtle is hit by a boat, which can cause serious injury or even death.

Turtles are polluted by the same chemicals that pollute the oceans as a whole. These include plastic pollution, oil spills, and toxic chemicals from agriculture and industry.

They ingest plastic debris that they mistake for food which causes blockages in their digestive tracts.

Turtles are hunted deliberately for their meat and shells. This illegal trade has a severe impact on turtle populations, as it removes adults from the population and prevents them from reproducing.

Sea turtles are most vulnerable to predation as eggs and hatchlings. Statistics say only about 1 in 1,000 to 10,000 hatchlings survive to adulthood.[9]

Animals such as raccoons, dogs, and pigs often raid their nests. Once they hatch, the tiny turtles are preyed upon by various predators, including birds, crabs, and fish.

As they grow older and larger, turtles become less vulnerable to predation. Large predators such as sharks can still attack them.

Can You Pet a Sea Turtle?

No, you cannot pet a sea turtle. Sea turtles are wild animals and they should be respected as such.

While it is tempting to try to touch or hold a turtle, it’s important to remember that they are not domesticated animals, and they can bite if they feel threatened.

In addition, sea turtles are protected by law in many countries, and it is illegal to harass or disturb them. If you see a sea turtle, the best thing to do is to leave it alone and watch it from a distance.

Can you keep a pet sea turtle? No, you cannot. Sea turtles are protected by law in many countries, and it is illegal to take them from the wild. Not only is it illegal, but it’s also harmful to the turtles. Turtles taken from the wild don’t survive for long in captivity, as they require specific conditions and care that are difficult to provide.

If you’re interested in helping turtles, there are many things you can do, such as supporting conservation efforts or volunteering at a turtle rescue center.

You can also help turtles by reducing your impact on the environment. This includes things like not using plastic straws and disposing of trash properly.

Which Turtle Makes the Best Pet?

There is no such thing as a “best” pet turtle. All turtles require specialized care and should only be kept by experienced reptile owners. Some common pets for beginners include red-eared sliders and painted turtles.

Can You Buy a Sea Turtle?

Can You Keep a Sea Turtle as a Pet?

No, you cannot keep a sea turtle as a pet. Sea turtles are wild animals and should be left in the wild. It is illegal to take them from the wild or to buy or sell them.