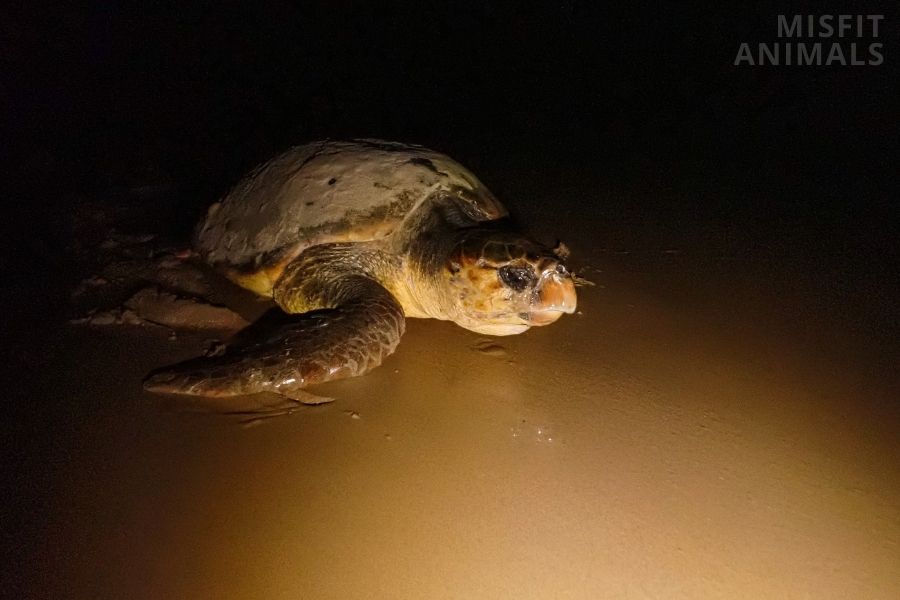 While sea turtles are generally diurnal, they come to shore to lay eggs at night. This is due to the lower risk of predation, and the general lower activity levels at night. Select sea turtles only lay eggs during the daytime.

Sea turtles are reptiles that are in coastal waters worldwide. There are seven different species of sea turtles, and they vary in size in their life, from just a few inches to nearly 400 pounds.

They spend most of their lives in the water, but they come ashore to lay eggs.

Sea turtles typically lay eggs at night, although there are some exceptions. Some species of sea turtles only lay eggs during the day.

The time of year when sea turtles lay eggs also differs by species. Some turtles nest all year long, while others only nest during certain months.

What Time of Night Do Sea Turtles Lay Eggs?

Most sea turtles lay their eggs between 11 PM and dawn. This time offers the most protection from predators and human activity.

The reason[1] for this is twofold:

Do Sea Turtles Only Lay Eggs at Night?

No, sea turtles don’t just lay eggs at night. Some species lay their eggs during the day.

The Kemp’s Ridley species lays their eggs more often in the day than the night, while the Hawksbill and Flatback lay either during the night or the day.[2]

When Do Sea Turtles Come to Shore?

Sea turtles come ashore at night. This is done to protect themselves and their eggs from predators. They also avoid the heat of the day by nesting at night.

Sea turtles only come to shore to lay their eggs. They return to the ocean immediately after nesting.

Since they are a marine species, they are clumsy and slow on land. They don’t spend time on land for other activities than nesting. Staying on land too long would also dry out their skin.

What Time of Year Do Sea Turtles Lay Eggs?

Most sea turtles lay eggs several times throughout the year, though it differs depending on the species. Some turtles, such as the Green sea turtle, nest all year round. Others, like the Flatback sea turtle, only nest during certain months.[3]

Do Turtles Nest at High Tide or Low Tide?

Turtles usually nest at high tide. This way they ensure their nests are above the high tide line and won’t get washed away. It also means they have less distance to travel from the ocean to their nesting site and can save their energy for nesting building, which can take all night.

The lunar and tide cycles affect sea turtles’ nesting, and many come ashore when high tide is around midnight instead of closer to dawn.

This means they have sufficient time to nest after the high tide has been and before the sun rises.

Sea turtles are mainly diurnal and are most active through the day, spending the night resting on the surface of crevices of rocks. While their egg-laying typically takes place during the night, all other activities are carried out during the day.

There is some flexibility around their activity, though. It is not uncommon for sea turtles to rest for periods in the day when situated in shallow reefs, as the sun’s heat can tire them.[4]

Female sea turtles are also active at night as they come ashore to lay their eggs under cover of darkness.

Can Sea Turtles See at Night?

Sea turtles have good vision both in and out of the water. They can see colors, and their eyes are specially adapted to help them see at night.[5]

This is helpful for them as they navigate the shoreline during nesting.

When Are Sea Turtles Active?

Sea turtles are mainly active during the day. This is when they hunt and forage for food. This is also when they migrate and take care of other necessary activities.

Sea turtles forage during the day. They use their keen eyesight to spot prey from a distance and then quickly swim after it.

After eating, they spend the rest of the day basking in the sun at the water’s surface or resting in crevices of rocks.

Do Sea Turtles Hunt At Night?

No, sea turtles do not hunt at night. They are mainly diurnal creatures and hunt and forage during the day.

No, sea turtles do not hibernate. They are tropical and sub-tropical species, and they migrate throughout the year. When the sea temperatures change, they migrate to warmer areas.

They can go into brumation, a reptilian form of hibernation when exposed to cold temperatures. They are ectotherms and rely on external heat to power their metabolism.[6]

If they experience a sudden drop in temperatures, they can slow their bodily processes down to save energy.

Some of the best places to see sea turtles are in Florida, Hawaii, and Mexico. These states have beautiful beaches and are home to many sea turtle nesting sites.

If you want to see sea turtles in their natural habitat, it’s best to go on a turtle tour. These are led by experts who know where to find the turtles and how to protect them.

Related: Can You Keep a Pet Sea Turtle or Is It Illegal?

Sea turtles reproduce sexually. The male and female turtles mate and the females lay eggs. The eggs hatch and the baby sea turtles enter the ocean.

Males and females come together during the breeding season. The males compete for the chance to mate with the female.

The courtship ritual involves the male turtle nipping at the flippers of the female. If the female turtle allows the male to mate with her, he mounts her. Mating can take hours and be quite dangerous.

The female bears the full weight of the male but must resurface so they can both get oxygen. Both the male and the female risk drowning during copulation.

The female mates with multiple males, storing the sperm for months. When she is ready, she makes her way to the beach. This is usually done at night to avoid predators and the heat of the sun.

Once she reaches the shore, she starts to dig a hole in which to lay her eggs.

She uses her back legs to scoop out sand and create a nest. She lays her eggs inside and then covers them up with sand.

The eggs incubate in the sand for about 60 days. When the time comes, the baby turtles start to hatch from their eggs. They use their egg tooth to break through the shell.

Once they are out of the egg, they make their way to the ocean. It is a dangerous journey, as they are vulnerable to predators. Only a few of the babies survive to adulthood.

Sea turtles lay eggs during the night, typically between 11 PM and dawn. They do so to avoid other animals and humans. Other than nesting, all sea turtle activity usually takes place during the day, as they are diurnal animals.