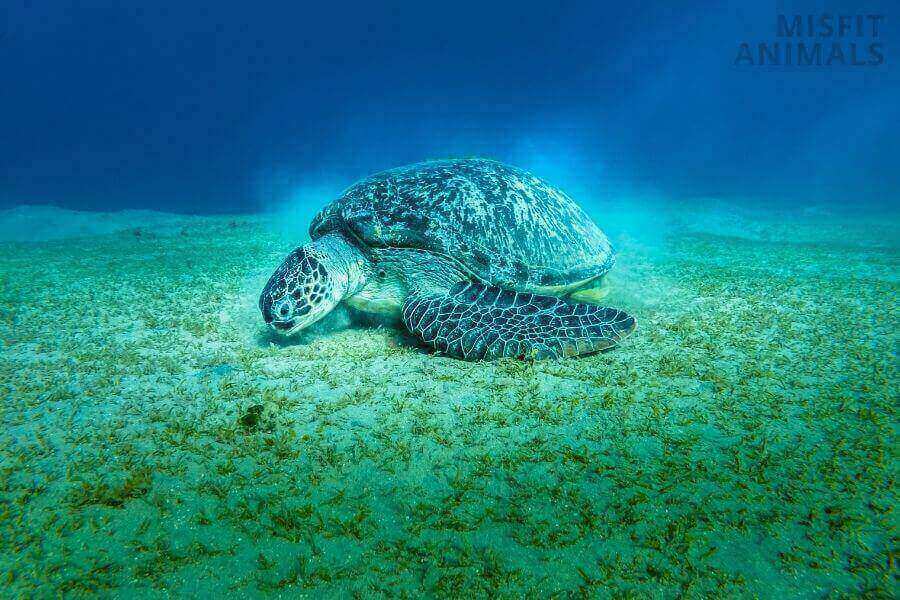 Sea turtles can sleep underwater using a special mechanism called the “diving response”. When a turtle is asleep in the water, its heart rate and breathing slow down dramatically. This allows the turtle to stay underwater for long periods without needing to surface for air.

These unique animals have been around for millions of years, and they continue to amaze us with their strange and mysterious habits.

One of the most curious things about sea turtles is how they sleep. These creatures are almost exclusively marine-dwelling but need to breathe oxygen from the air.

So, how do these creatures manage to sleep underwater without drowning?

How Do Sea Turtles Sleep?

Sea turtles sleep underwater, either deep in a reef or near the surface. They need to periodically surface for air while sleeping but do so only every few hours.

Many divers have seen green turtles sleeping under ledges in reefs and rocks.

Hatchlings sleep while floating on the water’s surface with their front flippers folded back over the top of their backs. [1]

This suggests that sea turtles can sleep in a variety of positions and locations. Further research is needed to understand how these animals can adapt their sleep habits to their changing environment.

Yes, sea turtles do sleep. Like most animals, they need to rest and recover. They are diurnal, so they sleep during the night.

They usually do this by finding a safe place to float on the surface or by resting on the seafloor.

It is still unknown how much sleep sea turtles need or what specific functions sleep serves for them, but it is clear that they require some sleep to rest and restore their energy.

In general, sleep is important for:

Without sufficient sleep, animals become tired and are less able to function properly. This is true for both marine and terrestrial animals, including humans.

Sleep likely plays a vital role in the health and well-being of sea turtles, just as it does for other animals.

In addition to regular sleep, sea turtles can enter a state of dormancy called brumation. Brumation is similar to hibernation in that the animal’s heart rate and metabolism slow down significantly.

It typically occurs when sea turtles experience cool temperatures. Ectotherms need a warm environment to function, so brumating in cold environments helps them save energy.

Sea turtles do not regularly brumate like many freshwater- or terrestrial turtle species. Instead, they migrate to stay in warm waters.

Where Do Sea Turtles Sleep?

Sea turtles sleep where it is safe and where they feel comfortable. This can be on the seafloor, in a reef, or even at the water’s surface.

Sea turtles are known to sleep in groups, but usually not in large numbers[2]. It is not entirely clear why sea turtles sleep in groups since they are usually solitary, but it might provide them with some safety.

The nearby environment determines where a sea turtle sleeps. If near the coast, they sleep in moderate deep reefs. They rarely sleep on the water’s surface, as this positioning makes them vulnerable to predation.

They are more likely to sleep on the surface of the water if they are in the open ocean, as it is a long dive to the ocean floor, and they need to be able to come up for air. [3]

Sea turtles are known to return to the same sleeping site repeatedly.[4]

How Do Sea Turtles Sleep Underwater?

Sea turtles sleep underwater by finding a safe place to rest in moderately shallow waters. They lower their metabolic rate and surface every few hours for oxygen.

To increase the time they spend underwater during rest, sea turtles have some unique adaptations that allow them to maximize respiration efficiency:

All of these adaptations help sea turtles stay submerged for long periods, sometimes up to seven to ten hours at a time.[6]

Although they can sleep for long periods underwater, sea turtles do not enter a deep sleep state. Instead, they remain in a light sleep from which they can easily arouse if necessary.

Related: How Long Can Sea Turtles Hold Their Breath?

How Long Do Sea Turtles Sleep?

Sea turtles rest for approximately 11hrs per day. This is split through the night, and short rests during the day.

There is no definitive answer to how long sea turtles sleep during the night. Sea turtles, like all animals, need sleep to function properly.

Sea turtles likely sleep for shorter periods than terrestrial animals since they must surface every few hours to breathe.

They change sleep habits depending on the daylight present. In shallower waters, more light is present, and the turtle sleeps less or in short bursts. For deeper sleep, they tend to move to deeper areas of reefs or the ocean.

The exception to these observations is during migrations. Studies show turtles don’t rest during migration, which may last for days. Instead, they keep moving, taking short and frequent dives in the daytime and deeper dives at night.[7]

What Do Sea Turtles Do During the Day?

Sea turtles are most active during the day. This is when they forage for food and mate. They often sleep in short bursts during the daytime if there is enough light.

A typical day for a marine turtle includes:

During the day, sea turtles often bask in the sun to raise their body temperature. This is important as they are ectotherms and rely on external heat sources.[7]

They only come to land to lay eggs in the sand once per year; the rest of their time is spent exclusively in the ocean.

Only females come to shore. Males spend the entirety of their life in the ocean (except for the short movement between nest and water when they hatch).

Because of this, estimating populations is challenging. All sea turtle populations are estimated with data sourced from breeding females.

Sea turtles have many adaptations that help them live and sleep in their ocean environment. Despite being reptiles, they can spend long periods underwater due to their large lungs, high hemoglobin levels, and low metabolic rates.

They mostly sleep during the night but can take short naps during the day. Their sleep patterns change depending on the amount of daylight and their location.

Yes, sea turtles sleep underwater. They must come up to the surface to breathe air every few hours.

Do Sea Turtles Sleep on the Beach?

No, sea turtles do not sleep on the beach. They spend most of their time in the ocean and only come to shore to lay eggs.