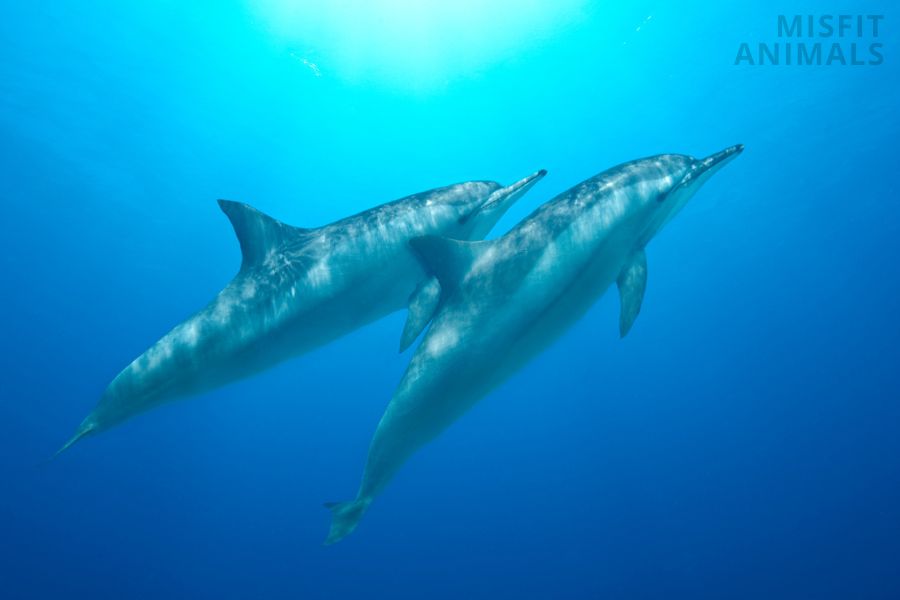 Hawaii is one of the most ecologically diverse states in the United States. Animals in Hawaii include bats, deer, wallabies, seals, whales, various fishes, and more.

Hawaii is the only American state located in the tropics. It is an archipelago sitting atop volcanoes and featuring a tropical climate.

Tourism is the biggest industry in this state, and people from around the world visit Hawaii every year thanks to its beauty.

Despite its small size, the state of Hawaii is one of the most ecologically diverse places in the United States. There are over 21,000 animal species in the Hawaiian rainforests, oceans, and adjoining areas.

This article lists the top 23 animals found in Hawaii to give you an idea of what to expect on your next trip to the islands.

The Hawaiian goose, also known as the Nene, is the state bird of Hawaii. They are found in the islands of Maui, Hawai’i, Kaua’i, Molokai, and Oahu.

These birds are believed to have evolved from the Canadian goose millennia ago.[1]

The Nene is about 20 to 26 inches in length and herbivorous. They have black heads and buffed cheeks. These goose species feed on seeds, leaves, fruits, and flowers.

Nenes live in shrublands, grasslands, lava plains, and coastal dunes. Their breeding period is from April to August.

The Humuhumunukunukuapuaʻa, the Hawaiian triggerfish (or the reef triggerfish) is the state fish of Hawaii. They are commonly found in the Indian and Pacific oceans, with a large presence around the coast of Hawaii.

Reef triggerfishes have colorful bodies with black diagonal lines. They are aggressive and have been reported to bite swimmers.

The average Hawaiian triggerfish grows to a length of 12 inches.

The Hawaiian monk seal is the state mammal of Hawaii. They are called the llio-holo-i-ka-uaua in the native language. They are large seals reaching a length of around seven feet and weighing around 450 lbs.

Hawaiian monk seals are classified as endangered by the IUCN, with less than 1,570 individuals remaining.[2]

Humpback whales are found in oceans around the world. They are recognized as the state aquatic mammals of Hawaii.

Humpback whales are a common sighting in the waters of Hawaii mainly due to their location.

They have a high cultural significance and are featured in several Hawaiian emblems, including the dollar.

The brush-tailed rock wallaby is the only marsupial species in Hawaii. They were introduced in the early twentieth century and had a small population in the state.

Brush-tailed rock wallabies get their name from their bushy tails, which is their defining physical trait. They are found in the Kalihi valley of Oahu Island.

Hawaiian hoary bats are native to Hawaii and get their name from their white tips and fur coats. Their entire body is covered with fur except for their inside wings. They are found in Hawai’i Island and the Kauai Islands.

Hawaiian hoary bats are brown in color and have wingspans ranging up to 13.5 inches. They use echolocation for hunting for insects and are nocturnal.

Hawaiian hoary bats live in isolation and are sexually dimorphic with the females being slightly bigger than males.

As the name suggests, the Indian grey mongoose is native to the Indian subcontinent and Western Asia. You can also find them in the Hawaiian islands.

Indian grey mongooses were introduced into the state to control the rodent population but are now considered pests.[3]

It is not allowed to bring or mate these mongooses without permission in Hawaii.

The chitals or the axis deer are red-brown colored medium-sized deer native to the Indian subcontinent. They can reach a height of 35 inches at the shoulder and weigh up to 165 lbs.

Chitals were introduced to the islands Molokai, Lanai, and Maui in the 1860s. They have no natural predators in the state, resulting in a population growth rate that is unsustainable for the Hawaiian Islands.

The Laysan albatross is one of the seabirds found in Hawaii. They are large birds and have a wingspan of 80 inches.

Laysan albatrosses live for around 60 years and can be seen on the islands of Kauai and Oahu.

They are the second most common bird species found in Hawaii.

The Japanese white-eye is a small bird native to Japan. They were introduced in the Hawaiian Islands in 1929. They get their name from their eyes which have white rings.

Japanese white-eyes feed on nectar, fruits, and insects. They fly in flocks and are a common sight in Oahu.

The red-crested cardinal, also known as the Brazilian cardinal, was introduced in Hawaii in the 1930s.

They are native to South America but can be found in several Hawaiian urban areas except for the Big Island.

Rose-ringed parakeets are native to Africa and the Indian subcontinent. They are also found in Hawaii and live in groups in palm trees.

They are one of the few parakeet species to adapt to urbanization and deforestation.

Rose-ringed parakeets are not welcome in the Hawaiian Islands mainly due to them being extremely loud.

The Hawaiian petrel is a pelagic bird native to Hawaii. They are considered endangered as their population is declining at a rapid pace.

Their nests are threatened by feral cats and other predators. Efforts are being made to conserve these bird species.

White-rumped shamas were introduced in Hawaii from Malaysia in 1931.

They are medium-sized songbirds with dark-brown feathers on their backs and heads. Their face and underbelly are white, which gives the bird its name.

There are several dolphin species found in the oceans surrounding Hawaii. One of the most common dolphins in Hawaii is the spinner dolphin.

These mammals love playing and spinning around in the water, giving them their name.

Spinner dolphins are friendly to tourists and can easily be spotted in Kealakekua Bay and Makako Bay.

Manta rays are found in temperate and tropical oceans of the world. They have a wingspan of up to 20 feet and are routinely spotted on the Kona Coast.

Unlike stingrays or eagle rays, manta rays do not have a stinger making it easier for you to get closer to them without being stung.

The most dangerous animal found in the waters of Hawaii is the box jellyfish. They are also called sea wasps or marine stingers due to their venom.

Box jellyfishes have long tentacles covered with stingers which they use to hunt for fish and shrimps. Their venom is fatal to humans, which is why they must be avoided.

If you are stung by a box jellyfish, the toxins will shut down your heart and can even cause failure. The toxin also leaves behind excruciating pain, which lasts for weeks.

Lifeguards usually stop people from going swimming if a box jellyfish is spotted.

This sea urchin covered in large black spines is dangerous. The long-spined sea urchins are venomous and hide among corals. They also attach themselves to rocks and other surfaces.

Their venom is not fatal to humans but can cause a lot of pain. If a spine is lodged into your skin, you can try to remove it, but it is more likely to dissolve as soon as it enters your skin.

One of the most innocuous creatures found in Hawaii is the cone snail. Cone snails, cones, or cone shells are venomous gastropod mollusks found in warm, tropical areas of the world.

There are around 34 different cone snails in Hawaii.

They hunt their prey using their venom, which is usually not fatal to humans but can cause serious issues if left unchecked.

Cone snails use their hypodermic radula, which is shaped like a needle, to attack their prey. The venom paralyzes it, making it easy for the cone snails to engulf it.

Sharks are found everywhere in the oceans. Tiger sharks are one of the most famous shark breeds in the world.

They are famous for their striped torso, which resembles a tiger’s skin. They have excellent eyesight and exceptional smelling abilities.

Unlike most other sharks, tiger sharks attack humans. They can be lethal, which is why you should not go swimming if they are around. They are commonly found in the Pacific Ocean.

Great white sharks are one of the largest shark breeds in the world. They are responsible for the most unprovoked shark attacks on humans in the world.

Great white sharks are found everywhere in the world but remain close to the warmer waters between the tropics. Their knife-like teeth and excellent smelling sense makes them deadly predator.

They are frequently spotted near the Hawaiian Islands but are fewer than tiger sharks in the area.

Eels are famous around the world for their slippery bodies. Moray eels are one of the most dangerous marine animals found in the Pacific Ocean.

They hide among rocks and only come out to find their prey. They have sharp teeth and bulging eyes giving them their frightening look.

Oahu tree snails are a species of gastropod mollusks that are also called Kahului in the Hawaiian language. They are endemic to the island of Oahu, and their shells are used as ornaments.

They have spiral shell coiling giving them and are classified as critically endangered by the IUCN.

Oahu tree snails live in damp and wet rainforests and are herbivores. They eat plants, fruits, and vegetables.

The hawksbill sea turtle can be found in the oceans surrounding Hawaii. They live in mangrove swamps and coral reefs near the coasts. They feed on sea sponges and love moving a lot.

Hawksbill sea turtles are considered critically endangered due to their decreasing numbers. One of the major causes of this is environmental pollution. The state of Hawaii regularly works to conserve its biodiversity.

Hawaiian stilts are a subspecies of the black-necked stilts and are native to Hawaii. They are long-legged small shorebirds with elongated beaks. They inhabit both fresh and saltwater and are a common sight in lagoons, marshes, and estuaries.

Hawaiian stilts are classified as endangered due to their habitat loss and reduced population.

Hawaii is one of the most ecologically diverse places in the United States. There are several species of birds and mammals residing in the Hawaiian Islands. The oceans surrounding the state contain large marine life, including sharks, eels, and fishes.

It is a great site for bird watching or scuba diving. You can also find several exotic bird species, such as the rose-ringed parakeet and the Laysan albatross.

Are There Bears in Hawaii?

No, there are no bears in the state of Hawaii. The islands do not have any native bear species, nor have they been introduced to the state.

What Is the State Animal of Hawaii?

The Hawaiian monk seal is the state animal and mammal of Hawaii. They are large creatures found near the coastal areas of the islands, with females being larger than males.

Does Hawaii Have Monkeys?

No, Hawaii does not have monkeys. There are only two species of mammals found in the state – the Hawaiian hoary bat and the Hawaiian monk seal.

Does Hawaii Have Hippos?

No, Hawaii does not have hippos. They are native to Africa and are not found in Hawaii.