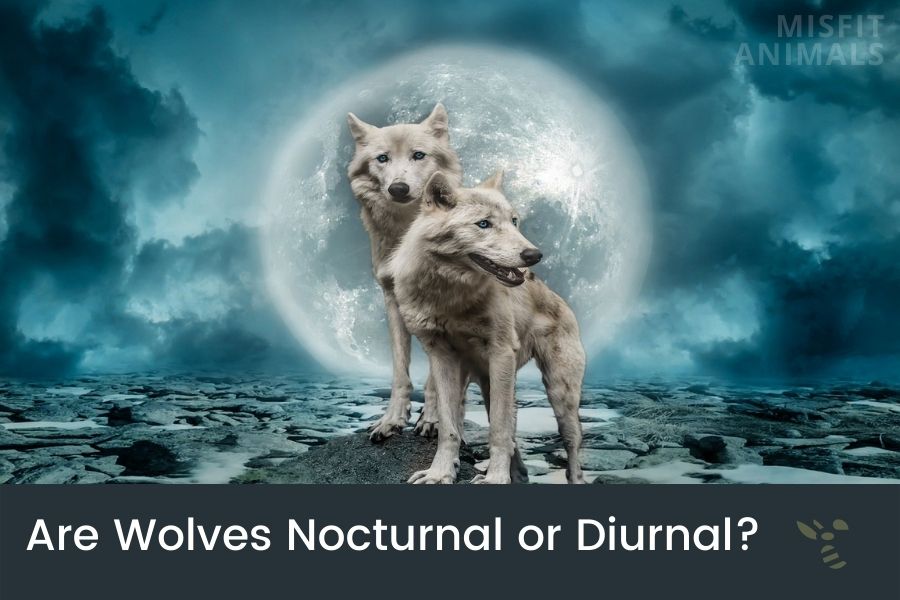 Wolves are nocturnal creatures, meaning they’re active at night. They hunt, mate, and take care of their main activities at night. Wolves sleep during the day.

This doesn’t mean they sleep all day, as wolves can be seen up and about during the day as well.

In this article, we’ll dive deeper into the nightly activities of wolves.

Yes, wolves are nocturnal, meaning they’re up at night and sleep most of the day. They are most active between dawn and dusk. At night, they have an easier time hunting, and with their great night vision, they have a great advantage over their prey.

Most wolves aren’t diurnal, but they can still be active during the day. Wolves are known to travel a lot, covering long distances. At times, they will do this during both night and day.

A more precise description of the daily activity pattern of wolves would be a mix of nocturnal and crepuscular.

Crepuscular is a term describing animals whose activity takes place during the twilight hours of dawn and dusk. They are typically more active around sunrise and sunset than at any other time of day.

Wolves are equipped with a tapetum lucidum, a reflective layer in their eye. This reflective layer enhances light during low-light situations, meaning their vision is great during dusk and dawn.

Why Are Wolves Nocturnal?

Wolves are typically nocturnal because there is less activity at night [1].

By being active during the night, wolves are able to avoid contact with people and other predators that are more actively hunting during the daytime hours.

Wolves have also learned to avoid humans. Since humans are diurnal, it makes sense for wolves to stay active at night, and hide away during the day.

Related: Do Wolves Have Night Vision?

What Do Wolves Do at Night?

During their nighttime hours, wolves will usually spend time hunting prey. Wolves will also defend their territory, mate, play, and rest during the night.

Do Wolves Hunt at Night?

Wolves hunt at night, as well as during dusk and dawn. While they can hunt during the day, they’re more successful at night. Wolves are great at adapting, and they will change their daily activity depending on when their prey is active.

Wolves use their sharpened sense to find their next meal. Wolves have a great sense of hearing, allowing them to quickly track down prey.

They’ve also developed a sharpened sense of smell, allowing them to both recognize prey or predators from far away.

The tapetum lucidum is also what makes wolves’ eyes glow at night.

Even without perfect vision though, wolves have such great hearing that they can pick up on any movement nearby which helps guide them towards an unsuspecting meal.

Do Wolves Travel at Night?

As wolves are nocturnal, they do travel mostly at night. Wolves have great stamina, meaning they can cover up to 60 miles in a single night.

They will often travel during the nighttime hours to find food for their pack, or to claim new territories.

Wolves travel at night, as they can be more secretive and hidden, than if they were to do so during the day. They want to avoid attracting other predators, as well as avoid their prey seeing them.

Wolves may travel as far as 500 miles while hunting. This far distance traveling takes place over several days and weeks. [3]

What Do Wolves do During the Day?

During the daytime, wolves tend to be very relaxed. They will spend their time resting and sleeping, though some wolves may stand guard, looking out for intruders.

It is not until dusk approaches do their energy pick up again.

As the sun begins to set, wolves are on high alert once again as it’s prime time for hunting. Wolves will not only be looking out for potential prey but also trying to evade other predators who may want a piece of them.

When Do Wolves Sleep?

Wolves sleep during the day and are active during the night. This is mostly due to the activity patterns of their prey, which have shifted towards dusk and nighttime activity [3].

If wolves are hunting for prey that is awake during the day, they’d most likely also change their activity pattern.

Related: How do wolves sleep?

How Long Do Wolves Sleep?

Wolves sleep between 4-10 hours a day, in order to metabolize the food they’ve eaten.

As wolves burn about 70% more calories compared to similar animals of their size, they need to sleep and eat more as well.

One study suggests that wolves sleep around 30% of time time, meaning 7-8 hours a day, on an average day. This is a little less than dogs, who sleep on average 10.5 hours a day.

Where Do Wolves Sleep?

Wolves like to sleep in enclosed spaces, such as holes in mountains, under rock formations, or other similar places. They’ll create these dens as they’re traveling, and may have multiple of them spread out across their territory.

This ensures, that they always have a place to sleep, even if they’re traveling.

If there are no enclosed spaces around, wolves can decide to sleep in the open instead.

Wolves aren’t the only nocturnal predators in the wild. Predators with similar activity patterns include:

The world of animals is full of nocturnal animals, who hunt when it’s dark. These animals usually have evolved some form of advantage at night, such as enhanced night vision.

Wolves are typically considered nocturnal or crepuscular animals. They’ll be active during dusk, dawn, and everywhere in between. During the day, they’ll spend their time sleeping and resting, until it’s nighttime again.

Since wolves are predators, they’ve developed their daily activity patterns due to the activity of their prey.

If their prey were to be active exclusively during the day, wolves may adapt to the circumstances, changing their schedule.

Wolves use their heightened senses (seeing, smelling, and hearing) to track down prey in the night.

Are Wolves Active During the Day?

No, most wolves aren’t active during the day. They spend this time sleeping and resting, saving up energy for the nighttime when they’ll go out to hunt.

What Times Are Wolves Awake?

Wolves are mainly awake from dusk until dawn, but may also be up at times during the day. Wolves spend approximately 8 hours sleeping every day, meaning they can’t solely be up at night.

Gray wolves are mainly nocturnal and will hunt for food at night. During the day, they’ll sleep, saving up energy. When dusk comes around, their activity levels increase, as they prepare to hunt.