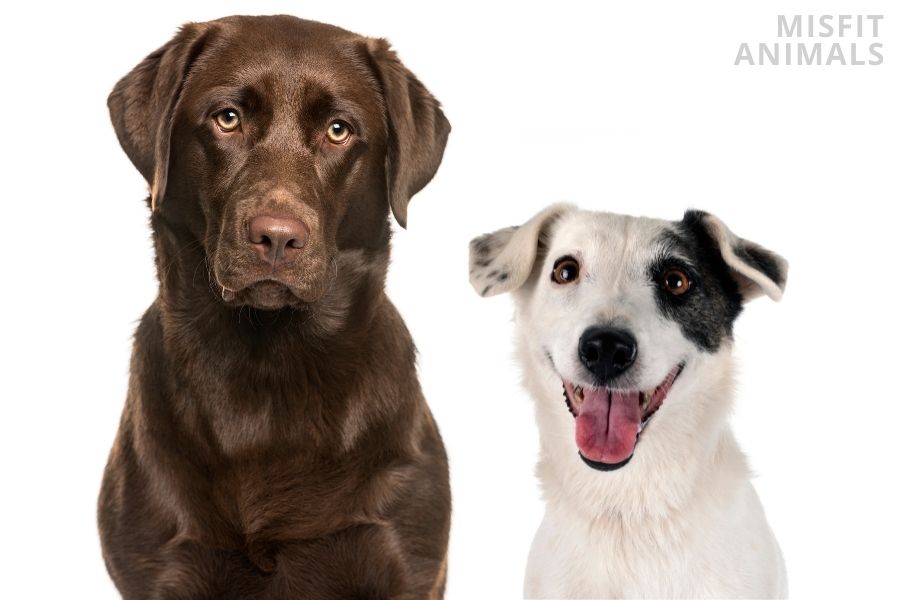 The Jack Russell Lab mix is a crossbreed of Jack Russell Terrier and Labrador Retrievers. Their size varies. They can be as small as Jack Russells or as tall as labradors. They are loving and playful.

Jackadors are generally healthy. They can develop a few diseases, but not as many as purebreds. They are intelligent and don’t require excessive grooming.

You will also learn why you should or shouldn’t buy this mixed breed.

Jack Russell Lab mixed dogs are short to medium-sized. They are a mix of brown, black, cream, or white. As they were originally bred for hunting, they are good trackers and companionship dogs.

Jackadors are affectionate dogs, but also full of energy. They need plenty of physical exercise. Sedentary people should avoid getting a Jackador.

They are not the best dogs around young children. If you socialize and train them from puppyhood, they can become great family dogs.

Jack Russell Lab mixes are not suited for apartment living. They can adapt to it if you take them for long walks and play dates.

The main Jack Russell Lab Mix characteristics are listed in the table below.

What Is a Lab Jack Russell Mix Called?

Jackador is a combination of Jack and Labrador. People often refer to Labrador Retrievers as Labs. A common conception is that the breed is called Lab. This is why ‘Jackador’ sounds unfamiliar to many.

3 Reasons To Get a Jack Russell Lab Mix

Lab Jack Russell mixes are healthy dogs with a long lifespan. Their average life expectancy is between 10 and 14 years. This mixed breed does not live as long as Jack Russells, who have the longest lifespan among pet dogs of 13 to 16 years.

Jack Russell Labrador mixes are joyful and friendly. They like to play with their owners. They also enjoy playing with their dog friends. If you are energetic and like to spend time with your dog, Jackadors are an excellent choice.

Lab Jack Russell mixed dogs are easy to train because of their instinctive intelligence. This means they perform well at the tasks they have been bred for. Both parent breeds have been bred for hunting. This gives them the ability to understand what humans want from them.

3 Reasons Not To Get a Jack Russell Lab Mix

Both Jack Russells and Labrador retrievers shed a lot. This is because they are double-coated and have short hair. Shedding is kept under control through proper grooming and diet. If you are looking for a dog that doesn’t shed, the Jackador is not for you.

Jackadors are not made to stay indoors all day and become couch potatoes. They are highly energetic and need opportunities to release their energy every day. They get frustrated if they don’t release their energy. This leads to unwanted behavior, such as excessive barking.

Jackadors are loud. They get this behavior from Jack Russels. They bark loud because they were bred for hunting. They had to bark loudly to be heard by the hunters.

If you live in a quiet neighborhood, the Jackador is not the best choice.

Related: Why Do Jack Russells Bark?

The origin of Jack Russell Lab mixes is unknown, but it is believed they were first bred in the United States. Some records date it back to the ‘70s. The breed is not recognized by the American Kennel Club.

Other canine organizations are thinking about recognizing this mixed breed. Due to a high number of requests, Jackadors may soon be accepted as a separate breed.

Jack Russells and Labradors have a history of hunting. They have multiple hereditary characteristics.

Understanding how the two breeds evolved is essential to getting to know your Jack Russell lab mix.

This resulted in high instinctive intelligence. It also contributed to some behavior characteristics seen in Jack Russells.

The American Kennel Club recognized Jack Russell Terriers as a separate breed in 1998. In 2003, they included them in the Parson Russell Terrier category.[1]

At the moment you will not find jack Russell terriers on the American Kennel Club’s official breeds list.

Labs originate from fishing dogs imported from Canada. These dogs came from a region called Labrador. This is where their name ‘Labrador Retriever’ comes from.

Fishing dogs from Canada were imported into Europe in 1830[2]. The first collaboration for developing an established breed began in 1880.

The UK Kennel Club recognized the breed in 1903. The American Kennel Club did the same in 1917.

Jack Russell Lab mixes are short to medium dogs. They have short coats of various colors, including white, black, brown, and cream. Jackadors measure between 16–20 inches tall and weigh between 25–50 pounds. They have stiff-floppy years.

It is impossible to predict what Jackador puppies look like. This is true for all mixed breeds. The parents pass on different genes that result in a wide variety of looks.

Jack Russel Lab mixes inherit the color of their labrador parent in most cases. This is easily explained by genetics.

Jack Russell terriers don’t have white as their base color. They are black, brown, or tan, with white spots. They have been bred to have larger white spots. This helped hunters distinguish them from their prey.

Labrador retrievers do not carry the gene that causes white spotting. This means the chances of having a white-spotted Jackador are low.

Jack Russells can have dark face masks. These masks are called melanistic masks. For a melanistic mask to be present, both parents need to pass on the gene. Labradors do not carry the gene. Jackadors will not display this feature.

Jack Russell Terrier Lab mixes are playful and agile. They are intelligent and easy to train. Jakadors make great guard dogs. They form a strong bond with their owners. These dogs are energetic and loving but can become aggressive if not trained and socialized early.

They are loud and engage in digging behavior due to their original purpose. Jack Russell and Labradors were bred for hunting and finding prey. They have a well-developed sense of smell.

In other words, it’s in their genes to dig.

Jackadors inherit various traits specific to their parent breeds, but it is hard to predict which genes they inherit. Some traits are common to both Labradors and Jakies. These shared genes are more likely to be passed on to offspring.

There is a preconception that chocolate-colored labs are more aggressive than yellow or black Labs. A study[5] from 2019 found no evidence of that.

Aggressive behavior in dogs is influenced by genes[6]. Jackadors are predisposed to aggression because of the genes inherited from Jack Russell Terriers. The predisposition is not as high as if both parents passed on the genes.

Do Jack Russell Lab Mix Dogs Have a Hunting Instinct?

Yes, Jack Russell Lab mixes have a highly developed hunting instinct. Both jack Russells and Labradors were bred for hunting. These experiences have modified the dogs’ brains to pass on the genes for hunting.

A study[7] conducted in 2019 concluded that the neuroanatomical structures of dogs’ brains are highly influenced by what they have been bred for. Jackadors inherit the hunting genes from both parents.

This means they have traits specific to hunting breeds:

Lab Jack Russell mixes are healthy dogs, but they are prone to common health issues, such as obesity. Jackadors are also predisposed to genetic issues, including congenital cataracts.

The study also showed that crossbreeds had a higher chance of being carriers of recessive disease genes than pure breeds.

Carriers are dogs with the genes for a disease. This does not necessarily mean that the disease manifests.

Jackadors are predisposed to recessive diseases common to Jack Russells and Labrador Retrievers because both parent breeds are carriers.

This suggests that the likelihood of Jackadors developing patellar luxation depends on which parent passes on the gene.

The recessive diseases Jack Russell Lab mixes are predisposed to are:

Jackadors are predisposed to several health issues that don’t need one gene from each parent.

This table illustrates other diseases that Jackadors are prone to.

Jack Russell Lab mixes require at least one hour of exercise per day. The ideal amount is one hour and a half.

Both jack Russells and Labradors were bred for hunting. Jackadors inherit their genes. This makes them highly active dogs.

If you are an inactive person, Jackadors are not the ideal choice.

Physical activity is essential for Jack Russell Lab mixes. They are highly energetic. They get frustrated if they don’t release their energy, leading to behavior issues.

These issues include destructive behavior, excessive barking, and separation anxiety.

Jack Russell Lab mixes do not need intensive grooming, but they do require daily brushing to reduce shedding. They also need periodical bathing.

Grooming Jackadors is easy because they have short hair. They are double-coated. This results in large amounts of shedding.

Jackadors are easy to maintain. Your only concern is shedding. Jack Russell lab mixes shed most in spring and autumn. They shed the least during the winter.

Try not to bathe your Jackador too often. When you do, use moisturizing shampoos and conditioners. This way you will reduce skin dryness. Dry skin causes excessive shedding.

Jack Russell Lab mixes are great companion dogs. They are intelligent, playful, and unsuited for people who like to sit down all day. Jackadors make great guard dogs. They like to be mentally stimulated.

They are a small to medium-sized breed. Jackadors are intelligent and protective of their families.

If you consider Jack Russells’ and Labradors’ temperaments, Jackadors are a fun mix to be around. They are affectionate but are not suited for families with small pets.