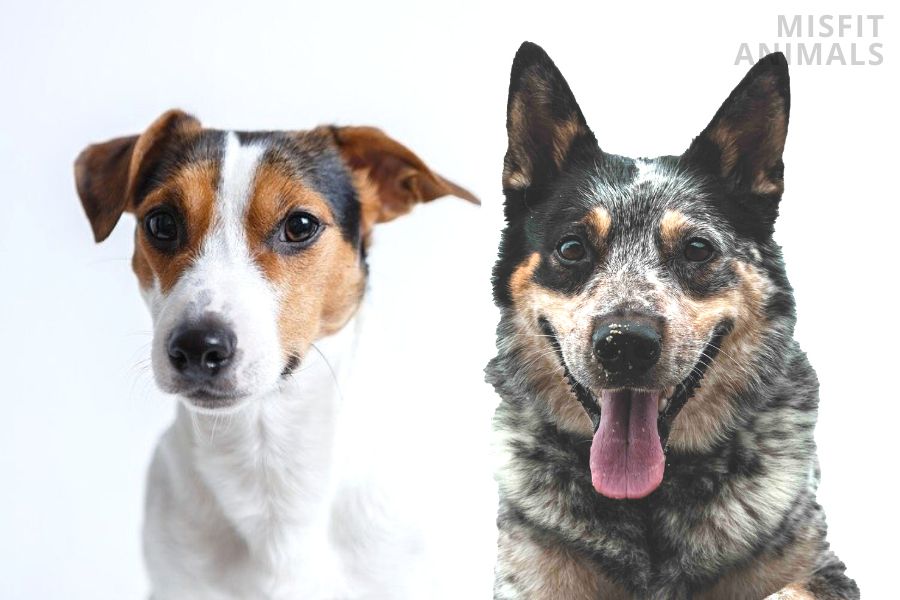 The Blue Heeler Jack Russell mix is the result of crossbreeding Blue Heelers and Jack Russell Terriers. They are intelligent and obedient dogs. They love to have a job to do and require a lot of physical activity.

The Blue Heeler is a compact, sturdy dog. The Jack Russell Terrier is full of energy.

When you mix the two, you get the Blue Heeler Jack Russell Mix, also known as a Cattlejack.

In this article, you will learn about their appearance, health issues, traits, and behavior patterns.

This will help you understand them better and decide if you should adopt one into your family.

What Is a Blue Heeler Jack Russell Mix?

A Blue Heeler Jack Russel mix is a crossbreed between a Jack Russell Terrier and a Blue Australian Cattle dog.

As a mixed breed, this dog doesn’t have an official name but is most commonly referred to as a combination of the parents.

This breed is not recognized by the American Kennel Club because it is a crossbreed.

Blue Heeler Jack Russell mixes are small or medium-sized and have similar colors to one or both parent breeds. They are loyal and obedient but can be stubborn.

Cattlejacks can adapt to apartment living but are happier when they spend time outdoors. They are energetic and require around 30 to 40 minutes of physical exercise per day.

They are friendly and affectionate, but not pet-friendly.

3 Reasons To Get a Blue Heeler Jack Russell Mix

The Blue heeler Jack Russsell mix is independent. Still, they are loyal and form strong bonds with their family members.

They are loving but not clingy. They are more like adult family members than toddlers.

Cattle-Jacks love to spend time with their owners as long as they are engaged in mentally challenging activities.

Blue Heeler Jack Russell mixes are smart and understand what humans expect of them. They get this trait from both their parent breeds.

Jack Russells are also smart. They came 46th in the same test, which is still above average.

Cattlejacks were bred for herding cattle. This increased their protective instinct and made them pay attention to possible dangers. They are great at signaling potential threats and are wary of strangers.

Heeler Jacks do not allow strangers to trespass your property unless you give them permission.

Once you introduce the strangers, the Heeler Jack becomes friendly.

3 Reasons Not To Get a Blue Heeler Jack Russell Mix

Jack Russell Cattle Dog mixes have a predisposition for aggression. They don’t like strangers and don’t behave well around small children.

1. Is Not Great Around Children

Blue Heelers are reactive to sudden movement and impatient. They were initially bred for herding and did so by biting the cattle.

This predisposes their offspring to nip young children, especially if they start running.

Through intensive training and early socialization, Heeler Jack mixes can be controlled. It is still not recommended to leave them around young children because of unpredictable behavior.

They are not aggressive by default but react if provoked.

Blue Heelers are not aggressive but stand up for themselves. They don’t back down if they feel in danger.

You can prevent aggressive behavior by training and socializing your dog in puppyhood. Keeping them engaged in a lot of physical activity also reduces aggression.[3]

Heeler-Jacks are independent. They inherit this trait from Blue Heelers because of their herding background. Strangers were seen as a possible threat, which developed underlying aggression.

If you have a lot of friends that like to come over to your house, make sure you introduce them first to avoid aggression.

The Heeler Jack Russell mix origin is not well documented. There is no evidence of a specific time and place where the Cattle-Jack was initially bred. This crossbreed is relatively new and grows in popularity. It is not recognized by the American Kennel Club, as crossbreeds are not accepted.

The Cattlejack’s parent breeds have a history of more than 200 years.

Jack Russell Terriers originate from England. They were initially bred in the 1800s for fox hunting. In time, people started using them for vermin control. Now, Jack Russells are used for companionship and vermin control.

The American Kennel Club does not recognize them as a separate breed but Jack Russells’ popularity is rising in the US.

The Blue Heeler is also called Australian Cattle Dog. These dogs are either blue or red. They were initially bred in Australia in the 19th century. The breed was introduced in the United States in the 1940s.

Jack Russell Cattle dog mixes are lean dogs who have a muscular appearance. They have stiff-floppy ears and pointy tails. Cattle-Jacks have compact bodies and can display deep chests.

Blue Heeler Jack Russell mixes are small or medium-sized. Their height ranges from 10 to 20 inches. This depends on which parent they are more similar to.

As in most breeds, female Cattlejacks are smaller than males.

The weight of Cattlejacks is proportioned to their size. They weigh anywhere from 13 to 50 pounds.

The color of Jack Russell Blue Heeler mixes is not 100% predictable. They are either white or blue with markings.

Pure white Cattlejacks are rare and are the result of breeding pure white Jack Russells with pure white Blue Heelers.

Cattlejacks’ markings have many different colors:

The chances of a Cattlejack having tickings are high as Blue Heelers always have the gene, and Jack Russells can it.

The ticking gene is not highly spread among Jack Russell Terriers.

The blue appearance of Cattle Dogs is the result of the ticking gene. The tickings are made of one or more black hairs. The resulting pattern appears blue.

If they get their color from Blue Heelers, Cattlejacks are born white. If they have solid markings, they are present at birth. They develop ticking when they are around 4 weeks old.

Jack Russell Heeler mix dogs are double-coated. They have short dense undercoats. Their outer coats are smooth or wiry. Cattlejacks can have wiry outer coats if Blue Heelers are mated with wired-coated Jack Russells.

This mix has a dense double coat. The most active shedding seasons are spring and autumn. During these periods, Jack-Heelers need daily coat brushing.

This is not compulsory but needed if you don’t like hair around the house.

No, Jack Russell Blue Heeler mix dogs are not hypoallergenic.

Dogs that shed a lot are not hypoallergenic. People are allergic to dogs’ dander and saliva. Dander gets attached to dogs’ hair. The more they shed, the more allergenic they become.

Jack Russell Heeler mixes are active and energetic. They love mentally-engaging activities and like having a job to do as their parents are hunting and working dogs. They are not happy sitting on the couch all day.

Yes and no. Jack Russell Blue Heelers are highly intelligent but independent. They understand what you need from them, but find ways to get away with what they want.

Cattlejacks are generally obedient and eager to please but, above all genetic inheritance, every dog is unique.

If you start training during puppyhood, the chance for successful training is higher. You will have great results by applying structured training.

Some Blue Heeler Jack Russell mixes bark a lot, but not all.

If they resemble Blue Heelers, they only bark to signal a potential theta. They are silent workers and are not predisposed to braking.

Engage this mix in plenty of physical exercises and mental stimulation. This way they will be less distracted by unfamiliar noises.

Related: Why Is My Jack Russell Terrier Barking?

Cattlejacks can be born deaf. This type of deafness is caused by a recessive gene. Recessive diseases require both parents to pass on the gene for the disease to manifest.

Both Jack Russell Terriers and Blue Heelers can be carriers.

Congenital hereditary deafness can affect one or both ears. The disease is generally linked to a lack of hair pigmentation, due to a reduction in melanin levels.[5]

Progressive Retinal Atrophy[6] is a disease that leads to blindness. It consists of the deterioration of the retina.[7]

The retina holds the neural receptors that carry visual information to the brain and transform it into an image. Once these receptors deteriorate, they can not be repaired.

The progression of retinal atrophy occurs within months or years, depending on each dog. Genetic testing for Progressive Retinal Atrophy is available and highly recommended for Heller-Jacks.

Primary Lens Luxation[8] is a recessive disorder and requires both parents to pass on the gene. This disease causes misplacement of the natural lens in a Cattlejack’s eye. As a result, the CattleJackexperiences vision problems.

It is difficult to realize that your dog doesn’t see clearly because they can’t communicate. Take your dog to regular ophthalmological exams to identify any potential problems.

Hip dysplasia[9] is a disease that affects Blue Heelers. Cattlejacks inherit a predisposition for it. This disease affects the well-being of dogs because it causes pain and impairs movement.

Jack Russell Blue Heeler mix dogs have an average lifespan between 12 and 16 years. If they resemble Jack Russells, they can live even more.

Cattlejacks have great genes in terms of lifespan. Jack Russells have the lobngest life expectancy among pet dogs. Their average lifespan is 12.72 years[10]. The oldest Jack Russell Terrier died at the age of 20.

Jack Russell Heeler mix puppies cost between $500 and $1200. If the breeder uses champion bloodline parents, the price is higher.

The initial investment is higher if you consider the purchases you require for a new puppy.

This includes a bed, grooming tools, feeding bowls, a leash, and more.

Blue Heeler Jack Russell mix dogs are easy to take care of but are not suited for sedentary owners. Despite their low grooming requirements, they require attention from their owners. This attention involves spending time together and ensuring they get enough physical exercise.

Cattlejacks can adapt to apartment living but need daily walks outside. If they don’t get enough physical exercise they get frustrated.

This can lead to behavior issues.

This table illustrates the needs of Blue Heeler Jack Russells.

Blue Heeler Jack Russell mix dogs are highly intelligent and make great companions. They are easy to take care of but require physical exercise and mental stimulation. These dogs make great watchdogs and don’t like strangers. They are predisposed to aggression.

If you decide to buy a Blue Heeler Jack Russell, you will have a loyal and reliable companion.

Do Cattlejacks Have Face Masks?

Yes, the majority of Cattlejacks have face masks. They inherit this from both Jack Russells and Blue heelers. Jack-Hellers can have face markings around one or both eyes. They can display a dark color on their muzzle also. This type of coloring is called a melanistic mask.[4]

Can a Blue Heeler Jack Russell Mix Be Red?

This is possible but the chances are low. Blue Heelers have a dominant blue gene but also carry a red gene. If they are mated with a Jack Russell Terrier that has red markings, the resulting puppy can be red–mottled or speckled.