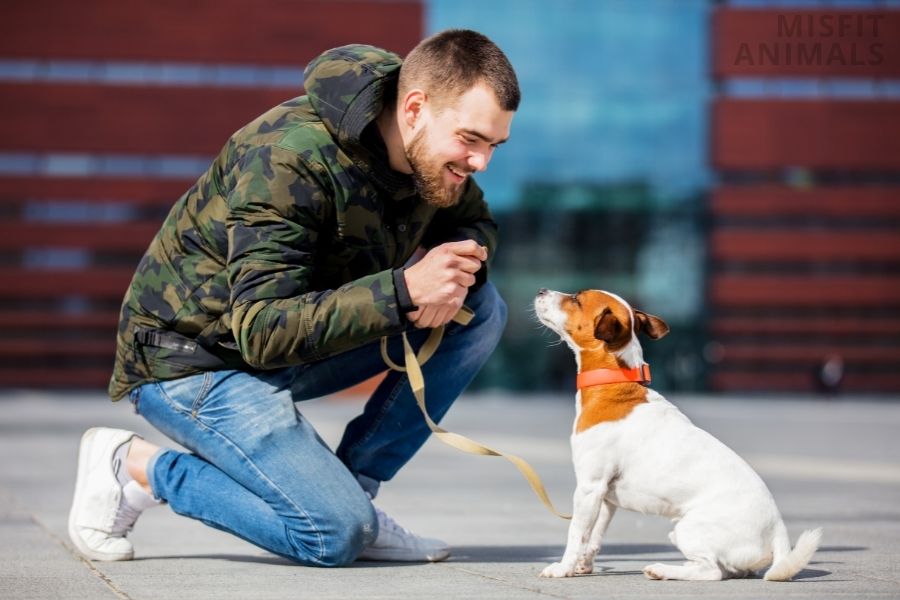 Jackies are easily trainable. And, they get smarter by engaging in activities.

You will also learn how to measure your Jack Russell’s intelligence.

Jack Russell Terriers are smart dogs. They are agile and learn new tricks fast. Jackies have an average intelligence in terms of obedience. Their ability to perform the tasks they were bred for is high. They easily understand what humans want from them.

It is difficult for scientists to compare the intelligence of different dog breeds. Each breed excels in some areas where others do not.

There are also different types of intelligence observed in dogs.

The following table illustrates how Jack Russells score in various types of intelligence.

How To Measure The Intelligence of Jack Russell Terriers

You can measure the intelligence of your Jack Russell Terrier by engaging them in activities and observing how they react. The time it takes them to solve tasks reveal their intelligence.

These activities measure your dog’s ability to:

Professionals use various factors to assess dog cognition abilities. These factors are measurable. You can apply tests to identify how your Jack Russell approaches various situations related to these factors.

In a study[2] made on canine cognition, the factors measured were divided into two categories, as follows:

You can determine if your Jack Russell is intelligent by applying various tests. These tests are easy to apply and do not require professional assistance.

Your Jack Russell is smart if they are able to perform the following tasks:

Place an obstacle in front of your dog’s food bowl. Bring them to the obstacle and let them get to the food bowl by themselves.

To make it even harder, build a maze that your dog has to pass through to get to the food. Set a timer to measure how long it takes for your dog to reach the food.

Apply this test[4] while your dog has an empty stomach. Place two food plates on the floor. Put more food on one plate than on the other. Your dog will start eating from a plate. When they choose one, remove the other.

Repeat this 6 times and see how often your dog chooses the larger quantity of food. If your Jack Russell chooses the bowl with a larger amount of food most of the time, they are smart.

Instinctive intelligence measures a dog’s ability to carry out tasks they were bred to do. These tasks include guarding, fetching, herding, pointing, supplying companionship, and more.

Jack Russells were bred for hunting for more than 200 years. Their hunting genes are strong. This makes them highly intelligent in terms of instinctive intelligence.

It is difficult to say whether Jack Russell Terriers are more instinctively intelligent than other breeds.[5] Breeds are used for different taks. This is why they have have different abilities.

Jack Russells display high levels of adaptive intelligence. They can learn on their own and adapt to new situations. They are also skilled at learning how to benefit from their environment.

Adaptive intelligence measures a dog’s ability to learn from and adapt to its environment. This refers to what a dog is capable of learning by itself.

Adaptive intelligence often comes down to individual dogs and not the breed. This characteristic differs among individuals of the same breed. It also correlates to environmental factors, socialization levels, or training.[6]

If a Jack Russell terrier has not been socialized as a puppy, its adaptive intelligence will be lower as adults. Dogs that are exposed to different environments adapt easier to new situations.

Dog owners raise their dogs differently. This makes it hard to say that all Jack Russells have high or low adaptive intelligence levels.

Jack Russell terriers display average to high levels of emotional intelligence. They are used to interacting with humans and identifying what humans want from them.

Emotional intelligence in dogs is difficult to assess. Dogs can not verbalize their feelings. Humans can understand dog emotions only by observing their behavior and body language.

An easy way to check your Jack Russell’s emotional intelligence is to observe how they react when you are sad or sick.

Throughout their breed’s history, Jack Russells had to learn what their owners wanted from them. This included finding and retrieving prey.

The ability of understanding humans’ demands is encrypted in their genes.

Canine working and obedience intelligence measures dogs’ ability to understand what humans want from them. It also refers to the dog’s willingness to perform the action.

The fact that Jack Russells have scored average on this test is a desired quality in dogs. The smartest dogs can identify human intention relatively quickly. This means they are obedient, but they also know what they can get away with.

Highly intelligent dogs in terms of obedience need to learn the limits imposed on them. This requires more energy on your part.

The brain of a Jack Russell Terrier measures around 4.2[9] cubic inches. It weighs approximately 2.4 ounces[10]. These figures are influenced by the activities a Jack Russell has been exposed to. A Jack Russell’s body size and weight also play a role, as well as their environment.

The size of a Jack Russell’s brain is highly influenced by genetics. This genetic information is a result of selective breeding. A study conducted in 2019 shows that humans are capable of altering the brains of dogs.[11]

The differences in brain size among breeds are correlated with their behavior. The size of the dog and their skull shape also play a key role.

The size of a dog’s brain is not necessarily correlated with all intelligence types. A study[12] on 7000 dogs from 74 breeds suggests brain size does not predict social intelligence levels in dogs.

Yes, Jack Russells Terriers are easy to train. They are intelligent and agile. Jack Russell terriers are quick learners. They have a native ability to understand human commands.

Jack Russells were bred for hunting. This means they have an ability to understand what humans want from them.

They are also used to working with other dogs. This ability is a result of hunting in packs.

The potential problem training Jack Russels is they are easily distracted. This happens when a small animal or object passes by. Their hunting instinct is what causes this behavior.

Yes, you can make Jack Russell Terriers smarter. A part of a dog’s intelligence is hereditary. The other part is acquired through life experiences. You can make your Jack Russell smarter by exposing them to various activities and environments.

The study states that 20% of memory and physical reasoning is heritable in dogs. These findings suggest that Jack Russell Terriers’ intelligence can be expanded.

You can make your jack Russell terrier smarter by:

Jack Russell terriers are smart dogs. They are easy to train and agile. Jackies can easily understand what their owners want from them. They easily adapt to their environment. It is easy for them to learn new things on their own. They can understand human emotions and empathize with their owners.

Jack Russells are great family dogs. They are easy to train despite their distractibility. You will have a great time with your Jack Russell, especially if you spend a lot of time with them. This will help you increase their intelligence levels.