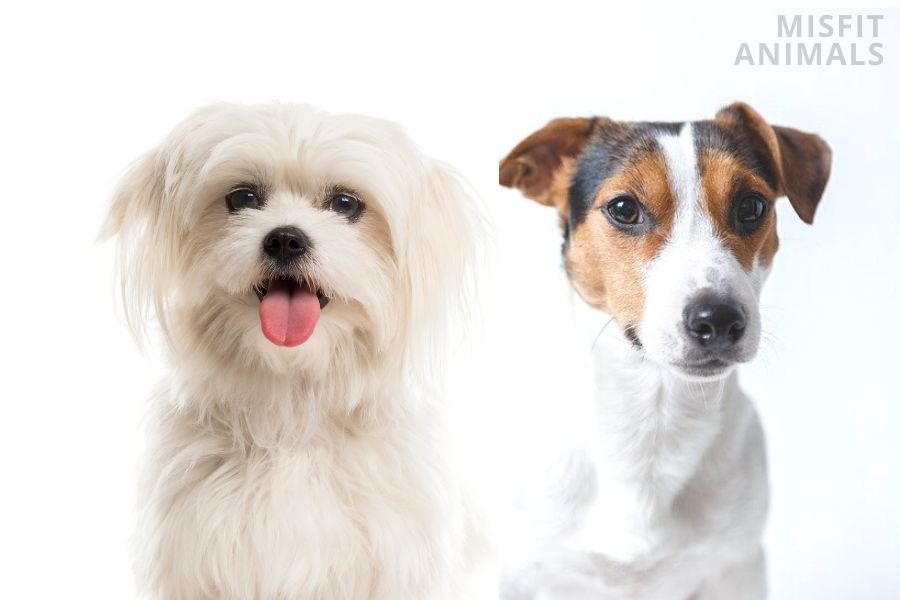 The Jack Russell Maltese mix is a crossbreed of a Jack Russell Terrier and a Maltese. They are cheerful dogs that need a lot of physical exercises. Both of the parent breeds were bred for hunting. They are an affectionate and energetic small breed.

But they are also energetic and need to be trained properly. If not, they can become dominant.

This article explores all the aspects that give the breed its traits. You will learn all you need to know about their lifestyle, behavior, and more.

Jack Russell Maltese mixes are intelligent and agile. They like to display their affection and make great family dogs. They are not great around children when they are young, but this can be changed through early training.

Maltese Jack Russell mixes are small dogs with a long life expectancy. They are cheerful and need a lot of physical exercise.

Other names for the Jack Russell Maltese Mix include:

The main Jack Russell Maltese mix dog characteristics are listed in the table below.

3 Reasons To Get a Maltese Jack Russell Mix

Maltese Jack Russell mixes are easy to train and have a low potential for causing allergic reactions. They are loving and form strong bonds with their families.

People who like to cuddle with their dog will be happy owning a Jacktese.

Jack Russell Terrier Maltese mixes are affectionate and loving dogs. They make strong connections to the members of their family and are both protective and eager to please.

Maltese Jack Russells are intelligent dogs. They inherit their instinctive intelligence from their parents.

Both parent breeds were bred for hunting. Hunting dogs like to please their owners and are highly obedient. Jack Russell Maltese mixes can be stubborn but they are easy to train.

Malteses are hypoallergenic dogs. This means that they trigger allergic reactions less often. If Jackteses inherit their coat type from their Maltese parent, they have low allergic potential.

3 Reasons Not To Get a Maltese Jack Russell Terrier Mix

Jack Russell Terrier mixes need plenty of physical exercises and they like to be in charge when playing. Jackteses puppies are not suited for children. Their actions and reactions are unpredictable.

Maltese Jack Russell mixes need at least 60 minutes of physical exercise daily. They need daily walks and occasional intense physical activities, such as running. Activities that require a high physical effort are suited for them.

Jack Russells are highly active dogs, but Malteses’ exercise requirements are low. As a result, the Jacktese needs moderate to high physical exercise.

Jacktese can display dominant behavior. This happens to dogs who haven’t been socialized and trained early. It is a trait specific to the Maltese breed. The dominant behavior is controlled by maintaining a well-established hierarchy.

It is easier to control dominance by prevention, rather than correction. This makes early behavior interventions essential.

Jack Russell Maltese mixes have a dominance instinct. When they are young, this instinct is harder to control. Jacktese puppies have unexpected reactions around children when they are young.

This happens when children hit them by accident, or pull their ears.

As adults, Maltese Jack Russells are well behaved around your children. This comes as a result of early training and socialization.

If they are not socialized with kids in puppyhood, adult Jackteses are not suited around young children.

The exact origin of the Jack Russell Terrier Maltese mix is unknown. The crossbreed is not recognized by the International Designer Canine Registry or the American Canine Hybrid Club.

The history of Jack Russell Terriers begins in the 1800s in the United Kingdom. The breed was a solution for hunters. They needed a small dog to hunt foxes.

Jack Russell Terriers had darker colors at first, making it difficult for hunters to distinguish them from their prey. This is why they bred them to have larger white patches.

Jack Russells were recognized by the American Kennel Club for 5 years, from 1998 to 2003. Since 2003, they have fallen into the Parson Russell Terrier category.

The Maltese dog dates back to antiquity[1]. It was one of the first dogs used as human companions. The modern Maltese is a toy dog genetically similar to the Bichon and Havanese.

These spitz-type dogs are currently used for companionship and exhibitions. Throughout its history, the breed has been used for hunting small prey.

The origin of the Maltese dog has a question mark on it. The Malteses have been documented in Romani and Ancient Greek literature. Researchers generally link this dog breed to the island of Malta. The American Kennel Club recognized the Maltese in 1888.[2]

The Maltese and Jack Russell mix dog is small, weighing between 8 and 10 pounds. It can be white or have markings specific to Jack Russells. These markings are black, brown, red, yellow, or fawn.  Their coat can have different lengths depending on which parent they resemble more.

Maltese Jack Russells can be pure white, or display markings specific to Jack Russells. The genes that determine coat color in dogs differ from breed to breed.[3]

It all comes down to which genes Jacktese inherit from their parents.

They can also have a dark face mask. This mask can not be passed on to the Jacktese as it needs both parents to pass on the gene to manifest.

Malteses don’t have the gene for this type of mask, called a melanistic mask.[4]

The coat of a Maltese Jack Russell varies from dog to dog. It is hard to predict the genes crossbreeds manifest. This depends on the genes passed on by their parents.

This table illustrates the coat features Jacktese can inherit from their parent breeds.

Jack Russell Terriers are double-coated, which is why they are moderate to heavy shedders. Their coats are dense and waterproof.

They can have one of three coat types:

Malteses have long coats. Their hair resembles human hair. It grows constantly throughout their lifetime with minimal shedding.

The combination of these two types of coats stands to luck. One can not tell what a Jacktese’s coat will look like as an adult. Puppies are born with one coat layer. This layer transforms into a single or double coat as they grow up.

The average height of Jack Russell Maltese mixes ranges between 8 and 15 inches. Their weight ranges between 10 and 18 pounds. They are considered small dogs.

Some Jacktese fit the miniature breed measurements. This happens if they resemble their Maltese parent the most and weigh less than 12 pounds.

Jack Russell and Maltese mixes are energetic dogs. They are fun to be around and display a great deal of affection. They are great family dogs but are not suited for children while they are puppies.

Jackteses have many behavior issues if they are not socialized from puppyhood. They need early training because they have strong personalities and can become dominant.

They can also engage in aggressive behavior if they are not trained.

Highly intelligent dogs are difficult to control. They recognize your emotions and find alternative ways to get their way.

This table illustrates some traits Jackteses can inherit from their parent breeds.

Do Jack Russell Maltese Mixes Have a Hunting Instinct?

Yes, Jack Rusell Maltese mixes have a highly developed hunting instinct. They inherit this from both Maltese dogs and Jack Russells.

The hunting instinct that Jack Russell Maltese mixes have comes with many other desirable characteristics. They are obedient, eager to please, athletic, and have great stamina.

They are also great runners and have advanced smelling abilities.

This can become a problem if Jackteses are not socialized and trained from an early age. They are easily distracted by small animals and objects. This behavior can become dangerous if they run into the street while chasing something.

The Jackets is a healthy dog. They have great stamina, especially if they exercise on a regular basis.

Despite their general health, they are predisposed to medical issues:

Jackteses are affected by dental issues such as periodontitis and misalignment. Both Jack Russells and Maltese dogs have a predisposition for teeth issues.

If a Jack Russell Maltese mix resembles the Maltese, they can experience misalignment. This happens when the puppy teeth don’t fall out when they are supposed to, resulting in irregular growth for the new teeth.

The worst that can happen is for the bite to shift out of alignment, leading to a scissor bite. As a result, the food is not chewed properly and the nutrients are not well absorbed.

Both Jack Russells and Maltese dogs are prone to patella problems. The most common is Patellar luxation. This health condition can be treated with surgery.[6]

Jack Russell Maltese mixes are prone to breathing issues, such as asthma. They need regular vet checkups. If discovered in time, this issue can be controlled.

The lifespan of a Jacktese is highly correlated to their lifestyle. If they live sedentary lives and are anxious, their life expectancy decreases.[7]

Maltese Jack Russell mixes need daily brushing. They are prone to dental issues which can be prevented by brushing your dog’s teeth daily. Checking their ears weekly to remove excess hair or wax is also recommended.

This mix can have excessive tear-staining around the eyes.

Have a vet check up on them if you notice this problem.

Maltese dogs are minimal shedders. This is why they are hypoallergenic.

The level of shedding in a crossbred is often hard to predict. This happens when one parent is a heavy shedder and the other does not shed.

How Much Does a Maltese Jack Russell Puppy Cost?

A Maltese Jack Russell Puppy costs between $600 and $1500. Their price varies among breeders.

When buying a Jacktese check if the breeder uses Jack Russells and Maltese dogs as parents. Some breeders use crossbreds as parents. This can add differences to the characteristics discussed above.

Jack Russell Maltese mixes are loving small dogs with energetic personalities. They are fun to be around. These dogs are generally healthy, even though they are predisposed to several health conditions.

They have a long lifespan and can become problematic if not trained and socialized in puppyhood.