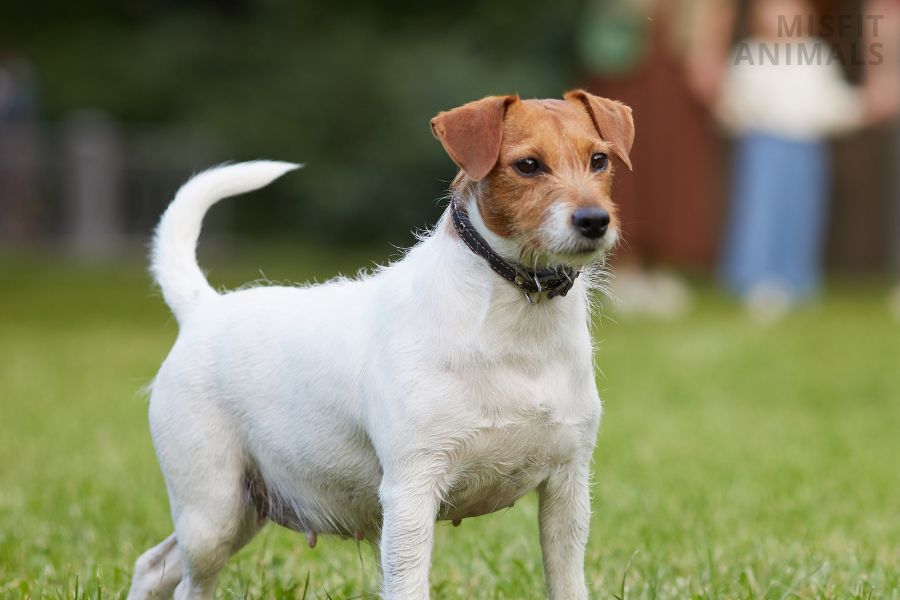 Jack Russells live between 13 and 16 years. The average lifespan of Jack Russell Terriers is 12.7 years.

A study conducted by Britain’s Royal Veterinary College concluded that the general average dog life expectancy is 11.2 years. The same study says Jack Russells are the longest living dogs on the list.

But Jack Russells Terriers’ lifespan can decrease because of several health issues. These issues include, among others, genetic health issues specific to the breed.

The good news is owners can extend their dog’s lifespan by following some simple guidelines.

In this article, you will learn how the lifespan of Jack Russels compares to the ones of other dog breeds, and the factors that influence how long Jack Russells live.

How Long Do Jack Russells Live Compared to Other Breeds?

Compared to other breeds, Jack Russell terriers live 1.5 years longer than the general average. Jack Russells are the most long-living dogs with an average life expectancy of 12.72 years, according to a study conducted in 2020 by Britain’s Royal Veterinary College.[1]

Terriers are ranked high on this list. Yorkshire Terriers came second with an average life expectancy of 12.58 years. French Bulldogs are at the bottom of the list with only 4.53 years.

Jack Russell Terriers are not genetically modified. Their bodies have evolved naturally. This highly reduces the chances for various diseases that other breeds, such as French Bulldogs, have to face.

In the tables below, you can find how Jack Russells’ lifespan compares to other terriers in the study group and what the lowest ranking breeds are.

Jack Russells and other Terriers:

Jack Russell Terriers are puppies until they reach five months. When they reach 5 to 7 weeks, they need socialization with humans and, especially, other dogs. This type of activity is essential for reducing anxiety and aggression later in life.[2]

Increased stress response in dogs has been proven to reduce their life expectancy.[3]

Jack Russells are adolescents from 5 to 12 months old. During this period, training is a key factor influencing their safety. As they are easily distracted by other creatures due to their hunting genes, Jack Russells easily end up in the street following a squirrel.

Proper training can reduce the chances of Jackies’ reckless behavior.

During Adulthood, Jack Russells need a lot of exercise to reduce the risks of certain health issues. Exercise also decreases anxiety and reduces the chances of developing associated issues. Some of these can cause early death.

What Affects the Lifespan of Jack Russells?

Jack Russell Terriers need at least an hour and a half of exercise per day to stay healthy. When they lack exercise, they gain weight, are more anxious and aggressive, and their cognitive ability drops.

Jack Russells have a high average life expectancy but their mortality rate is influenced by various diseases. Jackies can get genetic diseases speciffic to their breed, or health issues that affect other breeds, also.

The majority of the health conditions decreasing Jack Russells’ lifespan are treatable if identified early on.

Accidents Due To Short Attention Span

Jack Russells have a short attention span. This puts them at risk of running into the street chasing objects, animals, or other dogs.

Jack Russells’ life expectancy can be shortened by various health issues caused by recessive genes. Recessive genes are inherited genes. A Jack Russell will be born with or develop such diseases if both parents pass these genes on to their offspring.[4]

The main Jack Russells diseases caused by recessive genes are:[5]

Congenital deafness is present in more than 100[7] dog breeds. This disease is usually accompanied by an obvious lack of pigmentation. Congenital means it starts at birth.

Deafness is not a cause of death on its own. The dangers occur when dogs are not supervised. Deaf Jack Russells require patience and the use of specific tools, such as double fail leash systems.

Ectopia Lentils are also called lens luxation. Jack Russels struggling with this condition experience a displacement of the natural lens of the eye.

Cataracts are characterized by the blurring of the neutral lens of the eye.

Jack Russells who experience these conditions can go through surgery to fix their loss of vision. Unfortunately, it is difficult for owners to identify these issues, especially in their initial phase.

In many cases, Jack Russells go blind because of these genetic conditions, which can trigger early death due to accidents.

Congenital Myasthenic Syndrome is a genetic disease manifested by abnormal muscle weakness. The symptoms of this disease appear when Jack Russells are only a few weeks old. Severe cases require early euthanasia.[8]

Jack Russells with Von Willebrand disease are prone to excessive bleeding because their blood does not coagulate properly.

This condition can reduce the lifespan of Jack Russells. If they suffer an injury, they will lose high amounts of blood, potentially dying before or during surgery.[9]

Legg-Calve-Perthes disease[10] is common in small breeds and is characterized by the deterioration of the head of the dogs’ femurs. Without surgery, this disease leads to arthritis and is life-altering.

Jack Russells with Legg-Calve-Perthes Disease live shorter lives because of their reduced ability to exercise.

Jack Russell Terriers are susceptible to various health conditions that can decrease their life expectancy:

Ear infections and periodontal disease lead to the accumulation of bacteria inside their bodies. Bacteria can migrate to essential organs, such as the heart or the brain, causing severe health issues and sometimes premature death.

How To Increase the Lifespan of Jack Russell Terriers

You can increase the life expectancy of Jack Russell Terriers by:

High-quality dog food is full of nutrients that protect your Jack Russells’ health. Make sure to include various ingredients, macro-, and micronutrients, as well as probiotics and prebiotics for their immune system.

These issues include obesity and arthritis.

Engaging in various interactive games with your Jack Russell and spending time together reduces stress levels. It also eliminates the risk of cognitive degeneration. These factors highly influence your dog’s longevity.

Grooming is essential to avoid infections. Cleaning your jack Russell’s ears and teeth regularly reduces the risk of bacterial infections.

Spaying and neutering are medical procedures that can increase the lifespan of Jack Russell Terriers. These procedures are usually performed during the first 12 months of age.

What Is the Oldest Living Jack Russell?

The oldest dog that ever lived was an Australian Cattle Dog named Bluey, who was based in Australia and managed to live up to 29 years and 160 days.

Even though Jack Russels Terriers have the highest average life expectancy compared to other breeds, there are exceptions. Willie only reached the 24th position in the Guinness World Records.[12]

There is no current documentation of Jack Russells who are more mature than Willie but the hope that a fellow Jackie will beat the record lies in every owner.

Jack Russell Terriers live long lives compared to other breeds. They often reach 13 and 16 years old. Their life expectancy is in some cases decreased by certain breed-specific diseases. Most of these health conditions are preventable.

If you take proper care of your Jack Russell and spend quality time together, the chances of being the lucky owner of a 20-year-old dog increase tremendously.