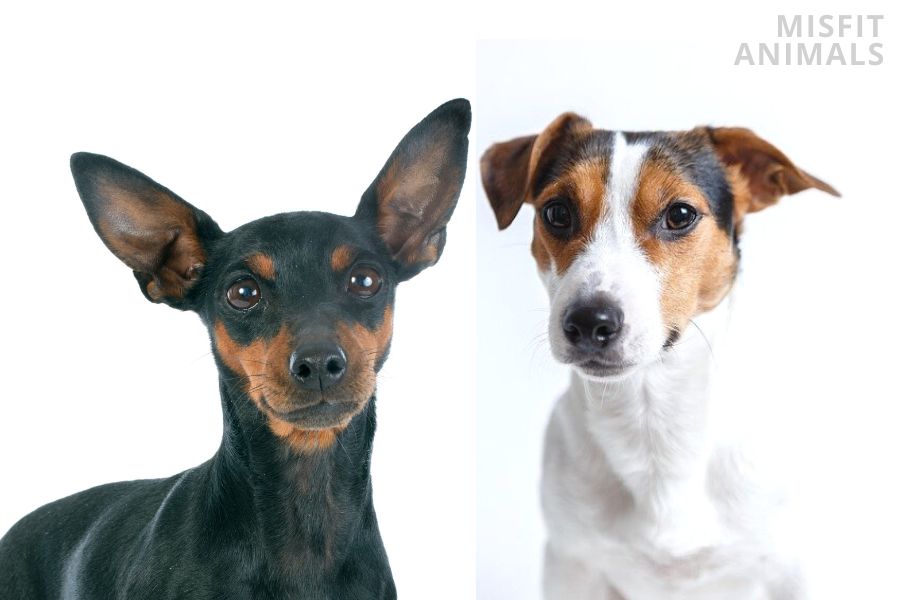 The Minnie Jack is a crossbreed between Jack Russell Terriers and Miniature Pinscher. Minnie Jacks are intelligent and agile. They are affectionate towards their families but have a highly developed hunting instinct.

They like pleasing their owners and are easy to train, picking up on new commands fast.

This article explores all the essential areas that revolve around Minnie Jacks:

What Is a Minnie Jack? – An Overview

A Minnie Jack is a hybrid between Jack Russell Terriers and Miniature Pinschers. Min Pin Jack Russell mix dogs are intelligent and active. They adapt well to various living conditions but prefer a wide outdoor play area. Even though they are moderate to heavy shedders, grooming needs are minimal.

Minnie Jacks are small dogs. They have short to medium coats that range from black and blue to isabella, red, brown, and fawn.

This breed is relatively healthy, even though they are prone to several health issues.

Minnie Jacks have unique personalities and form strong bonds with their families.

The main Minnie Jack characteristics are listed in the table below.

Other names for the Jack Russell Miniature Pinscher Mix include:

The Minnie Jack is not recognized as a separate breed by the American Kennel Club. But, they are acknowledged by designer breed clubs.

This table lists the designer breed associations that recognize the Minnie Pinscher Jack Russell mix as a separate breed.

3 Reasons To Get a Minnie Jack

Minnie Jacks are smart and make great watchdogs. They behave well around other dogs and like to go on playdates.

1. The Minnie Jack Is Intelligent and Agile

Minnie Jacks are smart dogs and learn new tricks easily. If trained properly, Minnie Jacks are astute companions. This mixed breed understands what their owners want from them.

All of these traits allow owners to have fun while training.

Minnie Jacks can be stubborn if they want something badly. Once you get to know them and adapt to their learning style, you will enjoy the time spent together.

2. The Minnie Jack Interacts Well With Other Pets

Minnie Jacks socialize well with other dogs. You don’t have to worry if you already have a dog and want to bring a Minnie Jack into the family.

They enjoy playdates and love being around other dogs. They are well-behaved, especially if trained.

3. The Minnie Jack Is a Great Watchdog

Minnie Jacks are alert and display a highly developed protective instinct. They pay attention to noises so they can alarm their family of intruders.

The Miniature Jack has the habit of signaling when something is wrong. They will not restrain from barking if they suspect danger.

3 Reasons Not To Get a Minnie Jack

Minnie Jacks are not the best dogs for young children. They are highly energetic and shed a lot.

1. The Minnie Jack Does not Behave Well Around Children

Minnie Jacks are not the perfect dogs for young children. They’re not bad if trained, but not as caring as other breeds.

They can be stubborn, especially when they don’t get what they want. They have the potential of becoming aggressive if they are not socialized and trained when they are puppies.

2. The Minnie Jack Is Highly Energetic

Minnie Jacks need 60 to 90 minutes of daily physical exercise. This is a problem if you enjoy a laidback lifestyle.

They can also become aggressive.

3. The Minnie Jack Is a Moderate to Heavy Shedder

Minnie Jacks shed. Their hair is dense and regenerates often. If you don’t have time for grooming and hate dog hair in the house, the Minnie Jack is not for you.

The origin of the Min Pin Jack Russell mix is not clear. They seem to have originated in the United States in the 2000s. This crossbreed is relatively new and there is not enough information to pinpoint a specific time and location for its origin.

Jack Russell Terriers originate from Great Britain. Their breeding began in the 1800s and their initial purpose was to hunt foxes. In time, people began using them for vermin control.

The Miniature Pinscher has been around for more than 200 years.

All the data suggests that the Min Pin is a mixed breed and has the following ancestors:

The Min Pin has no relation to the Doberman, despite popular belief. This belief is due to an early inaccurate American Kennel Club description of the breed.

In the beginning, the Min Pin was referred to as the “Pinscher”. In 1972, its name was changed to “Miniature Pinscher”.

Mini Jacks are unique small dogs with short hair. They have tiny bodies and fine bone structures. Minnie Jacks are athletic and have strong muscles. They display various color patterns. This depends on what genes they inherit from their parents.

Even though they resemble Jack Russells, Minnie Jacks have low to zero chances of white spotting.

Minnie Jacks can have the following colors:

Jack Russell Min Pin mixes are crossbred, which means they inherit traits from both parents. There are some limits to what Minnie Jack puppies look like, but a 100% prediction is impossible.

Minnie Jacks have double-layered waterproof coats. Their undercoat is soft, while the outer coat can be smooth or wiry.

Their coat is generally dense and straight. It provides protection from insect bites and various environmental factors.

Minnie Jacks can have dark face masks, called melanistic masks. For this to happen, both parents need to pass on the genes.

How Big Do Jack Russell Min Pin Mix Dogs Get?

Jack Russell Min Pin mix dogs have a small stature. They weigh less than 22 pounds. The breed is thought to be a part of the Toy group but the Minnie Jack does not fall in this category, even if it is tiny.

Toy breeds are dogs that weigh between 4 and 8 pounds and measure between 7 and 11 inches in height.[1]

While some people think of the Minnie Jack as a Toy breed, this dog is bigger than the requirements.

The following table illustrates the difference in size between male and female Minnie Jacks.

Miniature Pinscher Jack Russell mixes are intelligent and agile. They form special bonds with their family members and are fun to be around. Min Pin Jack Russells can become aggressive if not socialized and trained during their puppyhood.

Both Jack Russells and Min Pins were bred for hunting. They have been used for vermin control, which explains why Minnie jacks display such a well-developed hunting instinct.[2]

Hunting dogs have a few qualities worth mentioning:

Mini Pins are stubborn because they are an independent breed. Minnie Jacks can inherit this trait, which makes early training and socialization essential.

Minnie Jacks are active dogs that like to run, engage in play dates, and play with their owners.

They behave well around other dogs but can become aggressive. This happens to unsocialized dogs, making training vital.

Aggression is easily controlled though. Keep your Minnie Jack engaged in activities that challenge them mentally and physically.

This table illustrates the main traits that Minnie Jacks can display in relation to their parent breeds.

Yes, Minnie Jacks bark a lot. And they bark loudly. They inherit this trait from both parent breeds. They bark loudly because they have been used for vermin control. This is how they let their owner know they found prey.

Minnie jacks are great watchdogs. They detect danger quickly and let their owners know something is wrong. If you live in a quiet neighborhood, Minnie Jacks are not for you.

Related: Why Is My Jack Russell Barking?

The genetics behind disease inheritance attributes various health conditions to both parents.  These diseases are called recessive diseases.

Crossbreds are less likely to develop the genetic issues that their parent breeds are prone to.[3]

The most common diseases that both Jack Russells and Miniature Pinschers are prone to are:

Other diseases that Minnie Jacks can inherit from just one of the parent breeds:

Minnie Jacks are highly intelligent. They bark a lot and are great watchdogs, but they need a lot of physical exercise. They can adjust to apartment living but it is not their most suited environment.

Minnie Jacks are great companions and make great family dogs. Being around your children is not their forte.

If you are determined to get a Minnie Jack, they will offer a lot of affection. They form strong bonds with their family members.