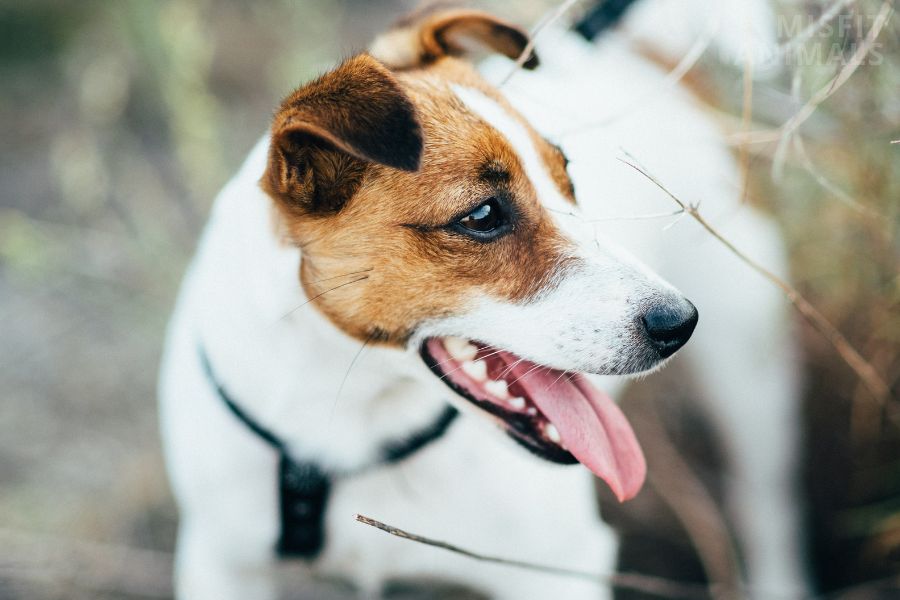 Jack Russell Terriers are mainly white, but can also be tan, brown, black, or a combination of these. They have colored patches on various parts of their bodies.

Each Jackie is distinguishable because of its unique coat color.

This article discusses in detail the color types of Jack Russell Terriers. We will also analyze how Jack Russells get their color and explain the different types of markings.

Jack Russells Terriers have many colors. They also have markings in the form of large and small spots.

Pure white Jack Russell Terriers are rare. They have dark eyes and black noses. This doesn’t guarantee that a pure white puppy will be white when it grows up. Jack Russell puppies can develop color patches as they grow older.

If you decide to buy a pure white Jack Russel puppy, ask your vet to do a BAER test. This test determines the presence of hearing loss in dogs.

The American Kennel Club[2] recommends this test for all Russells Terriers.

Pure white Jack Russell Terriers are not albino dogs. Albino Jack Russells have pink noses and a lack of pigment around the eyes. Their skin and paws are also white.

Albino Jackies have a complete lack of melanin or low levels of it. This makes them more prone to skin cancer.

Tri-color Jack Russells are common. They have a combination of white, black, brown, or tan.

Jack russells can have a tan and black color pattern. This pattern is called tan-point. A specific gene is responsible for this pattern. Jack Russells with the tan-point pattern have tan patches on various parts of their bodies.

The black part of the tan-point pattern can also be brown. The color depends on the genes inherited from the parents.

Both parents need to carry the tan-point gene for Jack Russells to develop these marks.

Tan-point marks appear in many places:

The Tan-point pattern is often encountered in Rottweilers and Dobermans. Tan-point Jack Russells have similar base patterns. They are covered by wide patches of white. This can make the pattern difficult to recognize.

Black and white Jack Russell Terriers have black spots on different parts of their bodies. While they are called “black and white”, they are in fact tri-colored.

It is genetically impossible for a Jack Russell terrier to carry only the genes for black and white hair.[3]

Jack Russells with this coat color have a black and brown or tan color base. The brown or tan patches in their coat are covered with large white patches. This makes them appear black and white.

Chesnut and white Jack Russell Terriers are common. Owners prefer them because they have a sophisticated and uniform appearance.

The pigment responsible for black hair is diluted by a specific gene. This is how Jack Russells get chesnut or dark brown hair.

Jack Russells with red spots have beautiful patterns. These patterns are unique, as none are exactly the same as the parents’.

The tan spots on Jack Russells are determined by a pigment that produces red.

In combination with other genes, this pigment is diluted and results in a tan shade.

Lemon and white Jack Russells are mainly white. They can exhibit light yellow spots on their eyes and years. Sometimes these spots are present on their muzzles or on other parts of their bodies.

The lemon color on Jack Russells is the result of a pigment that creates various color shades. The color shades produced by this pigment vary from deep red to yellow. They include orange, cream, gold, and tan.

Jack Russell Terriers that have yellow spots carry a gene that dilutes the primary color determined by this pigment.

How Jack Russells Get Their Color

Hair color in dogs is determined by melanin. Melanin is what gives color to the skin, hair, and eyes. Dogs have two types of melanin: eumelanin and phaeomelanin. These pigments are the starting colors that contribute to the appearance of Jack Russells.

These pigments interact with various genes in dogs’ bodies, resulting in a change of color depending on the dog’s genes.[4]

The genes that interact with eumelanin and phaeomelanin control the intensity of the pigments. They also control where the pigments are produced.[5]

As a result, cells can produce eumelanin and phaeomelanin on different parts of the body. This then results in patches and markings.

An interesting fact about genes is they can cause cells to switch between eumelanin and phaeomelanin. This makes the hair have both red and black pigments.

Why Are Jack Russells White?

The ancestors of Jack Russells were bred for hunting. They had tan or dark brown coats. This made it difficult for hunters to differentiate their dogs from prey. As a result, they crossbreed the dogs until their coats turned mostly white.

The white hair on a Jack Russell’s body completely lacks melanin. The gene responsible for this feature has been perpetuated throughout the breed’s history.

Today, all Jack Russells have white hair on large parts of their bodies.

Jack Russell Terriers are mostly white. Counterintuitively, this is not their base color. The white parts of Jack Russells Terriers’ coats are spots.[6]

Jackies can have a black and brown base. If the white spots cover the majority of the black parts, the dog appears white with brown patches.

Markings on Jack Russell Terriers are categorized according to their colored spots. This is because white is prevalent and doesn’t appear on specific parts of the body.

It is easier for people to distinguish the colored spots, than the white spotting.

Here are the types of Jack Russell Terriers markings:

The tip of the ear or the entire ear can also be covered by the melanistic mask. Sometimes the whole face is dark.

Melanistic masks are determined by eumelanin. Pheomelanin is completely absent on this part of the coat. Jack Russell Terriers don’t have full eumelanin coats. This makes melanistic masks visible.

Eumelanin determines black, dark brown, dark grey, and light grey-brown masks. Jack Russells can only have black and dark brown melanistic masks, due to their genes.

Jack Russells can also have non-melanistic masks. These masks are caused by white patches. Jack Russells can be tan and have white spotting all over their bodies, except for their face. This results in a pigmentation pattern that resembles a face mask.

The colors of non-melanistic face masks indicate the base colors of Jack Russells. They can be black, brown, red, tan, or yellow.

A saddle mark is a large colored patch on a Jack Russell Terrier’s back and sides. The mark gets its same from the resemblance of a saddle.

Saddle-marked Jack Russells usually have black and tan colors. The amount of tan is higher than the amount of black.

Saddle markings are not always visible because of large areas of white spotting. This is why saddle-marked Jackies can appear white with black and brown spots.

Jack Russells can display colored patches over one or both years. They can be of various sizes. The color of the patches is usually black or dark brown. They can also be red or yellow.

Jack Russell tickings are not common. This pattern is determined by a specific gene that creates ticking spots on the white parts of a Jackie’s coat.

The color of the tickings is determined by the base color. Some Jackies develop more tickings as they grow older.

Does The Type of Coat Influence Jack Russells’ Color?

Jack Russells’ coat types only influence the appearance of their color pattern. Some markings, such as tickings, are not visible in long-haired Jack Russells.[8]

The color patterns of Jack Russels are created independently from their coat type.

Their coat color is determined by genetics. Genes determine the color of the pigments, the color intensity, and their placement.

There aren’t two Jack Russells with the same color patterns. Every Jackie is unique.