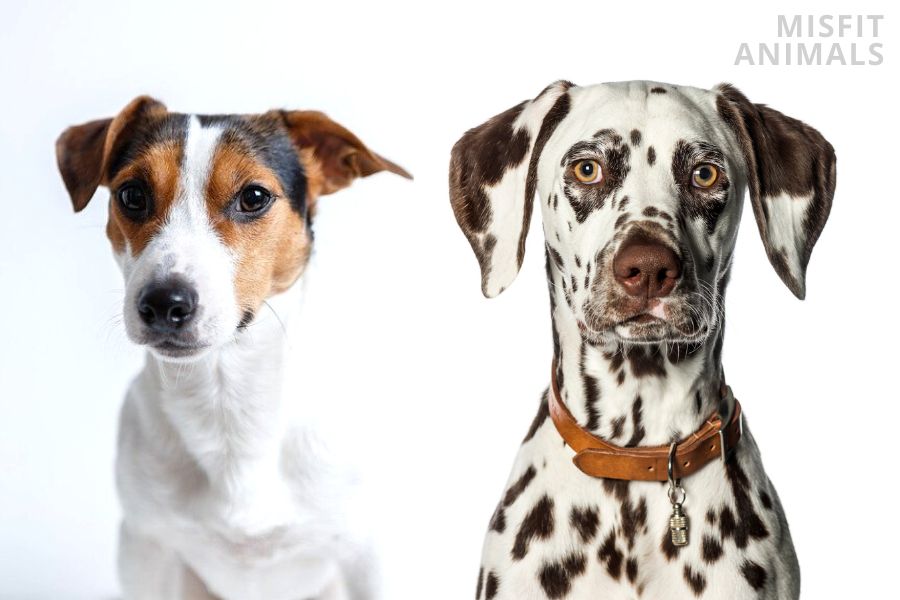 The Jack Russell Dalmatian mix is a crossbreed between a Jack Russell Terrier and a Dalmatian. They inherit traits from both breeds, such as size, coat type, temperament, and behavior habits. They are small or medium and have short or medium coats.

The Jack Russell Dalmatian mix is also called Jackmatian or Dal-Jack, a popular mix because of its unique markings.

Two of the main traits of this breed is high energy and affection. They are friendly, but they need exercise.

If they don’t get to run around, they will act out.

This article explores the temperament of Jackmatians in detail. You will learn out if they are aggressive or protective, their origin, appearance, and health issues.

Dalmatian Jack Russell mix dogs are affectionate and fun to be around. They are playful and active. Dal-Jacks have a highly developed instinctive intelligence which shows in their protective natural behavior.

Jackmatians are small or medium, depending on the breed characteristics they inherit. They are mostly white, with markings. On rare occasions, they are fully white.

This mix can take on many colors:

The main characteristics of Dalmatian Jack Russell mix dogs are listed in the table below.

3 Reasons To Get a Jack Russell Terrier Dalmatian Mix

Jackmatians are great at detecting possible threats. They signal and bark if anything or anyone comes near their territory.

Dal-Jacks are loving and affectionate to people you introduce them to. If you permit a stranger to enter your property, Jackmatians become friendly.

If they detect you are reluctant to strangers, they engage in protective behavior.

Jackmatians are moderate to heavy shedders. Luckily, they have short hair that is easy to manage. Weekly brushing is enough to keep their shedding under control. If you hate having hair all around the house, you can brush your dog daily.

Other than that, Dal-Jacks only needs baths occasionally.

If the mix resembles Dalmatians, they have low amounts of skin oils. This results in reduced odor levels. Cleaning their ears and clipping their nails is occasionally needed.

If you hate drooling dogs, this mix is good for you. Jackmatians don’t leave your home covered in saliva. They are minimal droolers.

3 Reasons Not To Get a Jack Russell Terrier Dalmatian Mix

Jack Russell Terrier Dalmatian mix dogs shed a lot. They have a predisposition to aggression, especially when they feel threatened, and they need a lot of mental stimulation because they are active and intelligent.

1. Dal-Jacks Are Moderate To Heavy Shedders

Jackmatians leave large amounts of hair all over (if they resemble their Jack Russell parent).

Jack Russell Terriers are moderate to heavy shedders because they are double-coated. They shed heavily during spring and autumn but less during summer and winter.

Jackmatians that inherit their coat-type genes from the Dalmatian parent shed all year round.

They shed high amounts of hair because their hair is short. This is why they require daily or weekly brushing.

2. Dal-Jacks Can Become Aggressive Towards Strangers

Dal-Jacks are friendly and affectionate with the people they form strong bonds with. But, they are prone to aggressive behavior when a stranger enters their property.

This depends on whether the strangers have the preliminary permission of their owners. If they do, Jackmatians are friendly.

This mix has a well-developed sense of personal space. Prevent this with early training and socialization. The more dog-human interaction they are exposed to, the lower the chances of aggressive behavior.

Jackmatians are smart and get bored easily. Because they are smart, and because they have high energy levels, they need a lot of stimuli. If not, Dal-Jacks engage in destructive behavior.

This crossbreed is not suited for owners who don’t have time for their dogs. They need a lot of physical exercise and mental stimulation to be happy.

Dalmatian dogs originate from Croatia. Their name comes from the region where they were first bred, called Dalmatia[1]. They were first documented in the 14th century. At the time, they were called Canis Dalmaticus.

Dalmatians were first introduced in England and the U.S. in the 19th century. Some historians report several Egyptian paintings from 2700 BC that illustrate white dogs with black or brown spots.

The Dalmatian became popular worldwide in 1985 when the movie “101 Dalmatians” was released. The number of Dalmatians in the US began to rise shortly after.

Dalmatians are non-sporting dogs. They were bred as working or hunting dogs, but are currently bred for companionship.

The history of Jack Russells began in England in the 1800s[2]. The breed was created by a hunter who needed a small light-colored fox hunting dog. Now they are used as companion dogs, and sometimes for vermin control.

Jack Russell Terriers were initially dark-colored. Many of them got killed because hunters could not differentiate them from their prey.

To prevent this, they were crossbred to be more white.

The American Kennel Club includes Jack Russells in the Parson Russell Terrier category. The breed was officially recognized as a separate breed between 1998 and 2003.

The Jack Russell Dalmatian Mix dog is small or medium-sized. They are mostly white and have markings that resemble both Jackies and Dalmatians. Dal-Jacks have a lean athletic appearance.

The Jack Dalmatian Mix is primarily white, with uni-color markings, or multiple-colored markings. The white marks on Jackmatians are caused by a lack of melanin.

This depends on which parent the Jackmatian resembles.

Jakmatian puppies are sometimes born fully white. As they grow, their markings start to develop until they reach their permanent size and color.[3]

The average height of a Jack Russell Dalmatian mix dog is between 15 and 24 inches. Their weight is proportional to their size, ranging between 18 and 70 pounds. This large range is due to the size difference between Dalmatians and Jack Russells.

Jackmatians are small or medium-sized dogs depending on which parent breed they resemble the most.

It is difficult to predict the appearance of fully-grown mixes when they are puppies. Each individual develops its own characteristics as they grow.

Jack Russell Dalmatian mixes can inherit their coats from either parent breed. They are either single or double-coated. They can’t be both.

This happens only if they are bred from 50% purebreds: one parent is a Jack Russell and the other is a Dalmatian.

Some breeders use crossbreds as parents, which can lead to the perpetuation of only one type of coat.

The types of coats Dal-Jacks can have are detailed below.

Jack Russells are double-coated. They have undercoats that keep them warm during the winter and an outer coat that protects them from UV rays and keeps them cool.

Jackies can have three types of coats:

Dalmatians are single-coated. Their coats are short, straight, and smooth. Dalmatians do occasionally give birth to long-haired puppies.

Long-haired Dalmatians are not accepted in breed competitions.

The hair of Dalmatians lies close to their bodies. This makes their muscles visible, resulting in an athletic appearance.

Dalmatian Jack Russell Terrier mixes are energetic, intelligent, and easy to train. They are also affectionate and enjoy the company of their owners. As great watchdogs, because of a well-developed protective instinct, they take care of their family.

Both Jack Russells and Dalmatians are above average in terms of intelligence. Both breeds were also used for hunting.

As a result, Jackmatians have a well-developed instinctive intelligence.

Yes and no. Both Jack Russells and Dalmatians can become aggressive, but only if mistreated or threatened. Their mixed offspring has the same tendencies.

Aggressive behavior occurs more often when dogs are scared and is more frequent in older dogs. Males are also more aggressive than females.

Small-sized Dal-Jacks have higher chances of displaying aggression than medium-sized ones. This is showcased by a study[4] that analyzed what factors affect aggression in dogs.

Dal-Jacks’ aggressiveness can be prevented by early socialization. Training during puppyhood also reduces the chances for aggressive behavior.

Dalmatians were used as guard dogs in the 18th century. They used to walk alongside carriages to protect the travellers from burglars. In their book “Traditional varieties and breeds of Dalmatia”[5], the authors state that Dalmatians were used for protecting Dalmatia’s borders.

Dalmatian Jack Russell mixes bark and can become aggressive to intruders. They are kind and accepting of their owners but have a strong guarding instinct. They will not let strangers trespass their territory unless their owners accept them.

Dalmatian Jack Russell mixes are healthy with a long life expectancy. The average lifespan of crossbreeds is 13.1 years[6]. Considering that Jack Russell Terriers are the longest-living pet dogs[7], the lifespan of DalJacks is on the shorter side.

Like all other dogs, this mixed breed is predisposed to a series of health issues.

The Health Issues Jackmatians have a predisposition for are as follows:

Dal-Jacks are predisposed to fewer genetic diseases. This happens because Jack Russells and Dalmatians do not have many recessive diseases in common. A recessive disease is a health condition that requires both parents to pass on the gene for it to manifest.

How Much Does a Dalmatian Jack Russell Puppy Cost?

A Dalmatian Jack Russell puppy costs between $680 and $4600. They are rather expensive considering they are crossbreds. The most expensive Jackmatians come from pure breeds.

Make sure to check the origin of a Jackmatian puppy before buying them. Some breeders do not breed dogs from pure breeds. They use Jackmatians as parents instead of Jack Russells and Dalmatians.

The Jack Russell Dalmatian mix is an active crossbreed that needs a lot of mental stimulation. They love spending their time outside, but they adapt well to apartment living. If you decide to get a Jackmatian, make sure to engage them in daily physical activity.

Dal-Jacks are healthy dogs that have a long lifespan. They form strong bonds with their family members but don’t like strangers. With early socialization and training, most of their behavior issues can be prevented.