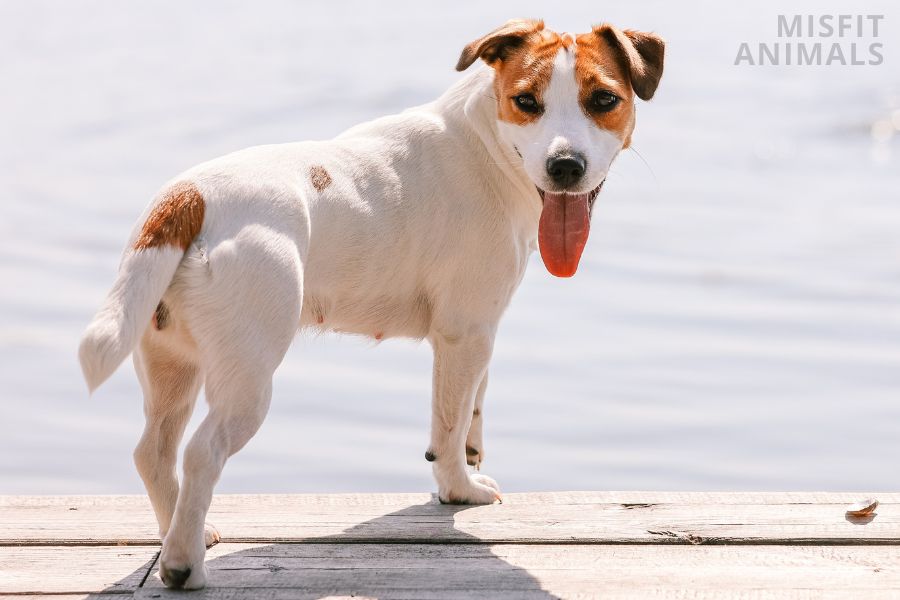 The main Jack Russell behavior issues are aggression, barking, hyperactivity, and biting. They engage in destructive behaviors if they are bored. Behavior issues are caused by genes and lack of exercise. Other possible causes are diet and certain medical conditions.

Jack Russells are lively dogs. They have a lot of energy due to their hunter heritage. This also means that they turn aggressive and hyperactive if improperly handled.

Their high-energy nature also reflects itself in frequent barking, biting, destructive behavior, and jumping on visitors.

In this article, you will learn what’s behind Jack Russell Terriers’ behavior issues, whether they are aggressive dogs, and how to calm them down.

This article also details how to stop these unwanted behaviors.

What Are Behavior Issues in Jack Russells?

A behavior issue in Jack Russells is any type of unwanted behavior. Behavior that is dangerous to other dogs or the dog itself is also problematic behavior.

Examples of behavior issues in dogs:

Dog owners are subjective when identifying dog behavior problems, as most people see issues according to their own views. But what makes a behavior an issue is that it declines the dog’s well-being.

A study[1] from 2019 reveals what behavior dog owners find most annoying.

The behavior of Jack Russell Terriers is not always specific to their breed. Their behavior is also influenced by the situation, their history, and their personality.

Jack Russells have the potential of becoming aggressive. Addressing this issue is essential. Aggressive dogs are often abandoned or euthanized.

Understanding aggression in Jack Russells is the best way to prevent or treat it. Jack Russell puppy biting is a sign of early aggression and needs to be addressed as soon as possible.

The following table details the types of aggression that Jack Russells engage in.[3]

What Not To Do When Your Jack Russell Is Aggressive

Avoid doing the following while interacting with an aggressive Jack Russell:

Yes, Jack Russells bark a lot. They are a hunting breed and have developed the habit of barking to announce prey, strangers, or intruders.

Jack Russells bark to communicate their internal feelings. These feelings include fear, loneliness, need for attention, and excitement. They also bark because of specific health issues, such as pain, canine senility, or bee stings.

When they are left alone, they develop separation anxiety, which also triggers barking.

Jack Russells bark when something changes in their environment. By barking, they signal their territory is in danger. They also bark if they have identified an external threat.

Related: Why Is My Jack Russell Barking

How to Stop Jack Russells From Barking

Try the following techniques to stop your Jack Russell’s barking:

What Not To Do When Your Jack Russell Is Barking

If your Jack Russell barks, avoid punishing them for their behavior. Try positive reinforcement if they engage in different behaviors when they are triggered.

Yes, Jack Russell Terriers are hyperactive. They are a high-energy breed, as they were originally bred to be hunting dogs. They need to engage in a lot of physical activity every day.[5]

Jack Russells are energetic dogs that need a lot of movement and mental stimulation. When they are not active and spend a lot of time alone, Jackies can become hyperactive.

Hyper behavior is characterized by:

Hyperactivity in Jack Russells can be exacerbated by a lack of early socialization. This leads to attention-seeking behavior, aggressiveness, and poor social skills.

How to Stop Hyperactivity in Jack Russell Terriers

Here’s how to diminish your Jack Russells hyperactivity:

What Not To Do About Hyperactivity

Don’t punish your Jack Russell for being hyperactive. They have to take out their energy. They will engage in destructive behavior if other forms of expression are forbidden.

Yes, Jack Russells bite and nip when they are puppies. They can turn into aggressive adults if this behavior is not controlled.

Allowing your Jack Russell puppy to nip on your clothes teaches them that this behavior is acceptable.

How to Stop Jack Russell Terriers from Biting

Use timeouts as a correction method to stop your Jack Russell puppy from biting. Offer alternatives to chew on, such as toys. This will reduce unwanted biting when they are adults.

What Not To Do

Do not allow puppies to bite you because they will never stop. A Jack Russell bite can cause severe damage and is harder to unteach in adulthood.

The main causes of Jack Russell behavior problems are:

Jack Russell Terriers were bred for hunting for more than 200 years. They have innate hunting abilities. These abilities predispose them to excessive barking, digging, and aggressiveness.

Remember that genes only predispose. While Jack Russells are predisposed to some behavioral issues, their behavior is largely dictated by their upbringing.

Training and a loving environment can significantly reduce the chances of behavioral problems.

Jack Russell Terrierrs’ behavior is influenced by their diet. An imbalance in nutrient intake ledas to health conditions that alter behavior.

Dogs’ microbiomes are highly influenced by what they eat. Studies links the composition of dogs’ gut microbiome to aggressive behavior.[6]

Replacing protein with carbs can lead to aggression and mood swings. Additives and other chemicals in dog food can cause allergic reactions. Allergies increase inflammation levels and psychological stress in dogs. This affects their behavior.[7]

Jack Russells are active dogs. They need a lot of exercise to release their energy. Low levels of physical activity leads to hyperactivity and frustration. This causes destructive behavior, whining and barking.

Jack Russell Terriers’ behavior are influenced by certain health issues. These issues change how their internal organs and systems work.[8]

Health conditions that impair behavior, such as a broken leg, or wearing a recovery dog cone, can make Jack Russells aggressive.

Congenital deafness affects pure breed Jack Russels. This disease changes how Jack Russells perceive their environment. Like blindness, it can lead to fear and aggressiveness.

Hormonal issues, such as Hypothyroidism, change internal processes related to behavior. They can lead to several behavior issues in Jack Russell Terriers. A study from 2008 found a high correlation between hypothyroidism and dog aggressive behavior. [9]

Jack Russell Terriers are predisposed to Legg-Calve-Perthes Disease. It causes the deterioration of the dog’s femur’s head.

Jack Russells are susceptible to Cushing’s disease. Symptoms of Cushing’s include behavioral changes in dogs, such as aggression.

How To Calm a Jack Russell Terrier

Calm a Jack Russell Terrier by taking them for daily walks, playing games with them, and taking them on playdates.

These activities keep Jackie Russells calm. They are less likely to develop behavior issues such as aggression and destructive behavior when exercised daily.

Apply the ‘Calm Hold’ technique when your dog is agitated by placing your palm on their shoulder. Tell them to relax in a calm voice. Avoid making contact so they don’t feel threatened.

Jack Russells are great loyal companions. They are predisposed to certain behavior problems, such as aggression and hyperactivity. These problems are relatively easy to control. You need to provide enough exercise, discipline, training, and take your dog on playdates.

Jack Russells are predisposed to certain behavioral issues. This does not mean that your dog will engage in all of them. Prevention is the key to every situation. Keeping your dog happy and well-behaved should become a priority.