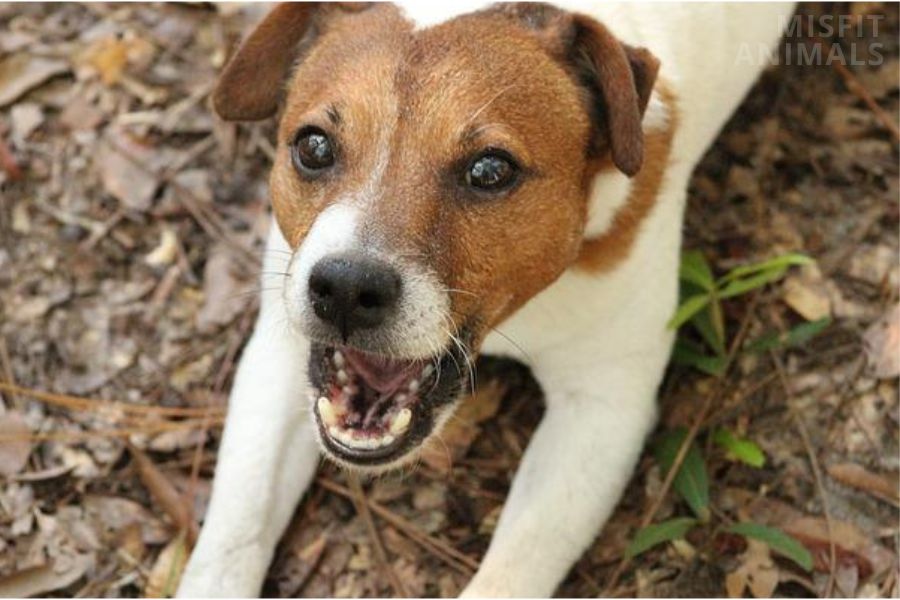 Jack Russells bark to communicate their internal states, information about their environment, and because of various health conditions that cause discomfort. To stop your Jack Russell from barking, train your dog the ‘Quiet!’ command and learn how to react to discourage the behavior. Using bark collars is also an option.

Jack Russell Terriers are active dogs that love to bark. This behavior is controllable if you manage to understand it.

Learning what your dog is trying to tell you is essential to stop the behavior. Being able to differentiate between various types of barking also helps.

Yes, Jack Russells bark a lot. Humans bred Jack Russells to hunt, teaching them to instinctively bark in certain situations. This includes barking to protect territory, their owner, or when they detect a threat.

With a 200 years-long history of hunting, Jack Russell Terriers inherit their love of barking from their ancestors. As hunting dogs, this habit was a part of their job.

Why Do Jack Russells Bark?

1. To Communicate Their Internal States

Barking is a means of communication specific to domesticated dogs. This includes Jack Russells. They have developed this skill to communicate their internal states to humans and other dogs.[1]

Here are some of the internal states Jack Russells try to communicate:

Jack Russells bark at things or people they are scared of in an attempt to intimidate them.

Jack Russell Terriers get tense due to separation anxiety. This can trigger barking.[3]

Jack Russells are active dogs who need interaction with their companions. If you don’t spend enough time with your dog, they can engage in barking as attention-seeking behavior.[4]

Barking Out of Loneliness and Boredom

Jack Russell Terriers have a long history of fox hunting in packs. Constant activity and interaction with other dogs are part of their nature.

They form a strong bond with their owners. When left alone for long periods, a Jack Russell barks to release energy.

Jack Russells use barking as a greeting or to tell humans or other dogs they want to play. This breed is highly energetic and finds it difficult to withhold emotion. They bark when they are happy and full of positive emotions.

2. To Communicate Information About Their External Environment

Jack Russells use barking to send information about their external environment, such as that their territory is in danger, or an external threat is present.

Their Territory Is in Danger

Despite their small size, Jack Russell Terriers are among the most territorial breeds. They make good guard dogs because they pay close attention to their surroundings.

By barking, Jack Russells let potential intruders know the territory belongs to them. they also bark to alert the owner or other dogs of the presence of an intruder.

Territorial behavior can be triggered by anticipation and fear. As a reaction, dogs have a strong response that can not be interrupted by yelling. For this reason, your Jack Russell is not always responding to your punitive reaction.

An External Threat Is Present

Jack Russells are fearless. As prominent hunting dogs throughout history, they have evolved to pay attention to their surroundings. They bark when they identify a possible external threat to let others know about it.

Besides being fearless, Jack Russell terriers are protective of their loved ones. They bark if they are threatened by another person or animal.

3. Because of Various Health Issues

If your Jack Russell keeps barking for no apparent reason, take them to a veterinarian to make sure it is healthy.

How Jack Russells Bark and What It Means

Jack Russell Terriers bark in different ways, depending on the information they want to communicate. Barks have different patterns of acoustic structure, such as pitch, repetition, and harmonics. these patterns differ according to the context. [5]

Dogs have the same language regardless of the breed and they can recognize the signals they give each other. You can understand why your Jack Russell is barking by paying close attention to the pattern.

If you manage to understand what your Jack Russell is trying to tell you, you can stop them quicker.

Jack Russells’ barking is defined by duration, frequency, and pitch:

The duration offers information on mental stability. This indicates whether they perceive a situation as hostile or non-hostile.

The most common types of Jack Russell barks are:

Uninterrupted fast and high-pitched barking indicates your Jack Russell is trying to warn you about the presence of a potential threat.

Continuous barking with pauses indicates loneliness or separation anxiety. This type of bark can be used when you are leaving the house.

Single or rapid high-pitched barking indicates pain. If this happens, make sure to identify the problem and take the necessary steps to keep them safe.

Barking With a Rising Pitch

This type of barking starts at a low pitch and rises progressively. Jack Russells bark like this to show joy and excitement.

Hesitant Bark at an Average Pitch

Your Jack Russell is happy and willing to play when they bark like this. If this is accompanied by tail wagging, they are energetic and want to engage in activities.

How To Stop Your Jack Russell From Barking

The next table will help you identify and understand the cause of the barking, as well as how to stop it.

To stop your Jack Russell from barking, teach it the the “Quiet” or “Stop” command. You should also learn how to react when it’s barking at other people, animals, or when the doorbell rings.

While training your Jack Russell not to bark, try to avoid yelling. Yelling is the same as barking, which will make them want to join in. This will result in more barking.

Avoid punishing your Jack Russell for barking. Teach it to engage in alternative behaviors instead. Then, reward these behaviors.

Teach your family how to react to specific types of barking. This provides consistency and avoids confusing your dog.

It is essential to address the cause and not the behavior to stop your Jack Russell from barking.

Depending on the cause, you can react in the following ways:

Ignore Your Jack Russell When It Is Barking

ignoring your dog is needed if they are seeking attention. If you identify this as their motive for barking, do not respond in any way. With time, it will understand that barking won’t get your attention.

Dogs repeat reworded behavior. To stop them from barking in a certain situation, make sure to remove their motivation.

For example, if your dog barks every time it wants to play with you, don’t engage with it until it has stopped barking.

Desensitizing in dogs works the same as in humans. By exposing your Jack Russell to a stimulus, such as seeing other dogs on the street, you will get them to calm down. The key is to act calm and distract their attention when stimuli occur.

Engaging the Dog in an Activity Incompatible With Barking

Actions incompatible with barking are eating or holding something in their mouth. By training your dog to keep a toy in their mouth when a friend comes by, they will stop barking.

Train Your Jack Russell to Stop Barking on Command

The ‘Quiet!’ command will let your dog know you want them to stop barking. It can be used in the majority of situations.

When your dog stops barking, give it a treat to praise the behavior.

Repeat the process every time barking occurs, but say the ‘Quiet!’ command and place a treat in front of their mouth first. This makes it difficult for your dog to bark, as they are busy eating.

A bark collar can be useful if nothing else works. Bark collars spray the dog with a harmless substance when it starts barking. It can also make noises that make dogs uncomfortable. This teaches your dog not to bark.

These collars can’t differentiate between happy and sad barking and can inhibit your dog’s positive emotions.

How to Prevent Barking

To prevent your Jack Russell from barking, make sure they engage in physical activity during the day. Reduce separation anxiety by petting your dog before leaving the house.

Keeping your dog tired reduces their anxiety levels and prevents them from barking. If you are gone for a prolonged period, pet them before you leave the house and have a friend or family member visit them.

When Do Jack Russells Learn to Bark?

Jack Russells start to bark around the age of 7 or 8 weeks old. Some dogs learn how to bark later on and can go up to 4 months without barking.

Around 2 to 3 weeks old, Jack Russell puppies begin using their vocal cords and having vocalizations. These vocalizations consist of whines and grunts.

Despite the breed characteristics, each dog has a personal temperament, making them less or more communicative. This can influence when they learn how to bark.

Yes, Jack Russells are loud. They are known as one of the loudest small breeds.

While hunting, Jack Russells had to let the hunters know when they found prey. As they were used for small, burrowing prey, Jackie’s needed a loud bark so their owner could find them and take them out of burrows.

The loudness of their bark evolved as a survival mechanism because. If their owners failed to find them, they would die.

Jack Russell terriers bark a lot. You can stop this by identifying the reasons why your Jack Russell barks and applying a few training methods. Remember that some barks are happy and are a means to communicate happy emotions.