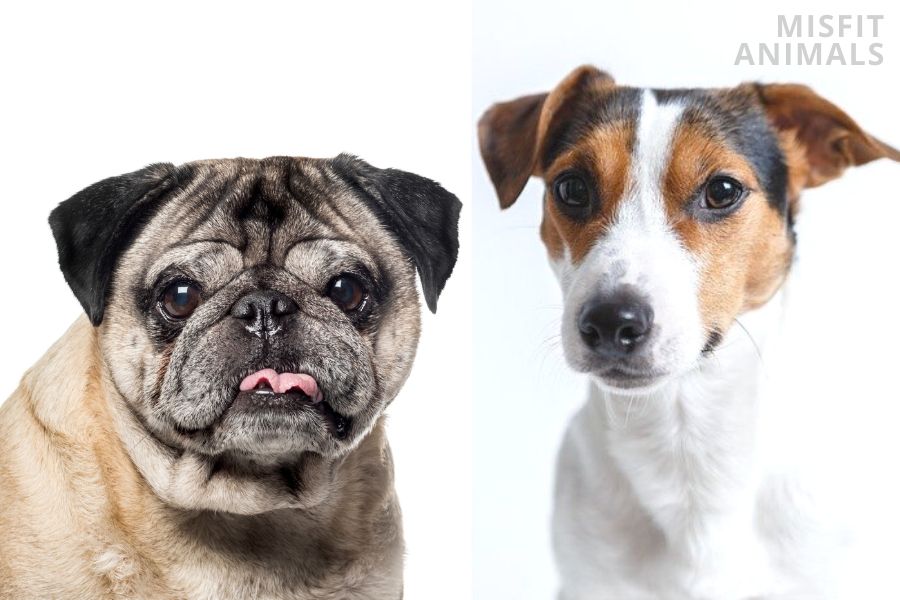 Jack Russell Pug Mix dogs are a crossbreed between Pugs and Jack Russell Terriers. They are a part of a type of breed called “designer breeds”. This means they get the best characteristics from each parent breed.

Pug Jack Russell mixes are intelligent and loving dogs, with the happiness of pugs and energy of Jack Russells.

They are healthy, live long lives, and form strong bonds with their family. They are protective of them and can become aggressive if something threatens their family.

You will learn facts about their origin, temperament, health issues, and appearance.

Jack Russell Pug mixes are small dogs. They have short muscles and curly tails. Their genetics determines their color, which can be black, brown, or tan, with and without white spots.

Jugs can take on a variety of colors, markings, spots, and patterns. They can also display dark face masks.

Their characteristics can not be predicted with 100% accuracy. They inherit traits from both parent breeds.

Some breeders use purebreds as parents and combine Jack Russells with Pugs every time. Others combine crossbreds.

The main Jack Russell Pug mix characteristics are listed in the table below.

What Is a Pug and a Jack Russell Mix Called?

The Jack Russell Pug mixed-breed is recognized by three associations:

All these associations refer to Jack Russell Pug mixes as Jugs, making it the official name.

3 Reasons To Get a Pug Jack Russell Mix

Pug Jack Russell mixes are short-coated and are easy to groom. Daily brushing is enough to keep your Jug’s coat healthy, but they need regular baths. You will not need a wide variety of tools to groom your Jug.

Jugs are affectionate because they resemble Pugs. Pugs form strong bonds with their families and they like to display affection. If they are introduced to children at a young age, they are great with children.

Jack Russell Pug mixes have an average lifespan of 14 years. If you get a Jug, you will have a great companion for a long time. They are also healthier than Pugs.

3 Reasons Not To Get a Jack Russell Terrier Pug Mix

Jack Russell Pug mixes are medium to heavy shedders. They have short double coats. Jack Russells shed heavier during spring and autumn. Pugs shed all year long. The jug can inherit one of these traits.

Jugs inherit their hunting instinct from Jack Russells. They love to chase small animals. This is a problem if you already have other small pets. It is also dangerous to Jugs, as they can run in the street chasing small prey and get injured.

Jack Pugs are crossbreeds, and crossbreds are less likely to develop the genetic issues that their parent breeds are prone to.[1]  They are healthy dogs but have a predisposition to skin disorders.

They require higher efforts on your part to keep their skin clean and healthy.

Jack Russell Pug mix dogs seem to have appeared in the 1960s. They made their way to the United States in 2003.

The true story of this crossbreed is unknown, but we do know that Jack Russells have been around since the 1800s, and Pugs date back to 400 B.C.

Jack Russell Terriers were initially bred in the United Kingdom and dates back to the 1800s. The initial purpose of Jack Russells was to hunt foxes, but it evolved to hunt small prey. Jack Russells are now used as companion dogs and for vermin control.

Jack Russell Terriers are not recognized by the American Kennel Club. The breed gained its recognition in 1998. This lasted until 2003.

Pugs originated in ancient China. They were Royal dogs, highly appreciated by Chinese emperors[4]. They were imported to Europe in the 16th century[3]. They first arrived in the U.S. in the 19th century. Pugs were recognized by the American Kennel Club in 1885.

Pugs have been popular in royal families for hundreds of years. Both Queen Victoria and King George V were fond of pugs. They were even painted by several famous artists, such as Goya.

They were bred as companion dogs and had a different appearance back then compared to the present day.

The appearance of a Jug dog is relative. They are small-sized and display facial folds. Their muzzles are short, but not as short as Pugs’. They can be of various colors, such as black, brown, fawn, caramel, tan, cream, and silver.

Pug Jack Russell mixes come in many colors. They can also have white spots, though the chances are low because Pugs don’t carry the genes for white spotting.

Jug dogs’ coats are short and smooth. Crossbreds with a rough-coated Jack Russell parent can have broken coats.

The majority of Jack Russell Pug mixes are similar to Pugs. It is sometimes hard to tell the difference between them. The main difference is the length of their muzzle.

Jugs often have a dark face mask as both Pugs and Jack Russells carry the genes for this marking[5]. This feature is called a melanistic mask.

How Big Do Jack Russell Pug Mixes Get?

Jack Russell Pug mixes measure 10 to 14 inches in height. They are relatively small. Their muscles are also short. They weigh between 12 and 18 pounds.

Jugs are sometimes referred to as toy dogs because some of them are small. This makes them suited for small houses or apartments.

Jack Russel and Pug mix dogs are energetic and playful. They are intelligent and easy to train. Jug dogs are a combination of a highly active breed and a calm one. They can inherit traits from both of them. These dogs are great for active people.

They can become aggressive if they are not socialized early.

This table illustrates the main traits that Jugs can display in connection to their parent breeds.

Jack Russells were bred for hunting. If Jug dogs resemble Jack Russells, they are eager to please and have a lot of energy.

They also have great stamina. This makes them skilled runners and swimmers. Jugs can inherit sharp smelling and tracking abilities from Jack Russells.

Jack Russells can become aggressive if they are not socialized early, but this does not mean Jugs are aggressive. They have a predisposition for aggression which can be controlled with training.

Jackies are highly energetic dogs. They need high amounts of physical activity to keep their temper at bay. Jugs are also active dogs. They enjoy daily walks and playdates.

Pugs were bred as companion dogs. This makes them loving and relatively calm. Pugs are easy to train[6], a trait that Jugs inherit.

This places Jugs somewhere above average when it comes to energy levels.

Yes, Jugs are great family dogs, a trait they inherit from both parents. They are affectionate and playful. If properly socialized, Jug dogs are great around children.

If a Jug dog resembles their Jack Russell parent more, they need an active family. People who are sedentary do not make great owners for these dogs.

Jack Russell Pug mixes are generally healthy dogs. But, they are still predisposed to several health issues. The breed’s initial purpose was to reduce the number of health issues specific to Pugs.

There are lower chances of developing recessive diseases as these need both parents to be gene carriers.

Jack Russell pug mix dogs were bred to reduce some health issues that Pugs are prone to. Pugs are predisposed to several health problems due to their anatomy[7]. They are less healthy than many breeds.

Because of their anatomy, Pugs are prone to:[8]

Jugs can inherit a predisposition to these diseases depending on how much they resemble Pugs. If they get their muzzle shape from pugs, they are less healthy.

Jack Russells are healthy dogs but have a predisposition to certain diseases. Some of them are genetic, others are not.

Certain genetic diseases in Jack Russells need both parents to carry the gene. This makes crossbreds less prone to these health issues.

Patellar luxation is common to both Jack Russels and Pugs. This makes Jugs prone to this issue.

Patellar luxation is a dislocation of the knee. It is common in many dogs[11]. Jug Puppies can have it also. Surgery can treat the problem.

What Is the Lifespan of a Jack Russell Pug?

Jack Russell Pug mixes live for 14 years. They can live longer, as the oldest Jug dog died at 20.

Jack Russells have the longest average lifespan among pet dogs[12]. The oldest Jack Russell was Willie. Eillie lived to be 20 years old and 106 days.

The oldest pug that ever lived was Snookie. Snookie managed to live 27 years.

How Much Do Jug Dogs Eat?

Jug dogs need a moderate amount of both dry and wet food. Split their daily amount of food into at least two meals. Adult Jug dogs need around 1 to 1.5 cups of food per day.

If your Jug inherits its energy levels from the Jack Russell parent, it needs a lot of food. This is why spreading their daily food amount into smaller meals during the day is essential.

Yes, Jugs do shed, a trait they inherit from both parents. Jugs need daily brushing and regular bathing. This will keep hair off of your furniture.

Rare baths are recommended to reduce excessive shedding. The problem is Jugs are prone to skin infections. This is why you need to bathe them regularly but not too often.

Too much bathing can lead to dryness. This results in excessive shedding and skin issues. A reduced number of baths can lead to skin infections. A balance is required when it comes to bathing.

Jack Russell Pug mixes inherit traits from both Jack Russell terriers and Pugs. Both breeds have a long history and have specific traits. The combination of these traits makes Jugs intelligent and agile. They are affectionate and vigilant at the same time.

Make sure to maintain an active lifestyle if you buy a Jug dog. They need moderate amounts of physical activity. They easily adjust to apartment living if you don’t skip their daily walks.

Jack Russell Terrier Pug dogs are fun to be around and make great family dogs.