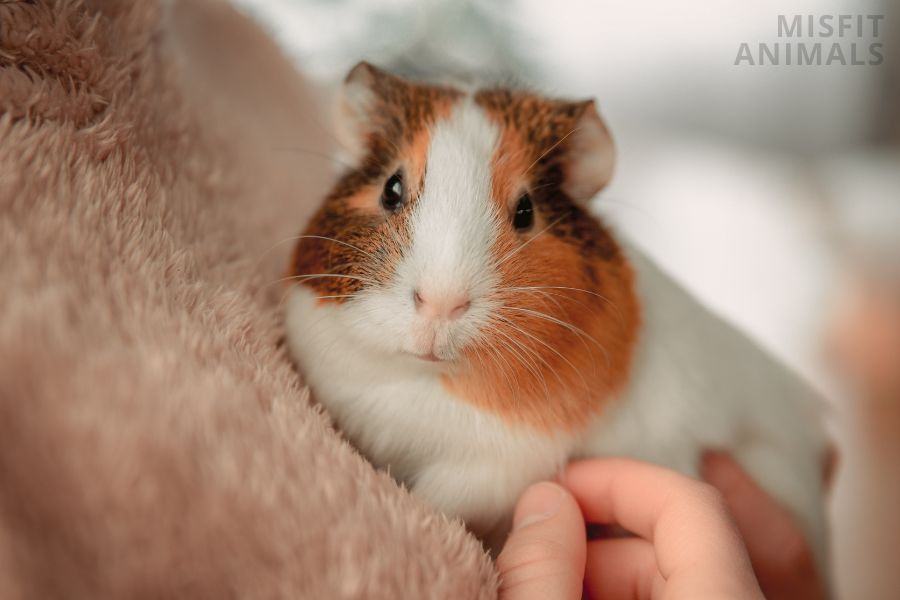 Rodents are either loved or despised by people. There is no middle ground.

Many people around the world keep rodents as pets. Chinchillas and guinea pigs are two such rodents.

These small creatures are cute, and they love cuddling. But they are often confused by each other. This makes it difficult to choose one.

This article gives a comparison between chinchillas and guinea pigs to help you make a better decision when buying your next pet.

Chinchilla vs. Guinea Pig: What Is the Difference?

Chinchillas and guinea pigs are furry rodents kept as pets. While similar in many areas, they are also different in many of their characteristics, such as lifespan, grooming, personality, and trainability.

There is no definitive answer to whether chinchillas are better than guinea pigs or vice versa. These rodents are different from one another, and comparing them is not an easy task.

There are several differences between chinchillas and guinea pigs. Knowing these differences can help you make a better decision when choosing your pocket pet.

Chinchillas are small rodents originating in the Andes mountains of South America[1]. They are nocturnal and remain active from dusk till dawn. Chinchillas require a quiet place to rest during the day.

They eat whatever they can find and require a consistent watch to ensure they do not eat anything unhealthy.

Chinchillas can live happily alone but are comfortable living in pairs. In the wild, they live in large colonies of up to a hundred chinchillas. This helps them fulfill their social interaction requirements.

Pet chinchillas need a lot of interaction to remain happy and healthy. Early training helps chinchillas get used to the human touch and become comfortable around their owners.

What Are Guinea Pigs?

The guinea pig is one of the most popular rodents in the world. They are known for their friendly nature and low-maintenance needs. They are easy to care for and only bite under duress. Guinea pigs get along nicely with other rodents and animals belonging to the prey category.

Guinea pigs are not nocturnal and are most active from dawn to dusk[2]. They don’t have scheduled sleeping times. These small rodents can be goofballs making them look adorable.

Guinea pigs also are used in laboratories so often that the phrase “being a guinea pig” translates to being a part of medical research.

Wild guinea pigs are called cavies and are one of 14 species in this category. Their families can have as many as 10 members.

These rodents are excellent burrowers. They often build a series of inter-connected underground nests to store food and have shelter from predators.

Comparing chinchillas and guinea pigs is equivalent to comparing oranges with apples. They are different but share some similarities. Both animals need hay and pellets in their daily diet to remain healthy.

As it is evident from the chart, chinchillas and guinea pigs are different animals with varied characteristics. Their differences and similarities are covered in detail below.

Guinea pigs are affectionate animals with happy personalities. They love interacting with other guinea pigs or with humans. Guinea pigs are not aggressive but can become wary when threatened.

They are active and love playing, which is why letting them out of the cage occasionally is important to their health. They are comfortable living alone but enjoy the company of another guinea pig.

Chinchillas are different from guinea pigs when it comes to personality. They are curious and active during the night, in contrast to guinea pigs. These rodents enjoy being held and gently patted. Chinchillas do not actively seek human interaction.

Guinea pigs need a proper bath every once a month. They require shampoos made specifically for rodents to wash their fur. Human shampoos can make your guinea pig develop dry skin and loss of hair. Regular nail trimming is also necessary to reduce the chances of self-injury.

Guinea pigs require a diet containing several fresh fruits and vegetables and grasses such as alfalfa[3]. Guinea pigs stop eating when they are full, so you don’t have to worry about your guinea pig overeating.

Chinchillas need a large cage. They are curious creatures and explore all areas of the cage during the night. Their fur is thick and fluffy, which helps keep them warm in the cold environments of the Andes mountains.

This fur can make your chinchilla overheat during hot summer days, and proper care is required to regulate its body temperature. Chinchillas also need several other things:

Chinchillas take dust baths instead of using water. This is because chinchillas have thick fur, which is a nuisance to dry if it gets wet. Wet fur makes it difficult for chinchillas to heat themselves, leading to a drop in body temperature.

Dust baths help remove excess water from the fur and distribute the essential oils evenly throughout the body. Chinchillas can eat fresh fruits and vegetables such as papaya and carrots.

Guinea pigs are smart and learn quickly. Training your guinea pig is easy compared to a chinchilla. They can learn to respond to their names, stand, sit, or jump through hoops.

Use treats to make the training of guinea pigs easier.

Training a chinchilla is more challenging compared to a guinea pig. They can be trained to respond to their name and do basic tricks. You can also litter-train your chinchilla to always keep the cage tidy.

Earning your chinchilla’s trust is important to train it. It can take several weeks to train them properly. All in all, chinchillas are highly intelligent though.

Guinea pigs can be kept as pets by children, adults, or entire households. They are easy to care for and do not require much attention.

Their fun, loving nature and interactive personality make them great companions for anyone.

Chinchillas are also great pets and are compatible with everyone. They should mostly be kept in pairs to avoid the extra interaction time and to keep it company.

Their soft fur and affectionate personality make them a great addition to your home.

Pros of a Chinchilla

There are many pros to having a chinchilla as your pet:

Related: Are Chinchillas Easy to Care For?

Cons of a Chinchilla

While having adorable chinchillas as pets is a great option, there are certain things that make it difficult to care for them.

Drawbacks of having a chinchilla:

Pros of a Guinea Pig

Guinea pigs are cuddly rodents that are a great addition to any household. There are several pros of having a guinea pig:

Cons of a Guinea Pig

Unfortunately, there are certain cons to keeping guinea pigs as pets:

Can Chinchillas and Guinea Pigs Live Together?

Chinchillas and guinea pigs kept in separate cages can live together with ease.

Keeping chinchillas and guinea pigs in the same cage is not a good idea. Chinchillas are likely to get aggressive if other animals enter their cages.

If both these animals were raised together, they can live in the same cage. Ensure that they do not hurt each other or become hostile.

Chinchillas and guinea pigs are both adorable rodents. Both have several similarities and differences, making it difficult to identify the winner of this comparison.

If you want a companion that is more likely to live longer but is difficult to train, getting a chinchilla can be a great idea.

If you are more concerned about the trainability and the cost, guinea pigs are the right choice.

It all comes down to your preference and requirements.

Do Chinchillas Get Along with Guinea Pigs?

Are Chinchillas Smarter Than Guinea Pigs?