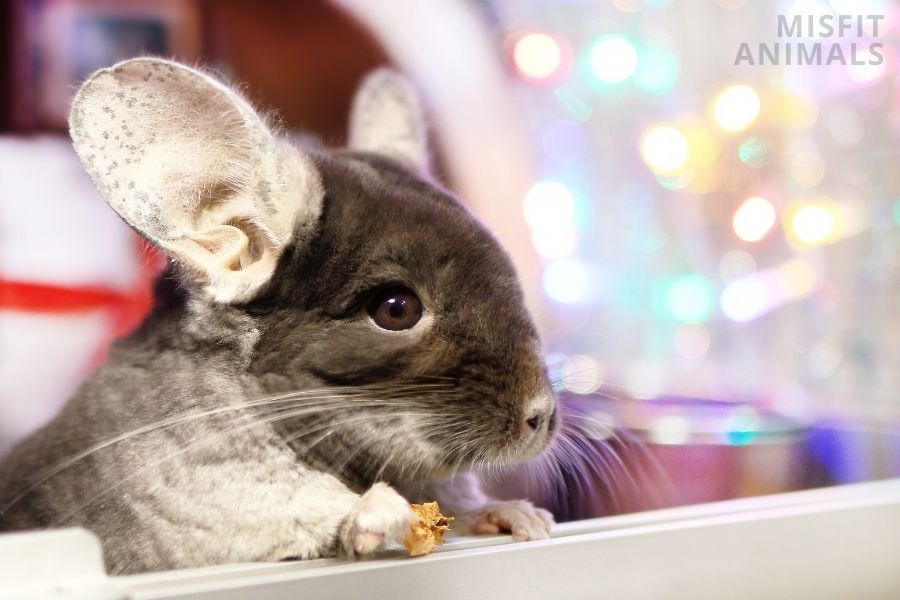 Chinchillas are exceptionally smart for rodents. They can recognize their name and follow basic commands. Chinchillas can also be trained to use the litter box.

Rodents are not considered a smart group of animals. Only a few of them have demonstrated capabilities of intelligence and memory.

Chinchillas are one of these intelligent species.

While they’re smarter than other rodents, they’re not as smart as dogs and cats. Dogs have larger and more evolved brains, resulting in a higher intelligence than rodents.

Despite having small brains, chinchillas are exceptionally intelligent animals. With their intelligence and long life of 10 to 15 years, chinchillas make excellent pets for families of all ages.

This article talks about the intelligence of chinchillas and how you can teach simple commands.

How Smart Are Chinchillas?

Chinchillas are highly intelligent animals. They can respond to basic commands and identify their owners. They are smarter than most rodents but not the most intelligent among all pets.

It is difficult to judge an animal on its intelligence as there is no set standard. Chinchillas are considered smart due to their demonstrated brilliance in recognizing things and having high cognitive functions.

Chinchillas also possess problem-solving skills. This does not mean that they can solve linear algebraic equations, but they can easily learn to overcome obstacles and navigate their surroundings.

Wild chinchillas are constantly at risk of being hunted by predators[1]. Their natural instincts and intelligence help them evade these dangers. Chinchillas are also attentive and notice slight changes in their surroundings.

These rodents are great at social interactions and learn to communicate with their owners quickly.

Do Chinchillas Have a Good Memory?

Yes, chinchillas have a great memory. Intellect and memory go hand in hand. Having an excellent memory helps chinchillas learn from their past mistakes and make changes. It also helps them adapt to new situations.

Chinchillas are quick to learn the faces and the voices of their owners. You can witness this by observing how excited your chinchilla gets when it sees you.

They also memorize their spatial surrounding easily. They can recollect the location of different items in the cage and in the room.

An advantage of their good memory is good hygiene. Chinchillas are extremely hygienic and urinate in the same spot to avoid making the entire cage dirty.

While they have a good memory, they don’t have high adaptive intelligence. This means they don’t respond well to a change in environment.

If you change your chinchilla’s cage or location, it can react stressfully and become visually disturbed. They can quickly learn about the new environment and become comfortable with it, but it can also take a while.

Can Chinchillas Identify Their Owners?

These rodents can easily remember the faces and voices of people who interact with them. Your chinchilla is likely to run to you in case it needs something, as it is familiar with your face.

Chinchillas become excited to see their owners and often start jumping around when their caretaker walks in.

Chinchillas are highly intelligent rodents that rely on their instincts, sight, and smell to analyze their environment. This helps them identify potential dangers.

Some of the most intelligent behaviors exhibited by chinchillas are:

Are Chinchillas Smarter Than Other Rodents?

Yes, chinchillas are smarter than most rodents. Their intellect gives them an advantage over other rodents such as rabbits and hamsters.

There are many rodents in the world[2]. Most of them are capable of being affectionate and loving. Only a few of them have demonstrated intellect, such as chinchillas.

Chins are extremely smart and are among the most intelligent rodents. They are considered smarter than the following rodents:

They are not as smart as cats and dogs, meaning they cannot learn complex commands or perform tricks.

Are Chinchillas Easy to Train?

Yes, chinchillas are easy to train. Training a chinchilla takes time and patience. Within a few weeks, a chinchilla can learn to interact with its owners and form a bond.

You can also train your pet chinchilla to return to its cage when offered a treat. This helps you keep control over your pet and ensure it does not hide in nooks and corners while outside the cage.

Related: Are Chinchillas Easy to Take Care Of?

No, chinchillas cannot learn tricks. They are simple creatures and are not made for complex commands. Teaching your pet chinchilla tricks meant for dogs and cats is not going to reap any rewards.

Chinchillas are intelligent rodents and can learn simple things like their names and the voices of their owners. Their intellect also makes them tidy. They keep their cage cleaner compared to other rodents like mice, rats, and rabbits.

Bond with your chinchilla before making it learn any type of commands. Chins are not particularly fond of being held in their hands, especially by strangers. It can take a while for your pet chinchilla to trust you.

Once your chinchilla is comfortable with you, you can start shoulder-training it.

Use treats to speed up this process. Here are some popular and healthy chinchilla treats:

These treats should not be given frequently, so your chinchilla learns their value of them. Once you find your chinchilla’s favorite treat, you can start training it to climb your body.

Make your chin sit on your shoulder a couple of times till it gets used to it.

Give it a treat every time it successfully stays on your shoulder without trying to get down. With practice, time, and patience, your chinchilla can learn to sit on your shoulder for long periods.

Chinchillas are bright and intelligent animals. They can learn to respond to their names, identify their owners and their voices, and be litter trained.

Chins are generally smarter than most rodents and are great at problem-solving. They cannot do different tricks like dogs and other pets, but they are still capable of doing more than an average rodent.

If you are looking for a pet that is smart and loving, getting a chinchilla can be a great option.

What Tricks Can Chinchillas Do?

Chinchillas cannot do many tricks because they are not intelligent enough. They can learn to climb their owners’ shoulders and sit there until their owner lets them back to their cages.

Can Chinchillas Learn Their Own Names?

Yes, chinchillas have been known to learn their names quickly. With constant interaction, your chinchilla can learn to respond to its name and come running when called.

Can Chinchillas Be Litter Trained?

Yes, chinchillas can be litter trained. Training your chinchilla to use a litter box can be difficult as they are used to using a dedicated part of their cage for their urination and feces. You can also train your chinchilla not to defecate in its dust bath.