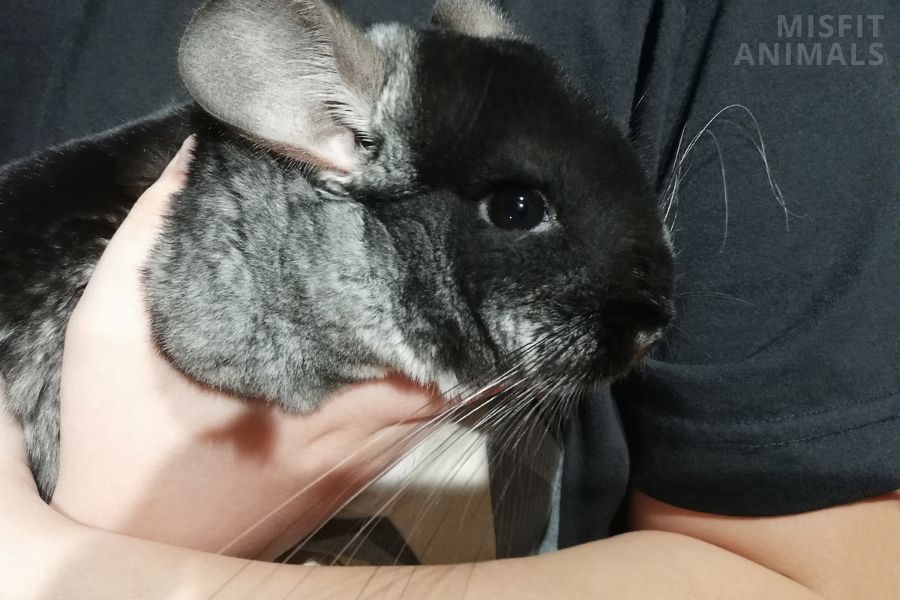 Chinchillas make great pets. They are easy to keep and don’t need much attention. They are smart and affectionate pets that go along well with families. They do have their drawdowns, such as their nocturnal activity pattern and dust bath needs.

Chinchillas are obscure rodents that many people don’t know about. They are unique, easy to keep and don’t need much attention.

They also live comfortably inside a cage.

They do require regular exercise, which can be too much for some pet owners.

If you are looking to buy a chinchilla, you should know whether chinchillas make good pets.

This article discusses the pros and cons of having a chinchilla and details whether chinchillas make good pets.

Yes, chinchillas are good pets that are easy to keep due to their few needs. They are loving, caring, and fun to keep. They sleep during the day, making them ideal pets for busy people.

Chinchillas are highly active and playful. They play in their cage during the night and sleep during the day. They are also relatively quiet compared to other rodents.

Chins do not require complex diets and can live on hay and pellets. They do need regular exercise to remain healthy though.

Most people say that the best thing about having a chinchilla is its smooth fur. Their coat is arguably the softest in the animal kingdom.[1]

Chinchillas live a long life compared to other rodents. They are also extremely clean and low maintenance. Chins do not require much interaction if they are kept in groups.

Chinchillas are easy pets to keep, which makes them ideal for families with young children.

Chinchillas have the longest average lifespan among all rodents. Chinchillas can live anywhere from 9 to 18 years.

The lifespan of a chinchilla depends on many factors:

Shirt-tailed chinchillas can live for up to 20 years with proper care and attention.

The oldest living chinchilla was a pet called Radar. He was 29 years and 229 days old when he took his last breath in California.[2]

Due to their long lifespan, chinchillas make long-term companions, allowing you to form a strong bond with your pet.

Chinchillas are relatively low-maintenance pets and don’t need much cleaning. They dedicate a specific part of their cage as their litterbox and try to keep their bodies as clean as possible.

3. They Are Naturally Clean

Chinchillas are clean by nature and don’t smell much. Their regular dust baths remove any impurities and bacteria from their fur, making it clean and odorless.

All you have to do is provide the needed dust for their baths.

Chinchillas need interaction, but it doesn’t have to be from you. They are easy to keep in groups. As social animals, they do well in the presence of other chinchillas.

If you have multiple chinchillas in your chinchilla cage, you don’t have to worry about regular interaction.

Chinchillas are highly affectionate and loving, but it can take time for your chinchilla to get used to you.

Once your chin becomes comfortable with your touch, you can cuddle with it or hold it in your hand. It’ll be completely calm in your presence.

6. Chinchillas Are Ideal for Busy People

Most people have full-time jobs and are unable to interact with their pets during the day. Chinchillas are good for such busy individuals.

Chinchillas are crepuscular and sleep during the day. They are highly active during dusk and dawn, awake for when you return from work.

If you work during the day, it can be exciting to come and find your pet chinchilla waking up from its nap. You should feed your chin early in the morning and once more when you reach home. They are mostly inactive during the day, so you don’t have to worry about their well-being.

7. Chinchillas Can Be Trained

Unlike some other rodents such as degus and hamsters, chinchillas can be trained to learn simple commands. They are highly intelligent, compared to other animals similar in size.

This does not mean they can do all the tricks dogs and cats can. But they can learn to respond to their name when called.

You can also train your chinchilla not to poop in the dust baths. Chinchillas require a lot of effort and patience to train. Treats help provide motivation and speed up the process.

8. Their Diet Is Cheap

Chinchillas are herbivorous, meaning they eat plants and plant products in their diet. They have sensitive stomachs and need high-fiber foods to remain healthy. Chinchillas must be given hay and chinchilla pellets every day.

Food supplements are not recommended for chinchillas as they can contain sugars and high amounts of fat. These are harmful to chinchillas.

You can give your chinchilla healthy treats such as dried fruits and vegetables occasionally.

Give them treats in moderation. They are not a substitute for hay and pellets.

The most iconic part of a chinchilla is its fur. Chinchillas have one of the softest furs in the world. Their fur density is around 20,000 hairs per centimeter square.[3]

10. They Bathe Themselves in Dust

Chinchillas do not require water baths from their owners. A chinchilla bathes in dust instead of water to avoid wetting its fur, which is a nuisance to dry.

Chinchillas use dust baths to remove dirt on their bodies and distribute bodily oils evenly. Dust baths also help keep your chinchilla’s fur soft and shiny. Chins love bathing in the dust. It is soothing for them and helps reduce possible stress.

11. Chinchillas Get Along With Other Pets

Chinchillas are friendly animals that get along well with other pets.

Predator pet animals such as dogs and cats are not suitable for chinchillas though. This rodent startles easily due to their instincts to avoid predators.

Consider getting another chinchilla or rodent to keep with your chinchilla to keep it company.

6 Reasons Chinchillas Are Not the Right Pet for You

Chinchillas are sensitive to temperature and require specific foods in their diet to remain healthy and active. They are active during the night and make noises that can disturb your sleep.

Chinchillas are great pets, but every pet has its downsides. The same goes for chinchillas.

Here are six reasons why chinchillas are not the right pet for you.

Chinchillas have dense fur, which helps keep their bodies warm in the cold climate of the Andes mountains.

If the temperature goes up too far, chinchillas get warm, making them susceptible to heatstroke.

2. They Cannot Get Wet

Chinchillas’ fur should not get wet as it is difficult to dry, which can lead to bacterial and fungal infections. If your pet chinchilla does get wet, dry it thoroughly with a towel.

Related: Why Can’t Chinchillas Get Wet?

Chinchillas need dust baths instead of a water bath due to their dense fur. You have to provide your chinchilla with a dustpan with chinchilla dust to bathe in.

Hay and pellets are the main dietary requirement of chinchillas. Chinchillas should only be fed pellets specifically made for chins.

Feeding pellets made for other rodents is not ideal as it can lead to nutritional disbalance, which is unhealthy.

Chinchillas chew on anything they can find. You should pay close attention to your chinchilla when you let it out for its daily exercise. Remove any plastic or toxic substance from its cage to avoid digestive issues.

6. Chinchillas Are Awake at Night

Chinchillas are active during the night, which is why you should not keep them in your bedroom. They sometimes make noises, which can disturb your sleep.

Keep your chinchilla in a separate room with air conditioning to keep them busy and active while you sleep.

Chinchillas make excellent pets for most people. They are crepuscular, which means they are active during the night. This is an ideal situation for individuals who prefer to interact with their pets during the evening.

Always weigh the pros and cons before buying a pet. Chinchillas’ pros outweigh its cons, making it a great pet.

No, chinchillas do not generally like to cuddle. They like being close to their owners and can climb on their shoulders, but they don’t like being touched.

Yes, chinchillas are friendly and non-aggressive. Chins are great for families with kids as they go along well with their owners with proper introduction and time.

How Long Do Pet Chinchillas Live?