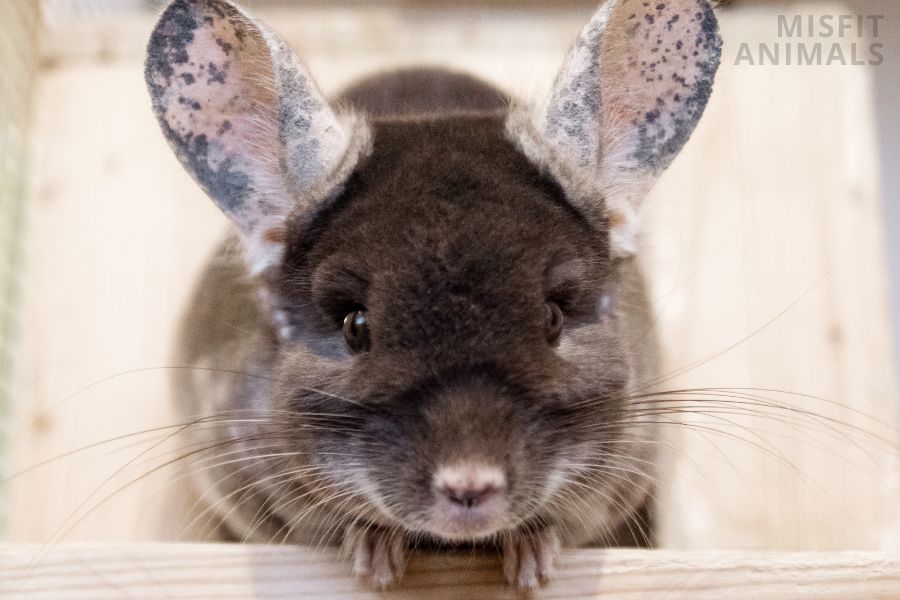 Chinchillas can’t get wet because they have dense fur that traps water molecules, making it challenging for them to dry. The trapped water can cause severe skin issues for chinchillas if left undried.

Chinchillas are kept as pets due to their famous soft fur, which is as smooth as it gets.

Unfortunately, the velvety fur of a chinchilla has its drawbacks. The biggest one is incompatibility with water.

But why is that? And is it dangerous for them to become wet?

If you are planning on getting a chinchilla as your next pet, you should be aware of how to care for one. This article discusses the effect of water on a chinchilla’s skin and how to bathe your chinchilla the right way.

Why Can’t Chinchillas Get Wet?

Chinchillas can’t get wet because their thick coat is difficult to dry. Water is trapped between their hair, which can cause fungal growth. This is one of the biggest issues when chinchillas get wet.

Chinchillas are famous around the world for their marvelous fur. It is among the smoothest furs in the animal kingdom.

The smoothness comes from their hair density. They have a fur density of around 20,000 hair follicles per square centimeter.[1]

Chinchillas developed dense hair to keep them warm in the cold temperatures of the Andes mountains. Their bodies are not compatible with warm and moist climates. They can’t sweat or pant, which makes it difficult for them to cool down.

They drink water to cool their bodies and take frequent dust baths to clean their fur.

This huge density means their bodies are fully covered with fur. They don’t have bald spots.

While having extremely dense hair makes their coat soft, it also makes it difficult to dry. If a chinchilla gets wet, the water droplets get stuck in between the hair.

This is unhealthy as it causes various issues:

What to Do if Your Chinchilla Gets Wet?

Dry your chinchilla as much as you can if it gets wet. Use a dry fluffy towel to remove excess water from your chin’s fur as soon as possible. Don’t let it sit with wet fyr.

Even with proper care and attention, chinchillas sometimes get wet.

There is no need to rush your chinchilla to a veterinarian if it gets wet. You can dry it at home with some dry towels.

Here’s how to remove water from a chinchillas fur:

Can Water Kill a Chinchilla?

A single drop or two of water on your chinchilla is not going to kill it. Having a lot of water in their fur can cause severe problems for chins.

Sometimes, it becomes a necessity to bathe your chinchilla with water, such as when there is excessive dirt on their skin or caustic chemicals. A bath won’t harm it, as long as it’s dried off.

Chinchillas are not allergic to water. It doesn’t harm them directly, but it can cause issues. The presence of water under their fur causes bacterial and fungal infections, which are harmful.

Wet fur reduces their insulation ability. Chinchillas’ fur keeps them warm in the cold environment of the Andes mountains[2]. When they get wet, the opposite happens. The water cools down, reducing the chinchilla’s body temperature, which leads to hypothermia.

How Do You Bathe a Chinchilla?

Unlike other animals and rodents, chinchillas do not need a water bath to stay clean. Instead, they need dust baths.

A dust bath involves a pan of dust in which your chinchilla can roll and play to clean itself.

In the wild, chinchillas use volcanic ash to clean their bodies[3]. The dust helps soak up excess water and is shaken off easily after the bath.

Give your chinchilla a dust bath two to three times per week to keep its fur healthy and smooth. Regular grooming is also essential to reduce the chances of fur matting and keep external objects out from the fur.

Chinchillas do not go well with water. Their fur is extremely dense and traps water molecules. This can cause several serious issues. You can easily dry off your chinchilla’s fur if it accidentally gets wet with a few dry towels.

Dust baths are used instead of water baths to clean chinchillas. This helps chins clean their fur and keep their bodies healthy and free from dirt. They may need a water bath if they don’t get clean during their dust bath.

Use a wet towel to give your chin a water bath instead of showering them with running water.

Dry off the water from their fur to reduce the chances of skin infections and low body temperature.

Yes, chinchillas can swim for short periods. They tend to avoid water altogether, but if they fall into a body of water, they can swim to survive. Longer swimming is not ideal for chinchillas as their fur gets extremely heavy by absorbing water. This can lead to drowning if the chinchilla is unable to reach the shore in time.

How Do Chinchillas Bathe in the Wild?

Chinchillas use volcanic ash or Andean clay to give themselves dust baths in the wild. Volcanic ash is abundant in the Andes mountains of South America, which makes it a viable option for a dust bath. Chinchillas gather a pile of ash in the wild and roll in it to remove excess water from their fur and clean it.

Will a Chinchilla Die if It Gets Wet?

Chinchillas can die if they get soaked in water without a way to remove it. The water causes their body temperature to drop and can cause infections. Water should be removed as fast as possible. This is done with a few paper towels.