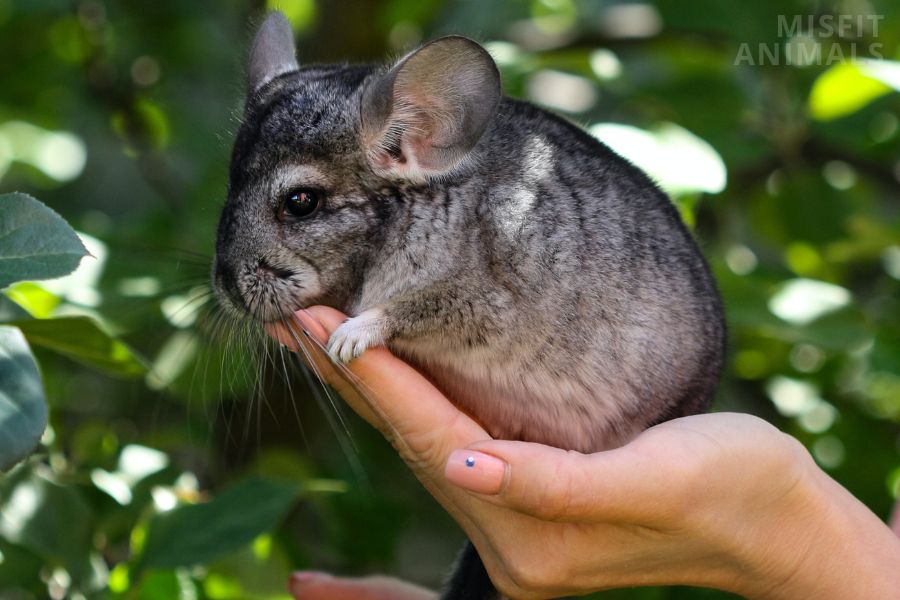 Chinchillas are found in a variety of different colors. Gray is the most common color among chinchillas. Wild chinchillas are most often gray, which helps them blend in the dark and avoid predators.

Chinchillas are small rodents commonly found in South America. They are prized for their luxurious and soft fur, which comes in many different colors.

As a big part of the fashion industry, the color of the fur matters a lot. Many pet owners also care about getting the right-colored chinchilla.

But, some colors are rare and difficult to find.

This article talks about the various colors of chinchillas and their rarity.

Chinchillas can be found in several colors, most commonly gray and white. Pet chinchillas are available in more than one color, while gray is the most common color found in wild chinchillas.

Chinchillas are found in various colors. This is due to decades of selective breeding and mutations. Domestic US chinchillas are descendants of thirteen chinchillas that were brought from Chile to the United States back in 1927.[1]

Chinchilla coat colors also affect their eye colors, which are commonly one of three:

The color of the coat is the result of two genes in its DNA. It depends on the dominant and recessive genes. Some colors are recessive, while others are dominant.

White and gray are examples of dominant colors, while sapphire and violet are examples of recessive colors. If a chinchilla possesses a white and a sapphire gene, its coat color will be white, thanks to the dominant gene.

Chinchillas are available in a variety of colors across the world. Gray, white, beige, and black are the most common chinchilla colors. Here are 14 commonly found colors in chinchillas.

Gray is the most common color found in chinchillas. The standard gray chinchillas have gray backs and sides. They also have a white belly. The color shade can be light or dark, depending on the genes.

Short-tailed chinchillas are mostly gray in color. This helps them avoid danger by blending in the dark.

Pure white chinchillas are also available to be kept as pets. White chinchillas usually have white blended with ebony or sapphire. These adorable small rodents have pink or red eyes complementing their snow-white skin color.

Sapphire is a recessive color and is not commonly found in pet shops. The fur shaft of the chinchillas illuminates the fur and gives a tinge of sapphire to it.

Sapphire chinchillas can either have smooth fur or a speckled pattern due to barring in their fur.

With no black ends, the violet color is a recessive coat color found in chinchillas. The first violet chinchilla was discovered in Zimbabwe.

These small creatures have a purple tinge in their fur, which is gray in color. There are no freckles or spots on the bodies of violet chinchillas. These chinchillas have a white underbelly, much like other chinchillas.

Charcoal color is a commonly found coat color in chinchillas. These chinchillas have a matte appearance, and their fur is extremely smooth.

Charcoal chinchillas can have a fur color between black and gray. These chinchillas have all-black eyes.

Brown velvet chinchillas have brown fur that is luxuriously smooth and soft, almost feeling like velvet. They are highly demanded among the populace and are famous for their fur.

A cross between a gray and a white chinchilla often leads to a silver-colored chinchilla. They have a smooth texture without freckles and have black ears.

Brown mosaic chinchillas are unpredictable and can develop any intensity of coat color. Some chinchillas end up having tan-colored fur, while others can have mostly white fur.

They are usually classified into two types:

Your chinchillas can belong to any of these types and develop brown or white fur depending on their genes.

One of the most demanded chinchillas in the world is the black velvet chinchilla. They are called black velvet due to their extremely smooth, rich, and soft fur, which has a velvety touch to it.

It is because of this that they are also called “Touch of velvet” chinchillas.

They are the second darkest chinchilla breed in the world. These chinchillas have a veiled appearance and have gray sides with white bellies.

A mix of gray and charcoal chinchillas, the ebony chinchilla is darker than an average gray chinchilla. Their bellies are not white, unlike the other chinchilla colors but are instead the same color as their fur.

These chinchillas can have lighter-colored ears compared to the rest of their bodies.

Chinchillas with beige-colored fur are common and readily available. The beige color comes in three intensities:

After several generations of crossbreeding ebony and beige chinchillas, chocolate chinchillas are born.

With each new generation, the crossbreeds develop darker fur, which over time, reaches chocolate color. Some chocolate chinchillas have small brown spots on their fur, while others have fur that fades into gray on their tails.

A mixture of violet and sapphire chinchillas, the blue chinchilla is a beautiful creature. It has a light blue color which shines under the sun. Silver and dark undertones are also found in blue diamond chinchillas.

Their bellies are light gray in color. Baby blue diamond chinchillas are born with light fur, which eventually darkens as they grow.

Black chinchillas are also found in the wild. These are not commonly available and have shiny black fur. Their bellies have the same color as their fur instead of the usual white.

Black chinchillas are available in further different breeds and mutations:

Gray is the most common chinchilla color found in the world. Wild chinchillas are usually gray in color, which helps them burrow and hide in the ground to avoid predators. Darker color skin also helps them blend well in the dark.

There are a variety of shades available in the gray color category of chinchillas. These chinchillas have white bellies, which give them a unique and fun look.

Short-tailed chinchillas are mostly gray in color. The intensity of the color depends on the genes.

Black and brown chinchillas are also common in the wild.

To understand why chinchillas occur in different colors, you need to know about the genetics of crossbreeding.

Genetics plays a vital role in determining various characteristics of every species:

Chinchillas have been crossbred for decades. The earliest instance of crossbreeding chinchillas goes back to 1927 when an engineer named Mathias Chapman asked permission from the Chilean government to buy 11 chinchillas and bring them to the United States.

It is believed that all the pet chinchillas in the United States are descendants of these 11 chinchillas.

Chinchillas have always been found in a few dull colors, such as the standard grey, which is the most dominant coat color. They naturally develop dark skin colors to remain hidden in the dark and avoid predators.

Throughout the history of crossbreeding, chinchillas were bred to produce more desirable and lighter colors.

Artificial selection helped humans produce highly desirable chinchilla breeds such as violet chinchillas which do not occur in nature.

Selective breeding is a process of breeding animals to favor certain traits. This is not reserved for chinchillas but is a process done to most domestic animals, such as farm pigs.

The dominant and recessive genes play a huge role in determining the final color of the fur in the next generation. If your chinchilla has parents of different fur colors, your chinchilla can take after any of its parents or get an entirely different color which is an amalgamation of the two fur colors.

For example, crossbreeding standard grey and violet chinchillas produces chins with standard grey coat color. The violet gene being recessive does not appear in chins in the presence of a highly dominant standard grey gene. But, the offspring still carry a violet gene in its DNA which can be passed on to further generations.

Identify the genetics of a chinchilla before getting one as your new pet. This helps determine the possible coat color of your new pet rodent.

Recessive colors such as sapphires and violet are the result of selective breeding. Different colored chinchillas can be crossbred to produce a mixture of colors.

What is the Base Color of a Chinchilla?

What Are the Different Types of Chinchilla Species?

What Are the Recessive Colors in Chinchillas?