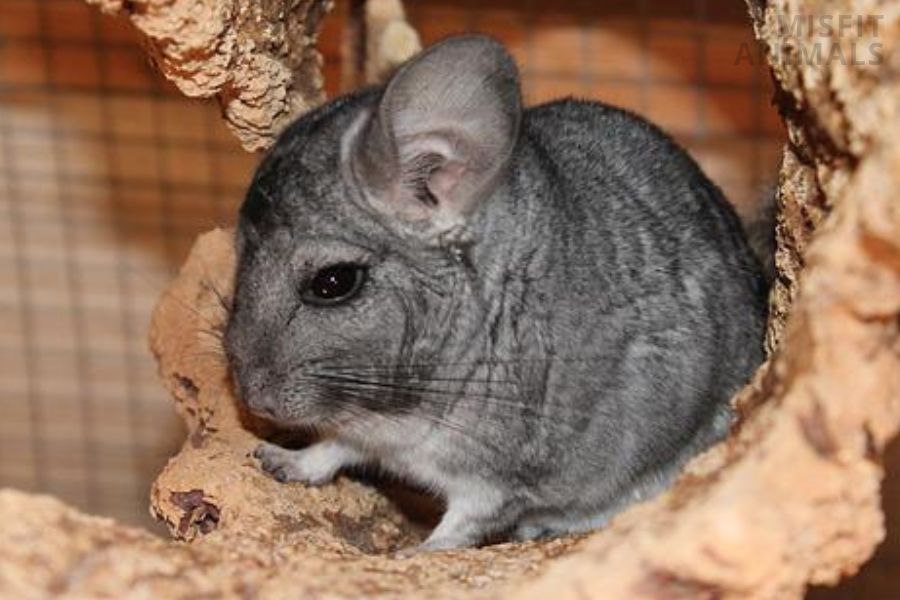 Chinchillas come in many different sizes and colors, but there are really only two different breeds.

While there are only two breeds, there are many different colors (or morphs). These are often used to distinguish between “types” of chinchillas.

So how many types of chinchillas are there?

This article discusses the various types of chinchilla breeds and the different colors in which you can get a pet chinchilla.

The term chinchilla refers to two species of crepuscular rodents commonly found in the mountains of South America.[1]

Chinchillas are larger than ground squirrels, degus, and hamsters. They are known for having the softest fur in the entire world.

The two chinchilla breeds originated in the Andes mountains and are quite different from each other.

The short-tailed chinchilla, Chinchilla Chinchilla, is the larger of the two chinchilla species. It is also known as the Royal chinchilla or the Peruvian chinchilla. This species is native to South America and is considered critically endangered.[2]

They originally thrived in the Andes mountains before they were almost hunted to extinction. Chinchillas are prized for their super soft fur, which has excellent cosmetic uses.

It wasn’t until the early 20th century that hunting chinchillas were banned.[3]

Short-tailed chinchillas are 12-19 inches in length and weigh up to 2 pounds. Even with their short tails, these chinchillas are significantly larger than their long-tailed counterparts.

They are generally found in the wild and live in cold temperatures high in the mountains. They also live in colonies of chinchillas which can include up to a hundred members.

Long-tailed chinchillas, Chinchilla Lanigera, are the smaller of the two chinchilla breeds. They have vestigial pouches around their cheeks and broad heads.

This breed also lives in cold temperatures and can survive below zero, thanks to their extremely warm fur.

Long-tailed chinchillas are between 9 to 15 inches in length and can weigh up to a pound.

This breed is agile, making it easy for them to run and jump to avoid predators in the wild or play with their owners as pets. Long-tailed chinchillas also have weak claws making them great pets for kids.

Like other pet breeds, chinchillas are often bred selectively to produce kits with the desired characteristics.

The most common chinchilla color found in the wild is gray. It is the most dominant coat color as it’s the most practical for survival.

You can find chinchillas in a variety of different colors at breeders across the globe. The most common chinchilla colors are listed below.

The most common naturally occurring chinchilla color is gray.

This type of chinchilla has a white underbelly and dark grey hair on the body and back. Some chinchillas have a light grey coat, while others have a darker grey tone.

White chinchillas are not albinos. Their ears often have a darker tone compared to their body.

This color variation also has a silver hue on their fur under the sun. These chinchillas are widespread and easily found at different chinchilla breeders.

White chinchillas have several mutations via selective breeding, such as white sapphire or ebony white. Both of these are derivatives of white and are considered different morphs.

On the other hand, homozygous black chinchillas are completely black with no white underbelly.

There are two major types of beige chinchillas found in the world:

Heterozygous beige has a dark beige color on its back with light beige along the sides. They also have a white underbelly and red eyes.

Chocolate color is not common among chinchillas. It takes generations of crossbreeding between ebony and beige chinchillas to produce a chocolate chin. Their underbelly is usually white, along with their mouths and paws.

The rest of their body is completely chocolaty brown and soft like velvet.

One of the most sought-after chinchilla colors is the sapphire color. Sapphire chinchillas have silver-grey fur which makes them unique and rare. These chinchillas are highly demanded due to their unique look.

This morph does not have black tips on its hair, which is unique among chinchillas. They have black eyes, and their coat gives a blue tinge when sunlight falls on them.

This chinchilla is a derivative of the standard gray chinchilla. Its fur has been diluted by generations of selective breeding.

Each chinchilla parent must have a recessive gene to produce a sapphire kit, which is rare.

Purple chinchillas, or violet chinchillas, are an extremely rare type of chinchilla breed. These chins have color variations ranging from pure purple to dark grey. Some chins also have patterned violet skin.

These chins have a white underbelly and do not have black tips on their fur.

They get their name from the purple hue in their fur. Violet chinchillas also have black noses, grey ears, and dark eyes.

Pure violet chins are produced by crossing two chins with a purple gene. The result is a chin that is completely covered with purple fur and has a dark grey underbelly.

Violet chins are not bred with each other, as it can result in unhealthy gene development.

Crossing black, sapphire, and violet chinchillas yield a blue diamond chinchilla. Their fur is bluish in color, and they have black eyes. They also have a periwinkle color on their shoulders, face, and back.

These chins have pinkish grey ears and white underbellies.

Blue diamond chinchillas are named such due to their shiny blue hue when placed under the sun. They are healthy and can be crossbred with other chinchillas.

These chinchillas are easily mistaken for white chins.

Which Type of Chinchilla Should You Get?

There are two types of chinchilla breeds in the world: Long-tailed and short-tailed chinchillas. These come in many colors though, such as gray, white, black, beige, and more.

These species are similar but share some differences, mainly relating to their size. Due to selective breeding, there are a variety of different chinchilla colors available in the world.

The different coat colors are for aesthetic appeal and have no effect on the behavior, habits, or lifespan of chins.

A chinchilla resembles a ground squirrel but has lots of fur on its body. It is bigger than a squirrel and has bushy tails. These rodents are 9 to 15 inches in length and have claws on their four limbs. You can find a chinchilla in various colors across pet breeders.

What Is the Darkest Type of Chinchilla?

The black chinchilla is the darkest type of chinchilla found in the world. It is covered with black fur and has a velvety touch to its coat giving it the name black velvet. Black chinchillas can have white underbellies, which gives a stark contrast to their bodies, adding to their beauty.