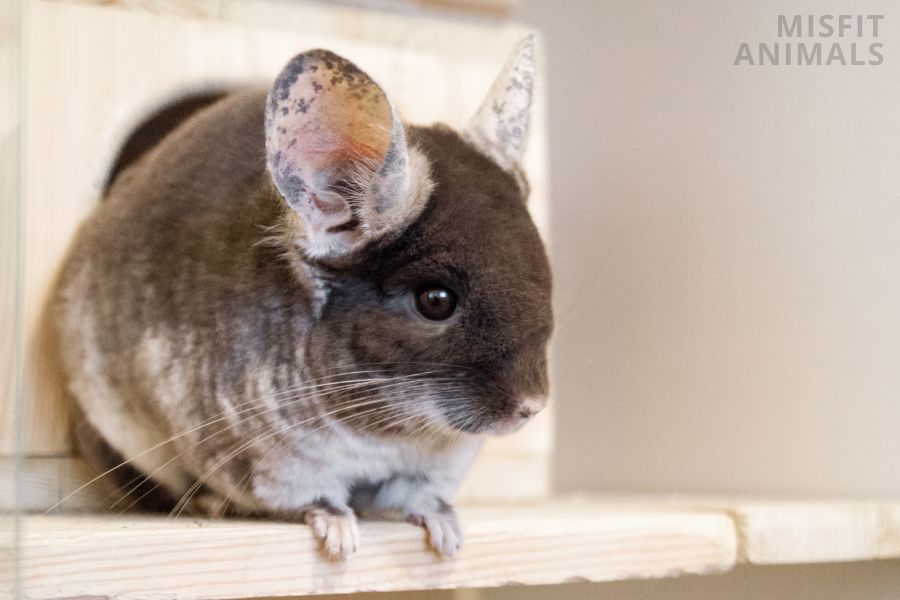 Chinchillas are small rodents with an average size of 9 to 15 inches, excluding their tails. Their weight ranges from 0.8 to 2 pounds.

Most people do not like rodents infesting their houses, while some people love to keep rodents as pets.

Chinchillas are one such rodent.

Chinchillas are usually found in the northern mountains of Chile. They are members of the rodent family and are famous for their soft, luxurious fur. Chinchillas were almost on the brink of extinction due to excessive hunting.

They are larger than regular rats. These rodents are also heavy compared to other rodents.

This article discusses the average chinchilla size, weight, and growth. You will also learn how big they are depending on their age, and more.

Chinchillas have short bodies and small front limbs. Their hind limbs are muscular and longer, which helps them run and dodge a predator.

The average size of a chinchilla is around 9 to 15 inches depending on the species and feeding habits.

Females tend to be slightly larger than males, but it depends on genetics and species.

Pet chinchillas usually belong to the long-tailed chinchilla species. These are the smaller types of chinchillas.

Chinchillas grow rapidly and reach adulthood within a year. They reach their full size within 8 to 9 months of their birth.

Here is a chart outlining the different sizes of chinchilla babies from birth to adulthood.

Most short-tailed chinchillas live in the wild. They rarely reach their full size due to predators and unforgiving weather.

Long-tailed chinchillas range in size from 9 inches to around 15 inches, depending on their diet and exercise.

Long-tailed chinchillas are smaller and lighter than their wild counterparts. These chinchillas do not require strong legs to run from predators, as they are usually kept as pets. Years of domestication have rendered them small and defenseless.

Chinchilla Size Depending on Life Stage

Chinchillas go through many life stages, but they are categorized as “babies” (kits) and “adults” (full-grown chinchillas).

Here is their size depending on life stage.

Chinchillas go through a gestation period of 111 days. For the first four weeks, chinchillas are solely reliant on their mother for food and warmth.

After this period, these half-grown chinchillas become active and start running.

Once they reach 8 to 9 months of age, chinchillas are almost fully-grown and sexually active.

After a period of one year, most chinchillas are fully-grown. Adult chinchillas are around 9-15 inches in length, depending on the species and their diet. Chinchillas reach adulthood within one year of their birth. They can weigh anywhere from 0.8 to 2 pounds.

The final size of a chinchilla depends on the species, environment, and diet.

Chinchillas are heavier than most other rodents, such as rats and mice. They are not as heavy as a Capybara though but still have a significant mass.

Long-tailed chinchillas weigh between 0.8 to 1 lbs. Their long tail adds significant weight to their total.

Short-tailed chinchillas weigh up to 2 lbs. They are bulkier and more muscular than long-tailed chinchillas. This species thrives in the wild and requires a powerful body to avoid dangers and survive in nature.

Yes, chinchillas can become overweight with the wrong diet. Obese chinchillas have visible fat pouches on their necks and armpits. Obesity is not healthy for chinchillas and can cause several health problems if left unattended.

Lack of exercise and improper nutrition are the major causes of obesity in chinchillas. Reduce the number of fatty acids in your chinchilla’s diet to curb its obesity.

How to Weigh Your Chinchilla

There are multiple ways to weigh a chinchilla. You do not require an expensive scale to. A small kitchen scale from a departmental store is more than enough.

If the scale does not have a bowl for measurement, you can use any small bowl and subtract its weight from the final measurement.

Place your chinchilla on the scale and take a measurement. Do this two or three times to get an accurate number.

How Big Do Chinchillas Get in Captivity?

Chinchillas fare well in captivity. Pet chinchillas can grow anywhere from 9 to 15 inches in length.

Chinchillas are excellent pets and are adored by people all over the world.

These small rodents live longer and healthier as pets compared to the wild. Long-tailed chinchillas are usually kept as pets instead of short-tailed ones. These chinchillas are smaller than their wild counterparts.

Short-tailed chinchillas are native to the wild, where they survive on their own.

Pet chinchillas are smaller and weaker than their wild counterparts. This is because they don’t do not require prominent physical features to outrun predators and find food.

Long-tailed chinchillas are shorter than short-tailed ones, despite having longer tails.

When are Chinchillas Fully Grown?

Chinchillas are fully grown after 8 to 9 months. A proper diet and safe environment are needed for chinchillas to reach their maturity.

Chinchillas mature quickly. While they have a long life expectancy compared to most rodents, they reach adulthood in about a year. A healthy chinchilla matures within 8 to 9 months after being born.

They reach their maximum size of 9 to 15 inches when they mature.

How Much Space Do Chinchillas Need?

Chinchillas need a medium-sized cage to remain healthy. A cage of 8 to 12 cubic feet is ideal. This provides them with enough space to roam around.

Chinchillas are active animals. They require enough space to play, jump, and roam freely. Small cages are detrimental to their health, as they need space to roam. Cramped spaces can make your chinchilla inactive leading to less exercise and obesity.

Exercise is important for a chinchilla to remain active and healthy.

Cages measuring 2 x 2 x 3, or around 12 cubic feet, are great for a single chinchilla. Smaller chinchilla species can be accommodated in an 8 cubic feet cage. Consult a veterinarian if you are unsure about the requirements of your full-grown chinchilla.

Chinchillas are small rodents larger than a rat but smaller than a capybara. They are heavier than regular ground squirrels, hamsters, and mice.

Chinchillas belong to the rodent family along with severing other animals:

These rodents have small front limbs and long muscular hind limbs for running and escaping predators.

The Pygmy Jerboa is the smallest rodent species in the world, standing at around 2 inches in length.[1]

The Capybara is the largest rodent in the world, standing at an impressive length of 3 to 5 feet.[2]

There are several different types of squirrels throughout the world. Each sub-type has its unique characteristics.

Chinchillas and Guinea Pigs are both kept as pets. Chinchillas are slightly larger than guinea pigs. Short-tailed chinchillas can be twice the size of an average guinea pig.

Chinchillas are small creatures. These rodents come in two types: short-tailed and long-tailed. Long-tailed chinchillas are more commonly used as pets due to their small size and domestication.

Despite their small size, chinchillas are fast and playful. If you are considering buying a chinchilla, you must learn how to take care of it. Chinchillas are not suited for first-time pet owners. They need utmost care and attention to grow healthy.

How Big is a Full-grown Chinchilla?

How Much Does a Chinchilla Weigh?

How Fast Do Chinchillas Grow?

Chinchillas grow fast. They mature around the age of 8 to 9 months and reach their full size when they reach their first birthday. The growth of a chinchilla highly depends on genetics, species, diet, and the environment.