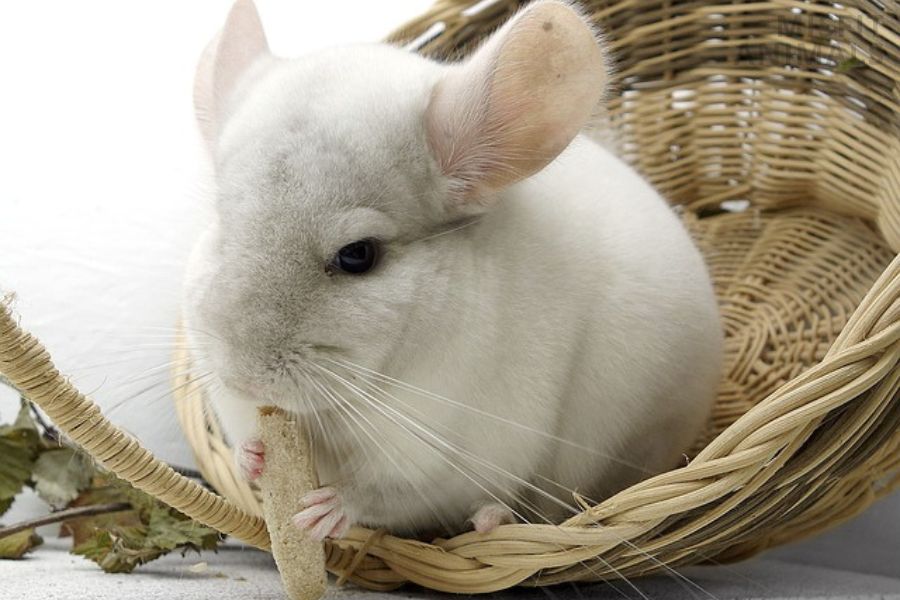 Chinchillas eat hay and pellets as their daily diet. They can also eat several dried fruits and dried vegetables in small quantities. In the wild, they mostly feed on grasses, leaves, and roots.

Every organism needs food to survive. Rodents, chinchillas included, are no different.

Chinchillas eat multiple times every day. Their diet is primarily made up of grasses and other plant-based foods.

But pet chinchillas have some different dietary needs, as they can’t forage in the wild.

Pet chins rely on their owners to provide food and water to them. Caring for their chinchilla is the responsibility of every chinchilla owner.

This article talks about the different types of food chinchillas can eat and food that you should avoid giving to chinchillas.

What Do Chinchillas Eat?

Chinchillas can eat some vegetables and dried fruits. In the wild, they eat grass, berries, and nuts to fulfill their energy requirements.

Chinchillas are essentially herbivorous and rely on plant and plant materials for energy. Their bodies need high amounts of fiber to remain fit. Grasses and hay contain ample fibers, which is why chinchillas love to munch on them.

Water is also an essential part of their diet. They need a constant supply of water to remain hydrated.

If left without water, chinchillas can heat up quickly, which is dangerous to them.

Chinchillas eat in short munching breaks throughout the day. This means that your chinchilla must always have access to food in its cage.

Yes, chinchillas are herbivores, meaning they only eat plant-based foods. Chinchillas have a sensitive digestive system that needs a lot of fiber. Feeding your chinchilla foods rich in fiber such as hay helps keep it healthy and active throughout the day.

What Do Chinchillas Eat in the Wild?

Wild chinchillas primarily eat grasses and hay, as well as the following:

What Do Pet Chinchillas Eat?

Pet chinchillas eat hay and pellets. You should feed your chinchilla pellets that are designed specifically for chins. Pet chinchillas can also be given various dry fruits and vegetables as treats and snacks.

Essential Parts of a Chinchilla Diet

Hay, pellets, and water are the most important parts of a chinchilla’s diet. Chinchillas can survive solely on these three foods. They do need additional nutrients to live a healthy and prolonged life.

Chinchillas are easy to care for and do not require much attention, especially when it comes to their food.

They can easily live on a diet of hay and pellets with some water to wash it all down.

Chinchillas need hay in their diet. Hay consists of around 30 to 50% of fiber[1]. Fiber helps keep their frail digestive systems healthy and safe from diseases.

Chinchillas should be given clean, dry, and fresh hay every day to fulfill their dietary requirements.

Avoid giving your pet chinchilla musty-colored or spoiled hay, as it can severely impact its digestive system.

Here are the best hay options for chinchillas:

Pellets should be given in moderation. High-quality pellets are important, as they provide more nutrients.

Avoid pellets made for other rodents as they can have adverse digestive effects.

Chinchillas need water to survive, and they need it throughout the day. An uninterrupted supply of water is important to keep your chin hydrated and cool.

Chinchillas do not have sweat glands, and their fur is extremely warm. This means chinchillas become hot in warm temperatures, which can cause heatstroke.

It is recommended to provide your chinchilla 24/7 access to clean drinking water in water bottles attached to the cage to avoid this potentially fatal condition.

Types of Food Chinchillas Can Eat

Chinchillas can eat some fresh vegetables, dried fruits, and nuts occasionally. These should be used as treats, as too much fiber or natural sugar causes digestive issues.

Chinchillas have sensitive stomachs, meaning that their are limited foods they can eat.

Foods high in sugar are not suitable for chinchillas and can cause several issues. Fortunately, there are a variety of different food items which chinchillas can eat without getting unhealthy.

Good Herbs and Roots for Chinchillas

The key to feeding chinchillas supplementary foods is moderation. Excess amounts of these foods are not good and should be avoided.[3]

Types of Food Chinchillas Should Avoid

Chinchillas should not eat most fresh vegetables and fruits. Avoid feeding chinchillas foods with a high concentration of sugar or fat as they are toxic.

But, you should avoid relying completely on pellets. A diet solely made up of pellets can adversely affect their health due to a lack of proper fiber.

Here are the most common foods chinchillas should not have.

Bad Nuts and Herbs for Chinchillas

You should also avoid foods that have a high fat-content. All dairy products should also be avoided.

How Often Should You Feed Your Chinchilla? (Feeding Schedule)

Chinchillas should be fed pellets at least two times every day. Hay should always be available to them. Chins also need a constant supply of water.

Chinchillas are crepuscular, meaning that they are most active at dawn and dusk. These twilight periods are perfect for feeding your chinchilla.

Here are some tips for feeding your chinchilla:

What Treats Can Chinchillas Have?

Chinchillas can eat all safe fruits and vegetables as treats. You should not overfeed treats to your chinchilla as large amounts of natural sugar is harmful. An excess of treats also causes chinchillas to develop a reliance on treats which is unhealthy.

Treats can help you socialize with your chinchilla. They help owners train their chinchillas by offering treats as a reward to incentivize the learning process.

Here are some safe treats to feed chinchillas:

Do not give your chinchilla meat, strawberries, raspberries, and most other fruits as treats. These are harmful to chinchillas and can result in serious digestive issues.

Chinchillas eat hay and pellets and drink large quantities of water daily. You should feed your chinchilla pellets at least twice a day at dawn and dusk as chinchillas are highly active at these hours.

Give your chinchilla occasional treats in the form of dried fruits and vegetables. Chinchillas can also eat some herbs and flowers. Avoid giving foods with high sugar content or high volumes of fat to your chinchilla as it can be fatal.

How Much Do Chinchillas Eat?

Chinchillas eat one to two tablespoons of pellets and small quantities of hay throughout the day. Dawn and dusk are the most favorable times to feed chinchillas when they are most active.

How Often Do Chinchillas Eat?

Chinchillas eat many times throughout the day. They need to eat a minimum of two times per day.

Yes, chinchillas can eat carrots. Carrots are good for their health and provide essential vitamins which help strengthen their immune system. Moderation should be exercised when feeding any vegetable to chinchillas.

What Fruits Can Chinchillas Eat?

Chinchillas cannot eat many fruits as they contain high levels of sugars which are toxic to chinchillas. They can eat green apples, pears, and apricots in limited amounts and occasionally. A single piece of these fresh fruits a week is more than enough for chinchillas.

What Kind of Hay Do Chinchillas Eat?

There are several kinds of hay chinchillas can eat. The most common is the Timothy hay which is used by chinchilla owners everywhere. Other viable options are orchard grass, alfalfa hay, and oat hay. All hay contains ample amounts of fiber and can be given to chinchillas.

What Do Chinchillas Drink?

Chinchillas drink water, and they drink a lot of it on a daily basis. Attach two water bottles to the side of their cage. Refill them daily.