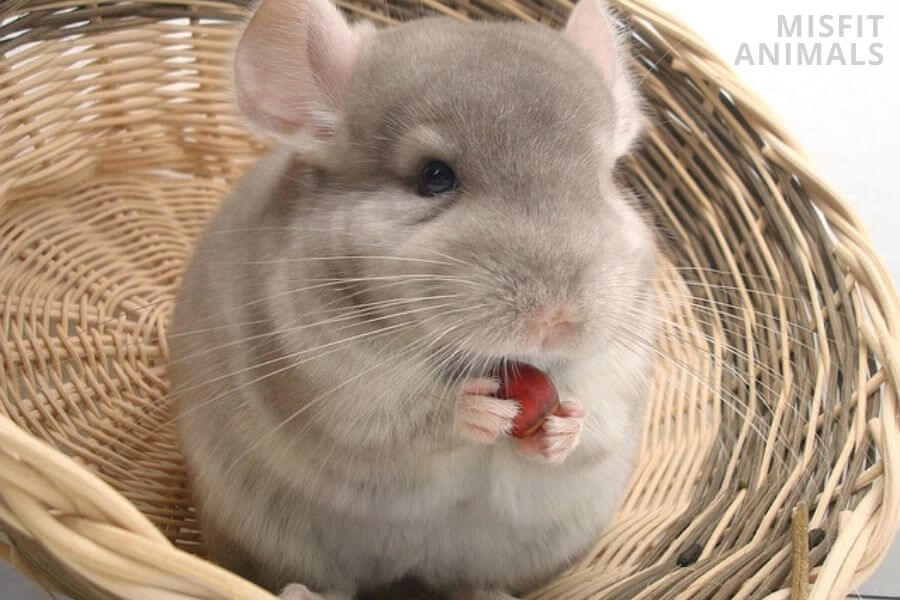 The best and safest treats for chinchillas are organic. Treats abundant with fibers are great for chinchillas. They also love eating hay, apple twigs, and dried herbs.

Chinchillas eat pellets and hay as their primary source of nutrition.

There are a variety of treats you can give chinchillas, such as twigs and some vegetables.

This article discusses the best treats for chinchillas and provides you tips on which treats to avoid keeping your chinchilla healthy.

Chinchillas should be given treats containing less fat and more fiber. This helps them attain proper nutrition without compromising their health.

Chinchillas in the wild eat grass and twigs to fulfill their dietary needs. Pet chinchillas are given pellets and hay.

These are good food items as they provide plenty of nutrients. It keeps them fit and healthy. Treats should do the same.

Giving healthy treats to your chinchilla ensures that your pet enjoys the food while maintaining its health.

Several pet stores sell packaged chinchilla treats claiming to be highly nutritious. These treats should be analyzed carefully as most of them contain high doses of unhealthy sugars.

Always look at the labels to figure out whether a made-for-chinchillas treat is actually made for chinchillas.

Related: What Do Chinchillas Eat?

What Are the Best Treats for Chinchillas?

Apple twigs, dried herbs, dried fruits, and mountain ash berries are some of the best treats for chinchillas. Give your chinchilla treats in limited amounts. Do not use treats as an alternative to hay and pellets.

Chinchillas can have treats once or twice a week so that they don’t develop a reliance on the treats. Use treats as a reward, not a staple in their diet.

There are many types of chinchilla treats on the market[2]. Some of these offer great nutritional value for chins, while others offer no value.

Here are the best treats for chinchillas:

Every chinchilla has its own preferences when it comes to their favorite treat. Try different treats out to find the one your pet likes the best.

Make sure the treats do not contain any harmful ingredients, such as sugar or preservatives, before handing them out.

Are Vegetables and Nuts Good Treats for Chinchillas?

No, most vegetables and nuts are not good for chinchillas. Chinchilla can eat some dried nuts, but fresh nuts and vegetables are not healthy for them in large amounts.

Most nuts contain large amounts of fats and oils, which are harmful to chinchillas[3]. Excessive fat can affect the digestive system of chins leading to severe complications.

Several vegetables are as harmful as fresh nuts for chinchillas. Eating fresh vegetables, especially green vegetables, can cause bloating, which can be fatal.

Here are some vegetables to avoid feeding to chinchillas:

While most vegetables are harmful to chinchillas, there are some veggies that offer actual nutritional benefits to chinchillas if fed in limited amounts:

It is important to note that these vegetables should only be given to chinchillas in small quantities.

What Treats Do I Need to Avoid Giving My Chinchilla?

Avoid giving chinchillas treats that contain high amounts of fat. These are considered toxic to chinchillas. You should also avoid feeding chinchillas foods with a high concentration of sugars as they are unhealthy for chins.

Chinchillas have a sensitive digestive system. They need a stable and well-balanced diet with minimal fats.

If you feed your chin human food, it can develop severe dietary complications, which can lead to death.

Here are treats you should avoid giving your chinchilla:

Some pet owners also give their chinchillas vitamin and mineral supplements without the consultation of a veterinarian. Always consult a veterinarian before making any changes to your pet’s diet.

Nutritional supplements are not needed if you are feeding your chinchilla good-quality pellets.

Avoid feeding your chinchilla these treats to avoid medical issues. Foods with high levels of sugars should be avoided at all costs as they can be lethal.

Check the labels of any chinchilla food you buy at pet stores to identify the main ingredients. If the pack contains sugars, do not purchase it.

Chins should also not be fed food with high levels of fat. These rodents do not eat meat as  they can’t digest it. Do not feed your chin anything that contains dairy or meat to avoid digestive complications.

How Much Should a Chinchilla Eat?

Chinchillas are small rodents that don’t eat much. They eat in multiple short munches every few minutes, but their daily food intake ranges between 1 to 2 tablespoons of pellets.

Chinchillas eat throughout the day in small eating breaks. They eat 1 to 2 tablespoons of pellets every day and stop when they are full.

This means you don’t have to worry about overfeeding them.

You should still avoid putting a large amount of food in their feeding bowl as it can spoil. Always put small amounts of pellets in their bowl and refill it when empty.

Feed your chin one tablespoon at dusk and another at dawn. Chinchillas are more active during these times of day, meaning they’re more likely to eat more food.

Hay, dried fruits, and dried twigs are the best natural treats for chinchillas. You should feed your chinchilla occasionally treats to keep them happy and to fulfill their dietary needs.

While chinchillas don’t need treats if you’re feeding them high-quality food, it can be a good idea to make sure they don’t get tired of their pellets. Treats help bring a healthy change in your chinchilla’s diet.

There are several processed chinchilla treats available in the market which offer excellent nutrition, but there are also many bad treats out there.

Always check the ingredients to ensure that the food does not contain high amounts of sugar or fat as they are harmful to chins. Fresh vegetables and nuts are not good for chinchillas in large amounts and should be avoided.

Give your chinchilla organic treats such as apple twigs and raisins, which are full of nutrients and offer value to chinchillas to keep them happy, healthy, and active.

What Are the Health Benefits of Chinchilla Treats?

Several chinchilla treats offer a variety of nutrients that chinchillas do not normally get from pellets and hay. Treats are a great way to add these nutrients to your chin’s diet. Having a well-balanced diet helps chins remain healthy and protect themselves against several diseases and infections.

What Snacks Can Chinchillas Eat?

Walnuts, almonds, small quantities of apples, and raisins are some of the snacks chinchillas can eat. You can also feed your chinchilla carrots, celery, pumpkin, potato, dried cranberries, and marigold flowers as alternates. These treats are healthy and can be fed to chins in small amounts occasionally.

What Are Some Homemade Chinchilla Treats?