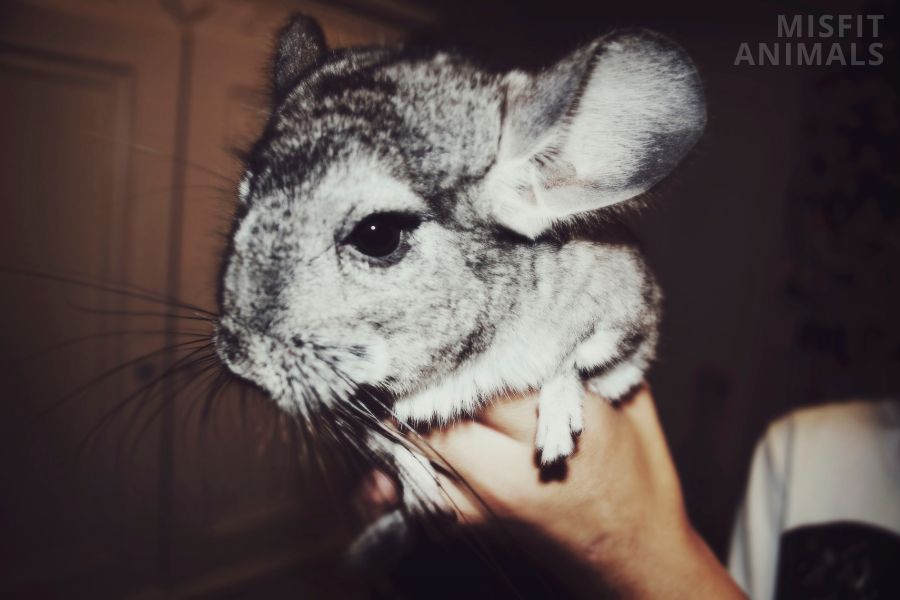 Chinchillas are not nocturnal but crepuscular. They wake up at dusk and remain active during the night. They are also most active at dawn which contrasts with the nocturnal animals.

Everyone sleeps, both humans and pets. Most living creatures sleep at night. These are diurnal. But not all animals follow this rhythm.

There are many nocturnal, or crepuscular, animals. These sleep during the day and are active at night, dawn, or dusk.

But what about chinchillas? Are they nocturnal, or not?

These small animals are prized for their smooth fur, which is one of the softest in the animal kingdom. If you are planning to keep a chinchilla as your next pet, you should know about their sleep cycle.

This article discusses the sleep pattern of chinchillas and gives you insights into their nature of sleep.

No, chinchillas are not nocturnal but crepuscular. They are active during dusk and dawn, while nocturnal animals are only active after the sun has gone down.

Chinchillas are active during the night, but that does not mean that they are nocturnal.

These tiny rodents are mostly active during the twilight hours of dusk and dawn[1]. Nocturnal animals become active only in the dark and hide when the sky starts to illuminate.

This is a good thing if you work during the day. You will come home to find your chinchilla waking up.

Chinchillas remain active throughout the night, playing, eating, and taking care of themselves.

Are Chinchillas Nocturnal, Diurnal, or Crepuscular?

Chinchillas are crepuscular, meaning they are most active when the sun is setting and rising. They are also active in between, during the night, but not as active as during dusk and dawn.

Here are the differences between diurnal, nocturnal, and crepuscular animals:

Crepuscular animals are a midpoint between nocturnal and diurnal animals. Chinchillas are active throughout the night and require ample interaction and exercise to remain engaged.

When Do Chinchillas Sleep?

Chinchillas sleep after dawn and stay asleep during the day. They wake up when the sun starts to go down or if they reach 10-14 hours of sleep.

Chinchillas sleep during the day. They require undisturbed sleep for 10 to 12 hours every day.

To allow chinchillas to sleep undisturbed, they should be kept in a secluded room away from distractions. This helps maintain their sleep cycle.

They do sometimes wake up to have a bite to eat or urinate, whereafter they go back to sleep. They can do this several times during a single day.

Related: How & Where Do Chinchillas Sleep?

When Are Chinchillas Most Active?

They remain active throughout the night, playing, jumping, and exercising. Chinchillas often disturb their owners at dawn by making noises as they are full of energy.

Keep your chin in a separate room to avoid any disturbances.

How to Make Sure Your Chinchilla Gets Enough Sleep

To make sure your chinchilla gets enough sleep, make sure they get a proper diet with enough nutrients. Keep noise to a minimum and dim any lights. Exercise also helps them use their energy, allowing them to fall asleep faster.

Chinchillas need a good day’s sleep to rest after a long day of playing.

If you feel your chinchilla is not getting enough sleep, there are certain things you should take care of:

Ensure that your chinchilla is getting all the nutrition to sleep well. Giving them snacks with too much sugar keeps them awake and contributes to bad sleeping patterns.

Chinchillas sleep better when they are tired. To give your chinchilla a good sleep, ensure that it is getting proper exercise.

One way to do this is to let your chinchilla roam outside the cage in a controlled environment.

You can also place exercise wheels and chew toys inside your chin’s cage to keep it busy and engaged. An exercise wheel helps your chinchilla remain healthy and burn off excess calories.

Ensure that your chinchilla has the best possible environment for sleeping. Chinchillas need a dimly lit room that remains undisturbed throughout the day. Keep your chinchilla in a room away from all noise.

The room should also have some sunlight as chinchillas need sunlight to differentiate between day and night. Air conditioning helps keep chins cool especially in hot weather.

Having clean fur helps your chin sleep better, but they don’t need water baths. Their fur is too dense for water, which is why they need dust baths.

Chinchillas roll in the dust baths to remove any dirt from their fur and distribute the body oils evenly. They love playing in dust baths and should be put in these every once or twice per week.

Where Do Chinchillas Sleep?

Chinchillas do not necessarily need a bed. They sleep in tight corners while standing up. Chins also sleep in their hiding spots if they feel vulnerable.

Chinchillas are not picky about their sleeping space. They sleep wherever they can.

They usually sleep in a tight corner while standing on their limbs. It is not uncommon to find chinchillas sleeping on its side or its back too.

If chinchillas feel vulnerable, they run to their hiding spot to sleep. It is important to place a hiding spot or nest inside your chinchilla cage so your chin has a place to go when it feels threatened.

Can You Change a Chinchilla’s Sleep Pattern?

No, you can not change a chinchilla’s sleep pattern. It’s their natural instinct to sleep during the day. It is unnatural and unhealthy if their sleep pattern changes.

Keeping chinchillas means you get to interact with your pet at night. Some owners find this annoying, as they can keep their caretakers up all night because of their noises.

While you can try changing their sleep pattern, you won’t succeed.

It is natural for chins to sleep during the day. Trying to alter their natural behavior can cause health issues, such as stress.

Chinchillas are crepuscular animals and are highly active during dusk and dawn. They are not nocturnal, but they do sleep during the day. Chinchillas sleep for more than 10 hours every day and should not be disturbed during their sleep.

It is not possible to change a chinchilla’s sleep schedule with practice. This can only lead to stress buildup in your chinchilla, which can lead to death.

Avoid altering its sleep cycle and let your chinchilla sleep according to its natural cycle.

How Active Are Male Chinchillas?

Male chinchillas are extremely active during dusk and dawn, much like their female counterparts. They reach maturity soon and should not be kept in the same cage as female chinchillas to avoid unwanted pregnancies. Chins mate fast, and keeping them together almost certainly leads to reproduction.

Are Chinchillas Active in the Morning?