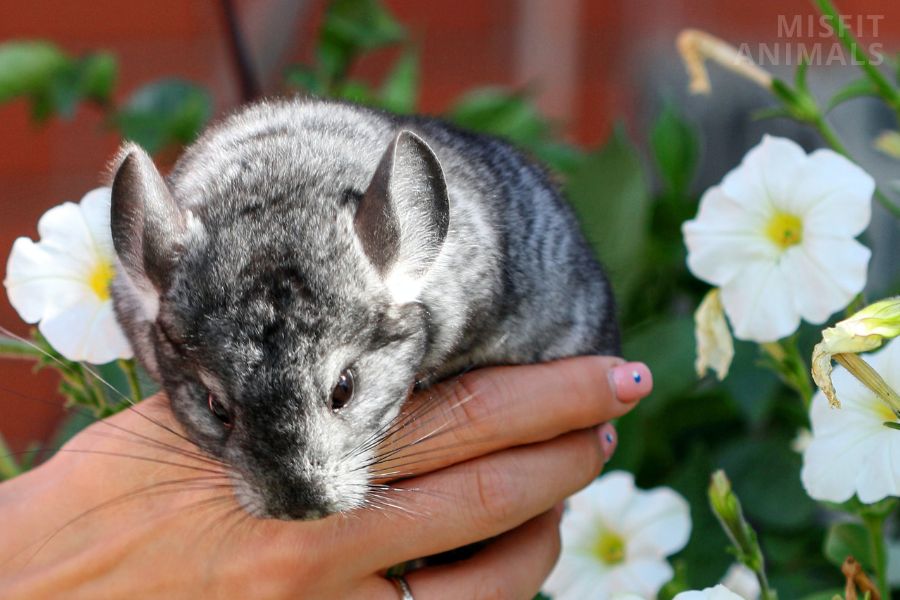 Chinchillas make various sounds depending on their mood and what they are trying to communicate. Low, gentle squeaking sounds are one of the most common chinchilla noises.

Chinchillas are adorable little animals. They are popular around the world as pets.

The biggest reason chinchillas are famous is their soft velvet coat which is one of the smoothest furs in the animal kingdom.

Chinchillas are relatively quiet. But they do make sounds to represent a mood.

Screaming, squeaking, and grunting are some of the various sounds of a chinchilla.

This article lists nine chinchilla sounds and their meaning, so you can understand your pet chinchilla better.

Why Do You Need to Learn About the Different Sounds?

Learning what chinchilla sounds mean helps identify the emotions of your chinchilla. It also helps you understand what your pet is trying to communicate.

Chinchillas have a diverse set of sounds. Each has its unique meaning. Learning about these sounds helps you connect with your pet emotionally and bridge the communication gap a little.

Chinchillas often make noises when they want to communicate with their owners. Some sounds do not represent an emotion but are simple meaningless grunts. You should be able to tell when your chinchilla is connecting with you, and when it’s grunting just to grunt.

While typically quiet and shy, chinchillas do feel different emotions and have a sound for each of them.[1]

The most common chinchilla emotions are:

Gentle squeaking and barking are some of the most common chinchilla noises. Chins also make warning noises to fend off attackers or threats.

Chins are not exceptionally loud rodents. They squeak, nibble, and bark occasionally. Being nocturnal means that your chinchilla is more likely to make sounds during the night [2].

Here are 9 common chinchilla sounds and their meanings:

A faint squeaking sound is one of the most common noises chinchillas make. It is a low and irregular sound but involves high-pitched squeaking.

This noise is an indication of happiness and satisfaction. Chins make this sound to let their owners and other chins know that they are safe and content.

They use it in various scenarios:

These are some of the common reasons why chinchillas make a low squeaking sound.

Chinchillas make teeth-chattering sounds when they are afraid or happy. Most of the time, it is the latter. A happy chinchilla can make this sound to indicate that they feel safe and content.

To tell the difference between a fear sound and a happy sound, observe the situation. If your chinchilla is making teeth chattering sounds during cuddling or eating, it is doing so due to happiness.

If there is a stressor making it afraid, then your chin is making this noise out of fear.

A sudden shock or startle make chinchillas run away. When scared, they let out a short sudden noise. This sounds like a short scream which some people find funny-sounding.

If your chinchilla encounters something unusual or feels threatened, it responds with a series of short and long bursts of sounds. The warning call involves a series of barking noises aimed at responding to danger.

Baby chinchillas often make these warning calls when they are brought home. This is because they are unfamiliar with the people and the environment making them anxious.

Chinchillas’ barks sound a lot like a duck’s quack. Barking involves a series of loud rhythmic noises to warn other chinchillas in their colonies of predators and impending dangers.

Male chinchillas also use barking when they fight to scare the enemy and show their dominance.

Screaming is a loud, high-pitched sound similar to squeaking. The main differences between casual squeaking and screaming are the urgency and loudness.

Check your chinchilla instantly if you hear this sound. If there are signs of injuries or pain, consult a veterinarian to provide your pet with proper care and attention.

Kacking (or spitting) involves a sharp, sudden coughing sound. Chinchillas make this sound when they are angry. It is also possible that your chinchilla is in defense mode and is ready to attack anyone who approaches it.

Stay away from your chinchilla if it looks defensive, as it can hurt you. Allow it to calm down before approaching.

Occasional kacking is nothing to worry about. If the behavior persists, there can be an underlying condition that requires your attention.

A defensive sound is a sudden forceful noise lacking empathy and compassion. It sounds like a shush call and means the chinchilla is not in a good mood.

When chinchilla babies get too demanding of their mother, she can make a defense sound to control the kids.

New chinchillas also make these sounds when they do not want to be approached by a human.

Chinchillas make contact sounds when contacting other chinchillas. These sounds are soft and indicate happiness and satisfaction. Chinchillas enjoy the company of other chins and make grunting noises to indicate their enjoyment.

Baby chinchillas also make contact sounds when they interact with their mothers.

Chinchillas make a variety of sounds. Some sounds indicate happiness, while others indicate fear and pain. Understanding what these sounds mean can help you connect better with your chinchilla.

Chinchillas are not loud animals and prefer keeping quiet. They do make various sounds depending on their mood and condition. Spending more time with your pet chinchilla can help you form a stronger bond and learn about the specific needs of your chinchilla.

What Does It Mean When a Chinchilla Squeaks?

Chinchillas are not loud. They prefer to remain quiet most of the time. They do make several high-pitched and loud sounds occasionally when they are in pain or encounter a predator. It is important to differentiate between a causal squeak and a chinchilla scream to identify your pet’s issue.