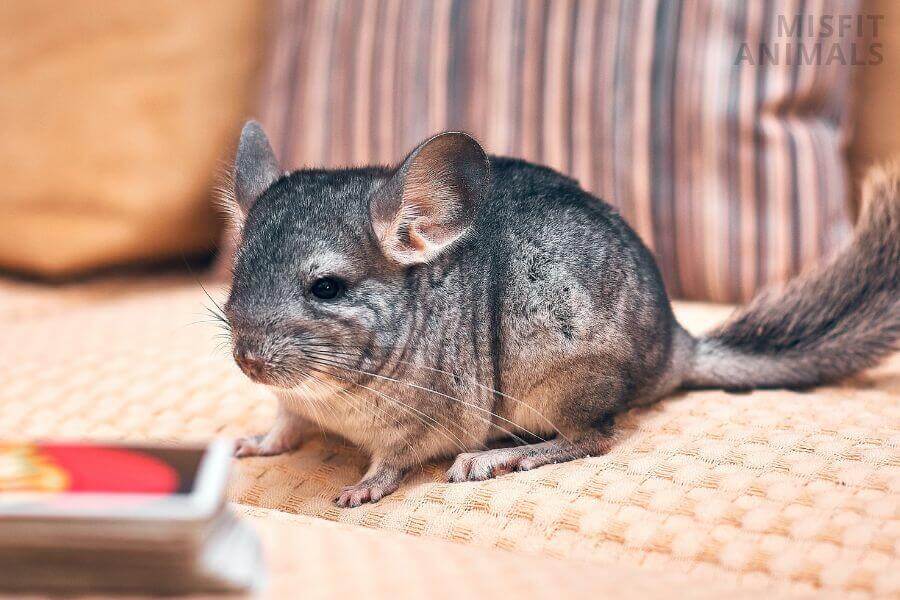 Chinchillas can live alone as long as they are cared for and receive regular social interaction with their caretaker. Keeping multiple chinchillas does increase their mental health when left alone for long periods.

Chinchillas are adorable little rodents commonly found in the Andes mountains in South America[1]. These rodents are kept as pets throughout the globe.

Pet owners usually keep multiple chinchillas at home, but some owners choose to adopt only a single chinchilla.

Having a single chinchilla requires more effort than keeping multiple due to their social needs..

This article discusses whether chinchillas can live alone and provides you with tips for caring for a single chinchilla.

Yes, chinchillas can live alone. They can survive alone but require a lot of attention and care from their owners. Chinchillas are usually happier in pairs.

Living alone is not healthy for humans. But the same can’t be said for chinchillas.

Chinchillas can live alone indefinitely and remain content if proper care and social interaction are given.

Having another member from the same species makes chinchillas happier, but they don’t feel sad in the absence of other chinchillas. As long as they get enough human interaction.

You must provide constant social interaction to your chinchilla. Without love, communication, and affection, your chinchilla can feel lonely, which can affect its health.

Do Chinchillas Require Much Attention?

Chinchillas are social animals. They live in colonies of multiples to fulfill their social requirements. Chinchillas remain more content in groups compared to those living alone.

Chinchilla colonies in the wild range from a few chinchillas to hundreds of members[2]. These colonies act as a family and are matriarchal in nature.

Having multiple members in the colony helps chinchillas meet their social interaction requirements. They snuggle together when it is time to sleep, play with each other, and generally create social bonds.

Chinchillas living as pets usually do not have this luxury and instead are dependent on their owners to interact with them.

Do Chinchillas Need to be in Pairs?

Chinchillas do well in groups, but they don’t need to be in pairs. Chinchilla pairs help comfort each other. They can be kept in same-sex groups or in male/female pairs. Different genders should be kept in separate cages to avoid unwanted breeding.

Proximity to another chinchilla also helps your chin feel comfortable.[3]

Chinchillas in pairs require less human interaction than chinchillas living alone. This is because multiple chinchillas provide each other companionship and support.

How Long Can Chinchillas Be Left Alone?

Pet chinchillas can be left alone for a maximum of 72 hours. They need human assistance to remain healthy. They need their caretaker to give them food and water.

Chinchillas in the wild are self-reliant and do not require any assistance to survive. Their instincts help them find food while avoiding predators.

Pet chinchillas are a different story.

As pets, these chinchillas are dependent on their owners for proper food and water. If your chinchilla does not receive adequate nutrition, it can develop certain diseases which can be fatal. Chinchillas must constantly eat due to their sensitive digestive system.

Leaving your chinchilla completely alone can be disastrous. Even if you provide your chinchilla with adequate food, water, and dust baths, it can die of loneliness in the absence of human interaction.

Chinchillas are highly social and rely on social cues and communication to remain happy and healthy.

At most, you can leave your chinchilla alone for a maximum of 72 hours. This is only applicable if you have set up an adequate supply of food and water for your chin.

Chinchillas are highly self-dependent and can survive completely on their own.

If you have more than one chinchilla, then you can leave them alone for longer periods.

Yes, chinchillas need playtime. They are energetic and active little creatures who are constantly running around the cage from dusk to dawn. Having a large cage is vital to provide your chinchilla with adequate space to play and jump.

Chinchilla play time depends on its age and condition:

Chinchillas are oblivious to being alone if they are properly cared for. Chinchillas who do not receive adequate affection and interaction from their owners can get depressed due to loneliness.

It is recommended not to leave your chinchilla unattended for more than a day.

Caring for Your Single Chinchilla

Chinchillas require a constant supply of food and water. Multiple dust baths every week are mandatory. Understand the various sounds of your pet chinchilla to better identify its issue.

Buying a chinchilla as your next pet can be a difficult decision if you don’t know what it takes to care for one. They are excellent pets and do not require much maintenance.

Here are some tips on how to properly care for your single chinchilla:

What Are Chinchillas’ Social Needs?

Chinchillas are incredibly social animals and require constant interaction with other chins or with their owners. Every individual is different in temperament and behavior. Some are highly social, while others are mild.

Chinchillas are happier when they are in groups. These creatures are comfortable in the presence of another chinchilla. Human interaction can serve as an alternative to chinchilla interactions.

Allow your chinchilla to roam outside the cage every day. Remove any wires or pointed objects which can be dangerous for your little pet.

Chinchillas are great pets. Their soft fur and affectionate nature make them a great addition to a house. These rodents prefer to live in groups but can live alone with proper care and attention.

Chinchillas are social animals and require the presence of another chinchilla or their owners to interact and remain happy. Adopting a second chinchilla can help lessen the interaction time with their owners.

Can Chinchillas Live with Other Animals?

Yes, chinchillas can live with other animals as long as they are kept in separate cages. These rodents do not do well with predator species such as cats and dogs but are very comfortable with species from the prey category.

Can Chinchillas Die of Loneliness?

No, chinchillas do not die of loneliness if proper care is given to them. In the absence of any sort of interaction, they get sad and unhealthy. Lack of proper food and water can also cause death.

Can Chinchillas Live Together?

Chinchillas can live together in separate cages. Males are comfortable living with each other in the same cage if they have been introduced to each other beforehand. Females are more likely to attack other females and should not be kept in one cage.