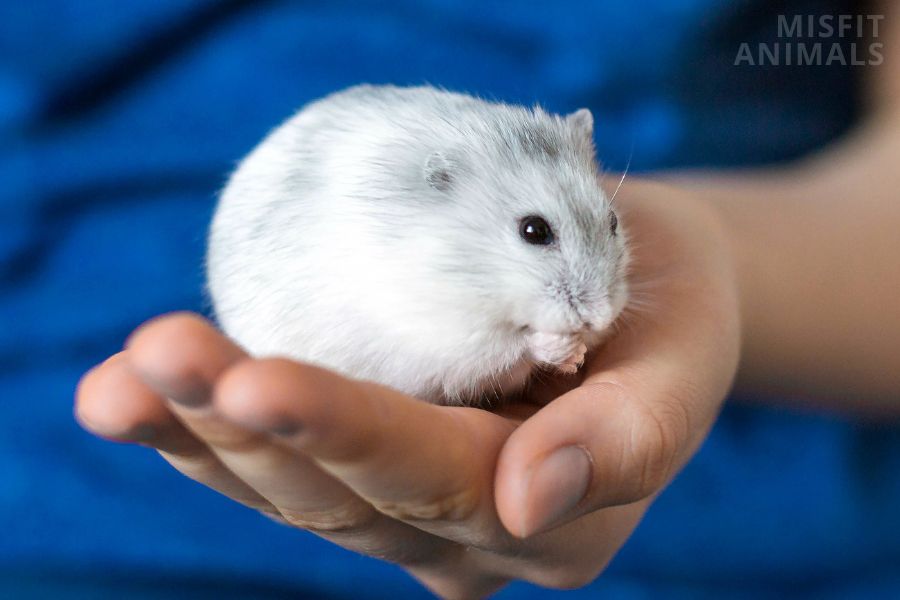 The main difference between chinchillas and hamsters is their size. Chinchillas are on average twice as large as a hamster. They both look alike and have similar nutritional requirements but differ in several ways.

If you are looking for a small, furry rodent as your next pet, chinchillas and hamsters are great contenders.

Both rodents are famous around the world for their cuteness and are kept as pets by a multitude of people.

Chinchillas and hamsters are part of the rodent family and resemble each other. This makes it difficult to tell the difference between them.

This article discusses the difference between chinchillas and hamsters and provides you with tips on which animal is best suited for you.

Chinchilla vs. Hamster: An Overview

Chinchillas and hamsters are both small furry rodents that are kept as pets. These rodents require a lot of effort to train and care for. They both eat hay as their primary food source.

Chinchillas and hamsters share several similarities and differences, which must be identified before selecting the right pet.

Both rodents require a lot of time and effort to care for. They are also highly intelligent and can learn basic commands quickly. Though chinchillas are better at learning than hamsters.

Chinchillas make excellent pets. They are famous around the world for their prized fur, which is one of the smoothest furs in the animal kingdom. They were nearly driven to extinction as their fur is highly demanded by the fashion industry.

Wild chinchillas are found in the Andes mountains of South America[1]. They live in large colonies of up to a hundred chinchillas since they need a lot of social interaction.

Keeping a pet chinchilla means you have to provide your companion with a lot of interaction to meet its social needs.

They are nocturnal and are active during the night. They rummage around at night, which bothers some pet owners.

A chinchilla can live alone with proper care and attention but do better in the company of another chinchilla.

Hamsters are one of the most famous rodent species in the world. They come in a variety of sizes and colors. Hamsters multiply quickly due to their short lives, and thus, the males and females have to be kept separate to avoid unwanted pregnancies.

There are five main kinds of hamsters found globally:

The Syrian hamster is the most common type. Hamsters are also nocturnal and are active during the night. They do not live as long as chinchillas and have an average lifespan of a little over 2 years.

Both chinchillas and hamsters belong to the rodent family and look a lot alike. Chinchillas live much longer than hamsters and are bigger than their counterparts.

Comparing two different animals is not easy due to their different physical and character traits. Chinchillas are more suited for a cold environment while hamsters do well in mild temperatures.

Both of these rodents require plenty of space and exercise to remain active and happy.

Here are the main differences between chinchillas and hamsters:

Chinchillas are, on average, two times bigger than a hamster. Both rodents are covered with fur.

Chinchillas’ fur is thick and lush. This is due to their habitat in the cold mountains. The thick fur helps chinchillas keep their bodies warm during cold nights.

Hamsters’ coats are not as thick as that of a chinchilla.

Chinchillas have long fluffy tails, much like a squirrel. Hamsters, on the other hand, have short tails[3]. Some hamster species have so short tails that they aren’t visible to the naked eye.

Hamsters are not aggressive by nature, but they can bite if startled or frightened. Biting is a form of self-defense for hamsters. With proper training, you can earn your hamster’s trust.

Do not wake up your hamster suddenly if you don’t want to be bitten.

Chinchillas are active, fun, and energetic animals. They are wary of strangers but love to socialize. Chinchillas are slightly more aggressive compared to hamsters and can bite if they feel pain or are threatened.

Their teeth are long and sharp making their bites dangerous. With time, chinchillas warm up to their owners and don’t feel threatened when touched.

They love playing in their cages, which means that the cage must have adequate space so the chin can explore freely without constraints.

They love following a routine and can develop stress if the routine changes abruptly. Chinchillas do not like to be held when young and untrained. With proper training and interaction, you can earn your chinchilla’s trust and hold it without problems.

Chinchillas are highly intelligent rodents making them great pets to train. It takes some time to fully train chinchillas as they are untrusting toward humans. Offering treats aids the training and reinforce positive habits.

They can learn basic commands from a young age.

Related: How Smart Are Chinchillas?

Do not keep your chinchillas in a cage all the time. Chinchillas love exercising, and a cage is not a good place to do so. Letting your pet roam outside the cage in a safe environment is vital to keep it healthy and happy.

Hamsters are curious. Letting them play outside the cage goes a long way in keeping them satisfied. Hamster balls and wheels are some of the most effective and fun toys for pet hamsters.

Use treats to train your hamster. With proper training, they will trust you enough to climb your hand without fear.

Rodents are at risk of catching a variety of diseases and infections. Bone fractures and sprains are common among chinchillas. A healthy chinchilla is active and easily sociable.

There are several health conditions that affect chinchillas:

Hamsters are less likely to get sick compared to chinchillas. They are healthy rodents and rarely develop life-threatening diseases.

Weight loss, lethargy, fur loss, and a hunched posture are some of the most common signs of health issues in hamsters.

Some of the common health issues in hamsters are:

Consult a veterinarian if your chinchilla or hamster displays signs of sickness to provide them with proper care and treatment.

Chinchilla vs. Hamster: Which Is Better for You?

Chinchillas and hamsters are small furry rodents famous around the world for their adorable nature and physique. Chinchillas are larger and have longer lifespans than an average hamster.

Chinchillas are also more aggressive and territorial than a hamster which makes their personalities polar opposites. Hamsters are docile in nature and do not attack other animals.

Both these rodents require a lot of time and energy to train and care for. If you are looking for a pet that has the potential to stay for a long time, a chinchilla is a great option.

If you are looking for a less aggressive and more loving pet, a hamster is the right choice.

Pros of a Chinchilla

Chinchillas are fun and adorable rodents. There are various pros of having a pet chinchilla:

Related: Are Chinchillas Easy to Take Care Of?

Cons of a Chinchilla

Chinchillas can be difficult to keep for many reasons:

Pros of a Hamster

Hamsters are easy to keep, and they are very playful. Here are the best reasons to buy a hamster:

Cons of a Hamster

While hamsters are adorable pets, they can be a bit challenging to keep:

Can Chinchillas and Hamsters Live Together?

No, chinchillas and hamsters cannot live together as they belong to different species and have different personalities. Chinchillas can attack hamsters if they feel threatened by it. Hamsters are not aggressive by nature, making them an easy target for chinchillas.

Chinchillas and hamsters have strikingly different personalities. Chinchillas tend to be more aggressive and violent compared to hamsters. Hamsters are docile and do not engage in aggression unless threatened.

Putting a chinchilla and a hamster in the same cage is dangerous for the hamster. The chinchilla can act out in aggression towards the hamster as it does with other unwelcome visitors.

Hamsters are small and stand no chance against the aggressive chinchilla.

The two rodents can live together in the same house, provided they live in different cages. Do not let your chinchilla and hamster out of the cage at the same time or in the same room. Keep their cages close to each other to introduce them.

If they behave positively, you can keep the cages adjacent to each other.

Are Chinchillas and Hamsters Related?

Are Chinchillas Better Than Hamsters?