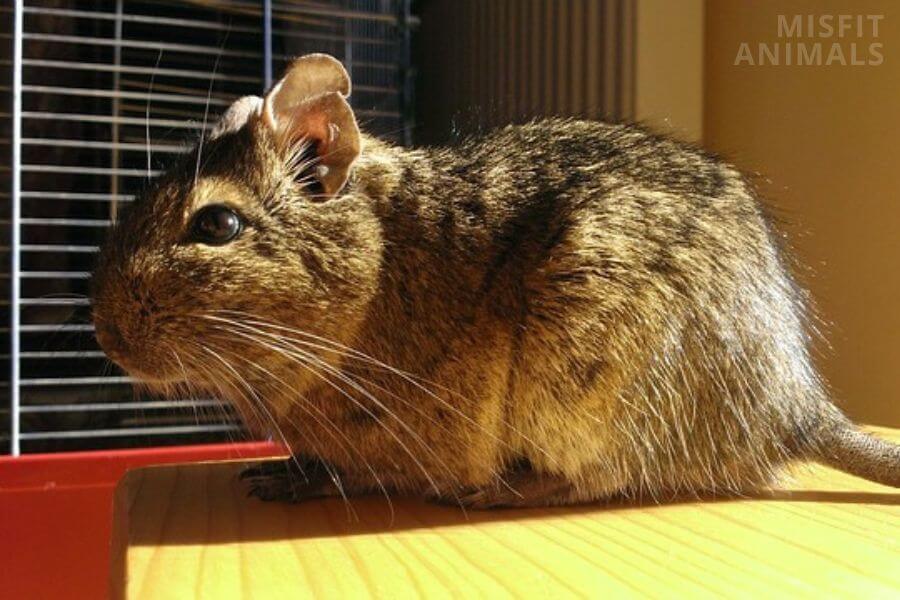 The main difference between a degu and a chinchilla is their fur. Chinchillas have one of the smoothest furs in the animal kingdom. Degus have smooth fur on their bodies, but it is rougher compared to the smoothness of a chinchilla’s fur.

Degus and chinchillas are little furry rodents that are popular throughout the world. They are kept as pets in many households and are generally confused with one another.

There are several differences and similarities between these two rodents, which you must know before deciding on your next pet.

This article discusses the differences between chinchillas and degus and provides you with guidance to select the right pet.

Degus and chinchillas are small animals belonging to the rodent family. Chinchillas are bigger and bulkier than degus and live twice as long.

They have both similarities and differences.

Degus are small furry rodents commonly found in northern and central Chile[1]. They are related to chinchillas and guinea pigs. These small rodents are curious, making it interesting to watch them play in their cages.

Degus prefer living with other degus as they are social animals and love interactions but can live alone with proper care and attention.

They are easy to care for, making them great pets for families with little children.

Chinchillas are larger and heavier than degus. They also have longer lifespans. These rodents are native to the Andes mountains of South America[3].

Chins are social animals and love living with other chins. In the wild, they live in colonies of up to a hundred chinchillas.

There are two types of chinchillas:

The major difference between them is their size, with short-tailed chinchillas being bigger than long-tailed ones.

Chinchillas are also highly curious and love playing in their cage. They are nocturnal and remain active during the night.

Which Is Better: Degus or Chinchillas?

Both degus and chinchillas have their pros and cons as pets. Chinchillas are easy to care for and have the smoothest and softest fur. Degus are more interactive and like to play with their owners.

Advantages of Having a Chinchilla

Chinchillas are soft rodents that love interacting with their owners. There are several pros of having a chinchilla as your pet:

Advantages of Having a Degu

While having a chinchilla as your next pet is a good choice, there are reasons why having a degu is better for you:

Similarities Between Degus and Chinchillas

Degus and chinchillas share several similarities. The biggest is their physical appearance. Chins and degus look similar, and it is difficult to distinguish them at first sight.

Degus and chinchillas are both native to South America. They both belong to the rodent family, along with rats, mice, capybaras, guinea pigs, and hamsters.

Chinchillas and degus look alike and are challenging to tell apart from a distance. They are both small, furry, and affectionate animals. Chins and degus also have similar coat colors and almost the same color range.

Both animals interact with other members of their species and with their owners. They are also curious about their environment.

It takes considerable time and effort to make chinchillas and degus trust you as they are wary of predators.

Degus and chinchillas love playing and exercising outside their cages which is why they should be let out of their cage for a few hours every day.

Comparing Characteristics of Chinchillas and Degus

There are certain traits in which chinchillas and degus differ. Chinchillas are more aggressive and alert than degus. A full-grown degu can be roughly the same size as an average chinchilla.

Chinchillas and degus are adorable pets known for being affectionate and loving. There are several differences between the two rodents, which are detailed below.

Degus are wary of threats are do not easily trust humans. Degus require a lot of interaction to get used to a human. Once it becomes familiar with a face, a degu expects even more interaction.

They are soft-natured and only attack if they feel threatened. Degus are quick learners and get along well with other degus. They can live alone with proper interaction and care but do well in groups.

Chinchillas are also always alert and wary of strangers. This is because they are at risk of being hunted by predators in the wild and instinctually stay away from larger creatures. They are more independent than degus and are not keen on being touched by humans.

This does not mean that chinchillas hate the human touch. They can be held in their hands, but they prefer exploring the environment instead of physical touch.

Chins can live alone with proper care and provided that their social interaction requirements are fulfilled. They love staying in groups and are happier in the presence of their own kind.

Degus are easy to care for. They require hay and grass, like chinchillas, and are fed fresh vegetables occasionally. You can also use vegetables as treats for degus.

Use a specialized shampoo made specifically for rodents as general shampoos are harmful.

Chinchillas generally do not require much grooming and are healthy rodents. They should not be given water baths as it can be dangerous for them. Chinchillas require dust baths to stay clean.

Give your chinchilla a dust bath a few times every week to keep it healthy and clean.

Chinchillas also do not require brushing as they brush their fur themselves. They require hay as their primary food source. Chinchillas also eat grass, dried fruits, and root vegetables. These foods can be given to chinchillas occasionally and as treats while training.

Degus are highly intelligent and easy to train. The most difficult step is to earn a degu’s trust. This process requires considerable time. Patience is key when bonding with these rodents. Positive reinforcements in the form of treats are effective when training a degu.

Degus require daily exercise to remain healthy. Keeping your degus out from the cage for at least an hour can help it get fit and happy.

Training a chinchilla requires a considerable amount of effort and dedication. With persistent training, they can be trained to respond to their names and use the litterbox. Treats are vital when training your chinchilla to motivate them and make training more effective.

Chinchillas also require almost two hours of exercise every day. They are active during the evening, which is the perfect time to let them exercise. Take your chinchillas out of the cage and let them roam freely in a secure room.

You can also use an exercise wheel to make your chinchilla exercise. Without proper workouts, chinchillas become obese and can develop several life-threatening diseases.

Degu vs Chinchilla: Which Is Better for You?

Choosing between a chinchilla and a degu can be challenging. Both rodents make great pets. Chinchillas live twice as long as degus and are bigger than them, making for better long-term companions. Degus are more loving and enjoy the company of their owners, making for better interactive pets.

If you want a pet that is active during the night and has a soft, smooth touch, a chinchilla is a great choice. If you prefer having a pet that is suited for small children, a degu is better suited.

Learn about the different requirements and efforts required to care for chinchillas and degus before coming to a decision.

Are Degus Better Than Chinchillas?

Degus are better than chinchillas for some people. Chinchillas are more independent and are not keen to be touched. If you prefer holding and touching your pet, getting a degu is better. Degus also get along well with children if trained properly. They are easily trainable and can be trained to be calm around children. If you want to interact with pets during the night, chinchillas are the better option.

Can Degus and Chinchillas Live Together?

No, degus and chinchillas cannot live together in the same cage. Both rodents are similar to each other but have different needs. Chinchillas are active during the night while degus enjoy activity during the day. Chinchillas are also more aggressive than degus and can harm your pet degu if they feel threatened. The two animals should be kept in separate cages.

Are Degus Related to Chinchillas?

Yes, degus are related to chinchillas and are part of the rodent family. Both rodents look-alike with few physical differences. Chinchillas have long fluffy tails while degus have long slim tails. Chins and degus are both covered with fur and are affectionate by nature.