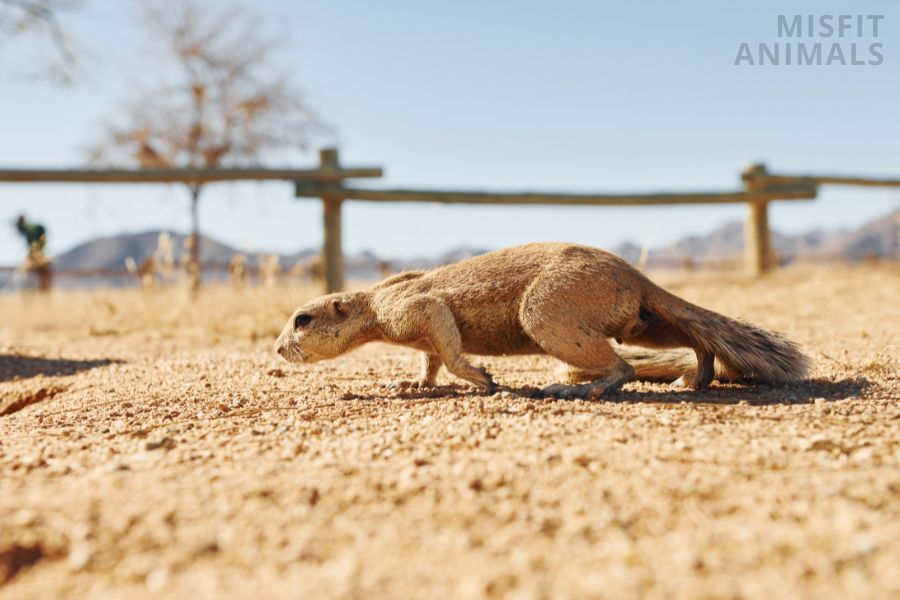 The main difference between gophers and beavers is their size. Gophers weigh about one to two pounds, while beavers can reach up to 60 pounds. They also live in different ways, as beavers are semi-aquatic and gophers live on land.

Gophers and beavers are both common throughout North America and are well-known for their lifestyle habits and appearance.

The two rodents also look similar, which is why they’re often confused.

But, they also both have some features that set them apart from other rodents.

In this blog post, we will compare and contrast these two rodent species to help you tell them apart. By the end of this post, you’ll know everything you need to know about gophers vs beavers!

Gopher vs Beaver: An Overview

Gophers and beavers are different, yet similar animals. They both eat plants, but they live in different places. They are both rodents, but the beaver is large, while the gopher is small.

They live in burrows underground and are known for their love of tunneling. Gophers can tunnel up to 15 feet per hour. They are also proficient swimmers and have been known to build dams in order to create their own ponds.

Gophers are herbivores, and their diet consists mainly of plants and roots[2]. They carefully select the best plants to eat and will store excess food in their cheek pouches to take back to their burrows.

Gophers are also known for their destructive habits, as they are known to eat crops and damage gardens.

Beavers are another type of rodent that is found in North America. Beavers are larger than gophers and have brown fur that helps to insulate them from the cold water.

Beavers live in lodges near ponds or rivers, and build dams to create their own swimming areas. They are excellent swimmers and use their tails as a rudder when they swim.

Beavers are also herbivores, and their diet consists of twigs, leaves, and bark. They fell trees in order to get to the best parts of the tree and use the tree branches to build their dams. Known for their cooperative behavior, they work together to build their lodges and dams.

Now that you know a little bit about gophers and beavers, let’s compare and contrast these two rodent species.

Differences Between a Gopher and a Beaver

The main differences between gophers and beavers is their living habitats, size, lifespan, and tails. Beavers are larger, semi-aquatic rodents with longer lifespans. Gophers are smaller, terrestrial, with thinner tails.

Beavers and gophers are both rodents that live in North America. They are similar in many ways, but there are also some key differences between these two animals.

For one thing, beavers are much larger than gophers. Adult beavers can weigh up to 60 pounds, while gophers only weigh around 2 pounds.

Beavers also have much thicker fur than gophers, which helps to keep them warm in the cold winters.

Here are 1-on-1 comparisons of the following traits of beavers and gophers:

Lastly, beavers build dams and lodges out of sticks and mud, while gophers simply dig burrows in the ground[3]. Beavers use their dams to create ponds where they can live and raise their young. These ponds also provide a place for other animals to drink and cool off in the summer.

Beavers are large rodents, while gophers are small to medium-sized. Beavers are significantly larger than gophers, and you won’t be in doubt if you’re comparing an adult beaver to an adult gopher.

If you happen to pass by a young beaver, then it is possible to think that it’s a massive gopher.

Gophers has a shorter life expectancy than beavers. They typically live for two to three years, while beavers can live for 15-20 years.

The young of both species are weaned at around five weeks old, but beavers take longer to mature. Beavers reach adulthood after two to three years, while gophers are matured after one year.

One of the main reasons for the difference in lifespan is that beavers have fewer predators. Their thick fur, larger size, and aquatic lifestyle make them difficult for predators to catch.

Gophers, on the other hand, are preyed upon by a variety of animals, including weasels, snakes, and birds of prey. They are also smaller, and smaller animals tend to live shorter lives.

When it comes to tails, beavers and gophers have some notable differences. Beavers have flattened, wide tails that help them swim well and act as a rudder when they’re moving through the water. Gophers, on the other hand, have hairless tails that are typically dark with a white tip.

Beavers also use their tail as storage containers for fat reserves. They tap into this fat reserve during the winter when there’s a lack of food. Gophers keep their winter supplies in the ground.

Similarities Between a Gopher and a Beaver

The main similarities between beavers and gophers are that they are both rodents, they have a similar appearance, they both have fur, and they share some behavioral traits.

Beavers and gophers have many differences, but they also have a lot of similarities.

While beavers are larger than gophers, both animals have stout bodies and short necks. They both have long tails that they use for balance when they’re swimming. And both beavers and gophers have large, sharp incisors that they use for gnawing on wood.

Beavers and gophers are both herbivores, meaning that they eat plants. More specifically, beavers eat the bark of trees and shrubs, while gophers eat roots and underground stems.

While beavers and gophers share a similar diet, they have different methods of obtaining food. Beavers use their sharp teeth to strip the bark off of trees, while gophers use their front incisors to dig for roots and underground stems.

Both animals also have an internal storage system for their food, called a cheek pouch, which allows them to cache food for later consumption.

Gopher vs. Beaver: Who Would Win a Fight?

A beaver would win in a fight with a gopher simply because of the size difference. Beavers can weigh up to 60 pounds, compared to gophers that weigh 1-2 pounds maximum.

In a direct fight in the wild, the beaver will win. It’s stronger, bigger, and can produce a more powerful bite.

The gopher is a burrowing animal, and its strong front claws are perfectly adapted for digging. This gives the gopher an advantage when it comes to terrain, as it can quickly escape underground if necessary.

The beaver, on the other hand, is a powerful swimmer. Its large tail provides excellent propulsion through water, and its webbed feet help it to move quickly through the water.

Gophers and beavers may look similar, but they are very different. Beavers are larger and semi-aquatic, building dams and lodges where they live. Gophers are small and live on the ground where they dig burrows.

They do also have some similarities, such as their general appearance and diet.