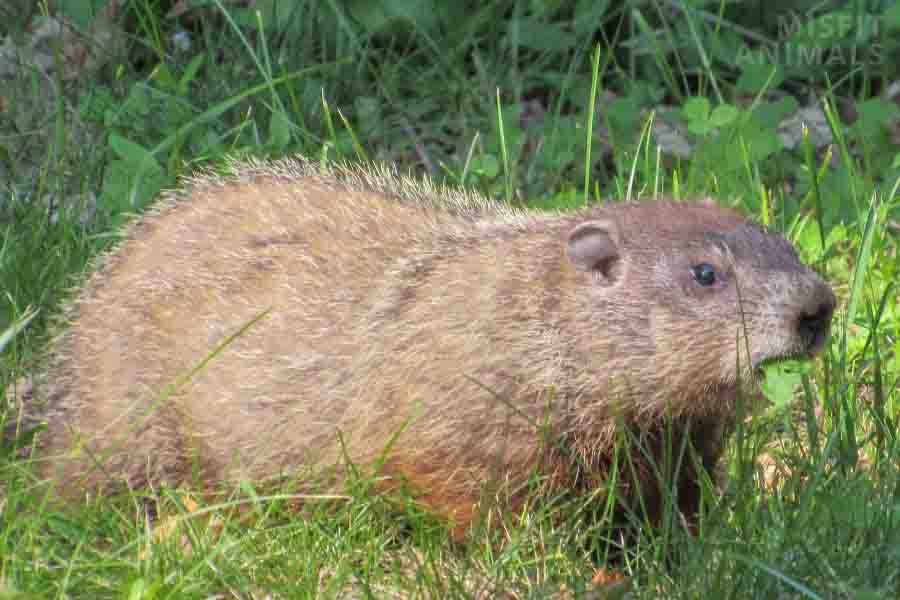 The main difference between woodchucks and beavers is where they live. Beavers are semi-aquatic, while woodchucks live on land. There are also many physical differences, mainly their tails, feet, and size.

Woodchucks and beavers are both common rodents in North America. Due to their striking resemblance, it can be difficult to tell them apart.

Woodchucks are also known as groundhogs.

Though they share some similarities, there are also key differences between these two furry creatures.

In this article, we’ll cover the main physical and behavioral differences between woodchucks and beavers to help you tell the differences.

The main physical difference between woodchucks and beavers is their tails. Beavers have flat and rubbery tails, while woodchucks have soft and fluffy tails. Beavers are also bigger, weighing up to 60 pounds compared to the woodchuck’s 10 to 15 pounds.

Woodchucks and beavers are alike in many ways. Both animals are common in North America, and both have a reputation for being pests.

But, there are some key differences to tell them apart:

The main physical differences between woodchucks and beavers are the tails, feet, and size. Beavers are built for swimming, while woodchucks do better on land.

Beavers have a characteristic tail, which is flat and rubbery. They use this tail to swim and steer in the water. On the other hand, woodchucks have a classic soft and fluffy tail.

One of the most noticeable woodchuck vs. beaver differences is their size.

Woodchucks, also known as groundhogs, are much smaller than beavers. An adult woodchuck typically weighs between 5 and 10 pounds, but they can grow up to 15 pounds.

Beavers grow bigger, as they reach upwards of 60 pounds in weight.

Another key difference between woodchucks and beavers is their habitat.

Woodchucks are found in a variety of habitats, including woods, fields, and even suburban areas. They are terrestrial animals, as they live solely on solid gorund[1].

Beavers, however, are almost exclusively found near water sources like ponds, lakes, and rivers. They are semi-aquatic, which is why they have many adaptations related to improved swimming abilities.

Though both woodchucks and beavers are herbivores, their diets differ somewhat. Woodchucks mostly eat grasses and other plants that grow close to the ground.

Beavers are hardier creatures than woodchucks.

Woodchucks typically live for around 3-5 years in the wild, while beavers live for 10-12 years on average. Beavers can reach 20 years in extraordinary cases.

Finally, woodchucks and beavers also differ in their social behavior.

Woodchucks are generally solitary creatures that only come together to mate. Beavers, on the other hand, live in family groups and are very social creatures.

The main similarity between beavers and woodchucks is their physical build. They have the same physical structure, with large teeth and round body shapes.

Even though woodchucks and beavers have many differences, there are also a few key similarities between these two creatures.

Here are the most notable woodchuck vs beaver similarities:

One of the most striking woodchuck vs. beaver similarities is their appearance. Woodchucks look like beavers. Both of them have furry coats that help keep them warm in cooler weather. They are also of a similar color.

They also both have four legs and a tail, though their tails are different in appearance.

Woodchucks and beavers also share a similar build. Both animals have compact bodies with short legs.

This design helps them move easily through their respective habitats.

Woodchucks and beavers are both herbivores. This means that their diet consists primarily of plants.

Both animals have evolved this way because plants were the most available food around. They developed teeth for chewing plants and an effective digestive system to process the fiber.

Are Woodchucks and Beavers Related?

Yes, woodchucks and beavers are related, but not closely related. Both of these animals belong to the rodent family, which includes creatures like mice, rats, and squirrels.[2]

Within the rodent family, woodchucks and beavers belong to two different families. For a long time, beavers were believed to be closely related to squirrels, categorized in the subfamily called “Sciuridae”.

This subfamily includes all of the animals that are commonly referred to as “squirrels”.

This was changed, as they are now members of the “Castoridae” family. Beavers and woodchucks are still related through the rodent order.

Do Woodchucks and Beavers Ever Meet?

However, it’s important to remember that these two animals have very different habitat preferences. Woodchucks typically live in woods, fields, and other land areas away from water [3]. Beavers, on the other hand, almost exclusively live near water sources like ponds, lakes, and rivers.

This difference in habitat preference means that woodchucks and beavers don’t usually come into contact with each other in the wild. If they do happen to meet, it’s usually by accident and not by design.

Of course, there are always exceptions to this rule. In some cases, woodchucks and beavers may come into contact with each other if habitats overlap. This can happen if a woodchuck wanders into a beaver’s territory in search of food or if a beaver ventures out of its usual habitat in search of new material for its dam.

Woodchuck vs. Beaver: Who Would Win in a Fight?

When it comes to a fight between a woodchuck and a beaver, the beaver would win. Beavers are bigger, stronger, and have a stronger bite.

The beaver would win in a fight against a woodchuck. This comes down to a few reasons.

For one, the woodchuck is much smaller than the beaver. The average woodchuck weighs in at around 4-5 pounds, while the average beaver can weigh up to 60 pounds.

The beaver also has a much more powerful bite. The woodchuck’s teeth are designed for grinding down plants, while the beaver’s teeth are sharp and meant for cutting through wood.

If it came down to a fight between these two animals, the beaver is definitely the stronger opponent. However, the woodchuck is known for being a feisty little creature, so it could put up a good fight.

So, while woodchucks and beavers share some similarities, they also have distinct differences. Their differences mainly come down to the fact that beavers live in water, and groundhogs (woodchucks) live on land.

Over time, beavers have evolved and adapted to the water with improved swimming abilities, while groundhogs have developed better burrowing abilities.

Are Groundhogs Related to Beavers?

Yes, groundhogs and beavers are related, but they are not closely related. Beavers are large rodents that belong to the family Castoridae, which includes six species of beaver. Groundhogs, on the other hand, are members of the family Sciuridae, which contains more than 300 species of squirrels, including chipmunks, flying squirrels, and prairie dogs.