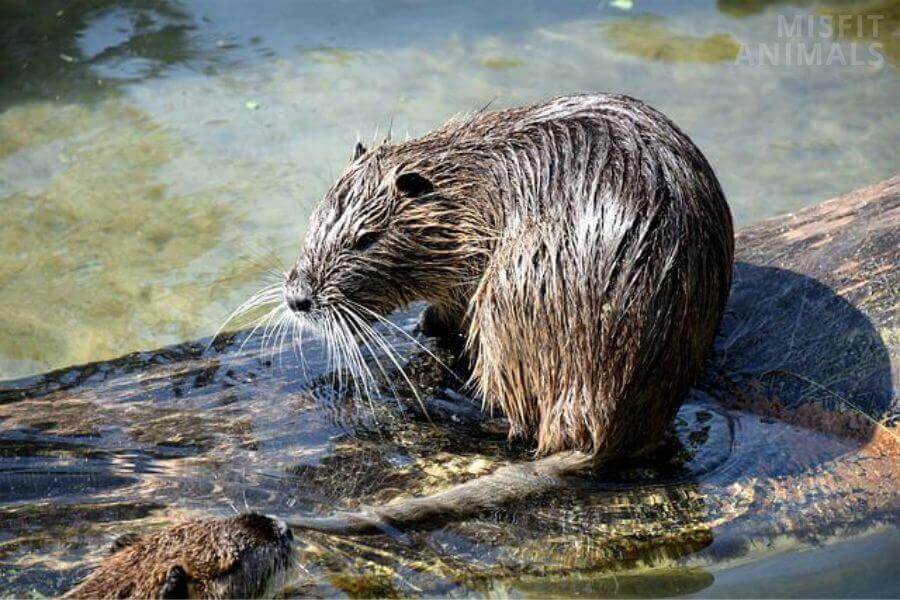 The main difference between beavers and muskrats is their size: beavers are larger and heavier, measuring four times as long and weighing up to ten times as much. Beavers’ tails are also large and flat, while muskrats have thin and long tails.

If you’re an animal lover, you know probably seen both beavers and muskrats around.

But do you know the difference between the two animals?

Muskrats are commonly mistaken for beavers, but there are a few key differences between these two rodent species.

In this blog post, we’ll break down the differences between beavers and muskrats, so you can tell them apart.

Beaver vs. Muskrat: An Overview

Beavers are large rodents, known for their dam-building activities. Muskrats are smaller, but still the biggest member of their subfamily. They can easily be distinguished by their tails: the muskrat’s tail is long and slender while the beaver’s tail is flat and wide.

When most people think of rodents, they think of small, unassuming creatures that scurry around looking for food. But there are some rodents that are much larger and more imposing, such as beavers and muskrats.

Beavers are larger than muskrats. An adult beaver can weigh between 24 to 66 pounds, while an adult muskrat only weighs about 4 pounds.

Beavers also have much thicker fur than muskrats, which helps to keep them warm in the cold water.

One of the most distinctive features of beavers is their large, flat tails. They use their tails for steering when swimming, and for storing fat. Muskrats also have tails, but theirs are much smaller and more pointed.

Now that you know a little bit more about beavers and muskrats, you can see that these two animals have both similarities and differences.

Difference Between Muskrats and Beavers

The main differences between muskrats and beavers include size, lifespan, appearance, behavior, and diet. Muskrats are smaller and live shorter lives than beavers.

When it comes to the difference between muskrats and beavers, there are plenty.

Muskrats are also known to build lodges out of vegetation, while beavers build dams out of logs and sticks[2].

Muskrats are also considered to be pests by many people, as they often damage property by burrowing through levees and dikes. Beavers, on the other hand, are considered to be beneficial animals, as their dams help to control flooding and create habitat for other wildlife.

Here are comparisons of the following traits of beavers and muskrats:

Muskrats and beavers both belong to the family of animals known as rodents. Rodents are characterized by their long tails, sharp incisors, and generally small size. Muskrats are classified as Ondatra zibethicus, while beavers are classified as Castor canadensis.

One of the main differences between muskrats and beavers is their size. Muskrats weigh between 2–4 pounds, while beavers can between 24–60 pounds. Muskrats also have shorter tails and legs than beavers.

Another difference in appearance is that muskrats have brown fur, while beavers have dark brown or black fur.

Their tail is also a significant physical difference. Beavers are known for their wide, flat, and large tails. They use these to store fat and steer when they’re swimming. Muskrats have completely different tails, as these are long, slender, and not used for anything other than balance and temperature control.

Beavers have longer lives than muskrats. Beavers live up to 20 years in the wild, while muskrats live 4-5 years. But, it’s not uncommon for captive beavers to live up to 30 years old. Captive muskrats have been known to live up to 7 years.

There are a few potential reasons for the discrepancy in lifespan between these two animals.

One is that beavers are larger, meaning they have fewer predators. Muskrats are hunted by all predators, while beavers are only threatened by large animals.

Muskrats are very social and primarily live in vast and territorial groups.

Beavers are also social, but they live in small family groups. They only mate with one partner throughout their lifetime, making them monogamous, and live with their offspring until they are two to three years old.

As for living conditions, both muskrats and beavers build dams. But they are vastly different. Beavers build large dams, which are structures that help to control the flow of water. Muskrats’ dams are not as large or as sturdy as those built by beavers.

They also live in different areas. Beavers prefer running water, such as lakes, streams, and rivers, while muskrats live in swamps, marshes, and wetlands.

Muskrats are omnivores while beavers are herbivores. Muskrats eat plants, small fish, frogs, and even crayfish. Beavers only consume woody vegetation such as tree bark and leaves.

Similarities Between Muskrats and Beavers

Differences aside, muskrats and beavers are similar in many ways.

They both build their homes out of sticks and logs. Muskrat lodges are typically smaller than beaver dams, but the principle is the same[3]. Both animals use these structures to protect themselves from predators and the elements.

Beavers and muskrats are both semi-aquatic animals[1].

Beavers and muskrats share similarities, but also have many differences. Both are rodents that live in the water, and both have strong tails that help them swim and build dams. Beavers are larger than muskrats, and they also have orange teeth that help them chew through wood.

Muskrats, on the other hand, have smaller tails and black fur. They are also known for their ability to dive underwater to catch food.

Do All Beavers Have Flat Tails?

Yes, all beavers do have flat tails. This is one of their main characteristics used to differentiate them from other similar animals. Many other rodents have either long, slim, hairless tails or big, bushy tails.

Why Do Beavers Have Flat Tails?

Beavers have flat tails, contrary to many rodents because it helps them to swim. Beavers are excellent swimmers, and their tails act as a rudder, helping them to steer through the water. Additionally, a flat tail provides more surface area for the beaver to store fat. This is important because fat is an excellent source of energy for beavers, and they need to have a lot of it in order to survive the winter months.

What Is the Difference Between Nutrias and Muskrats?

The two animals are often confused with each other, but there are some key differences between nutria and muskrat. Nutrias are larger, with adults weighing in at up to 20 pounds. They also have webbed hind feet, while muskrats do not. Muskrats, on the other hand, are better swimmers and can stay underwater for longer periods of time.