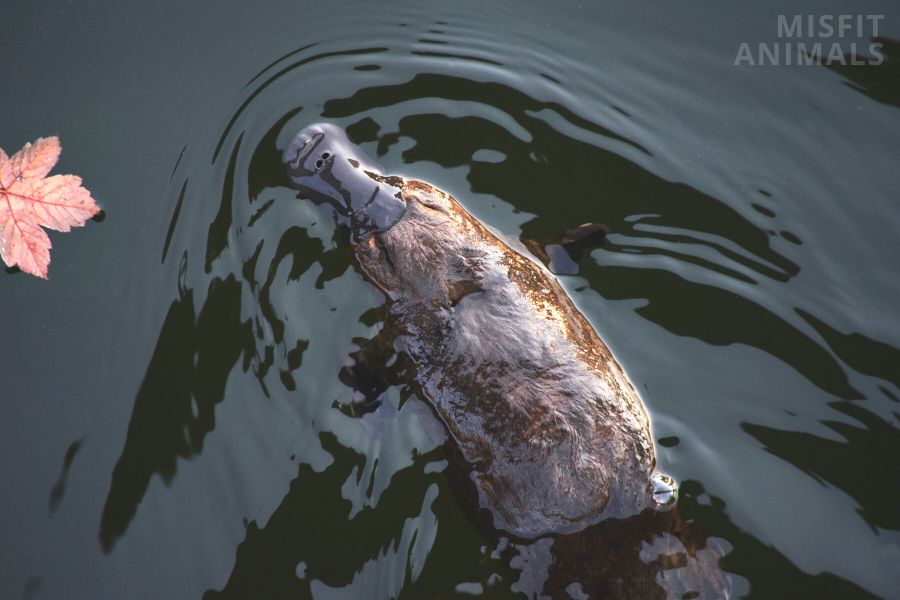 Do you know the difference between a beaver and a platypus?

While they share some characteristics, such as their tail appearance, they are vastly different animals.

This article will give you a glimpse at these two creatures and discuss what makes them unique. We will also explore their habitats and how they interact with their environment.

Platypus vs. Beaver: An Overview

Platypuses and beavers are confused because of their tail, color, fur, and semi-aquatic nature. But, platypuses are smaller than beavers, and also have distinct characteristics, such as their bill.

The platypus is a mammal found in Australia and Tasmania[1]. It is one of the few mammals that lay eggs instead of giving birth to live young.

The strange mammal is also notable for its duck-like bill and webbed feet, which help it to swim and forage for food in the water.

The beaver is a mammal found in North America and Europe. It is known for its large, flat tail, which it uses to help it swim and build dams.

Beavers are also good at using their teeth to gnaw on wood, which helps them to build their lodges and dams.

Differences Between Beaver and Platypus

The main differences between beavers and platypuses are their appearance, scientific classification, diet, and social behavior. You can tell a platypus from a beaver by its bill.

Read about the seven main differences between these animals:

Beavers are classified as rodents, while platypuses are monotremes[2]. This means that beavers are more closely related to other rodents, such as mice and rats, than they are to platypuses.

The major difference between these two groups is that rodents have incisor teeth that grow continuously throughout their lives, while monotremes do not.

There are several behavioral differences between platypuses and beavers:

Beavers are social animals that live in family groups consisting of three to eight members. Platypuses are mostly solitary, staying away from other animals.

As for their tail, beavers use them to swim and build dams, while platypuses use their tails for balance and swimming.

One of the major behavioral differences comes to light when they forage for food.

Platypuses are one of the only mammals to produce venom. They use this venom to defend themselves and hunt. The venom of a platypus is not strong enough to kill a human, but it does cause swelling and pain.

These characteristics have led some scientists to believe that the duck-billed platypus is more closely related to reptiles than mammals.

Beavers are not venomous. As they eat plants, they search for it in water, eat the twigs and bark off of trees they have cut down, or eat off of the ground.

This difference is due to a number of factors, including diet and habitat. It also comes down to their evolution and basic ecology.

Beavers and platypuses differ in appearance. Beavers are larger than platypuses, with adult males weighing up to 72 pounds (32 kg). They have dark brown fur, large front teeth, and a flat tail that they use for swimming.

Platypuses are much smaller than beavers. Adults reach only about 1.3 to 1.6 feet in length. They have brown fur, a duck-like bill, and webbed feet.

One of the most unique features of the platypus is its ability to secrete venom from its hind legs.

Beavers are herbivores. Their diet consists mostly of bark, twigs, and leaves. Platypuses are carnivores, not feeding on plants but on other animals. They mainly eat small invertebrates, such as insects and shrimp.

One of the most obvious physical differences between beavers and platypuses is their tails. Beaver tails are flat and scaly, while platypus tails are furry and tapered.

The function of these tails also differs between the two species.

Beaver tails are used for balance and propulsion when swimming, as well as fat storage. Platypuses also use their tails for swimming, but the tail is also used for burrowing.

Beavers and platypuses differ in their reproductive strategies and birth-giving. Beavers give birth to live young, while the platypus is one of the rare egg-laying mammals.

Males of both species produce sperm, but only female platypuses lay eggs.

While it’s unknown exactly why platypuses developed this way, the cause of their egg-laying behavior is most likely due to the presence of vitellogenin. This is a protein found in reptiles that is essential to lay eggs.

Similarities Between the Beaver and Platypus

Beavers and platypuses are both semi-aquatic animals that live in freshwater environments. Both species build dams and lodges and use their tails for swimming.

Both species are semi-aquatic, meaning that they live in freshwater environments and spend part of their time on land.

They are both good swimmers, using their tails to help them move through the water.

Beavers and platypuses are proficient builders. They use their powerful front limbs to construct dams and open nests out of sticks, stones, and mud.[3]

Finally, both beavers and platypuses are considered to be keystone species in their respective ecosystems.

This means they play an important role in their ecosystems:

Is a Platypus Part Duck and Part Beaver?

No, platypuses are not part duck and part beaver. They are completely different than both of them. But, they do share similarities with both, such as the beaver-like tail and duck-like bill.

The platypus is a unique creature found in Australia and Tasmania. To the untrained eye, it looks like a bizarre combination of different animals, usually described as a duck-beaver hybrid.

After all, it does have the bill of a duck, the fur of an otter, the tail of a beaver, and the webbed feet of an amphibian.

But, the platypus is not any of these.

Platypuses are part of the genus of Monotremes, known to lay eggs and nurse their younglings with milk.

There are two families of Monotremes:

What Is the Relationship Between Duck-Billed Platypus and Beaver Evolution?

Phylogeny is the study of the evolutionary history of a group of organisms. Scientists use phylogeny to determine the relationships between different species.

This is primarily done with two techniques:

One way to determine phylogeny is by looking at similarities and differences in DNA.

Another way to determine phylogeny is by looking at similarities and differences in anatomy.

Beavers and platypus are very different. One is a rodent, while the other is a monotreme. Beavers are industrious builders who dam up rivers to create their homes, while platypuses are shy aquatic animals that lay eggs.