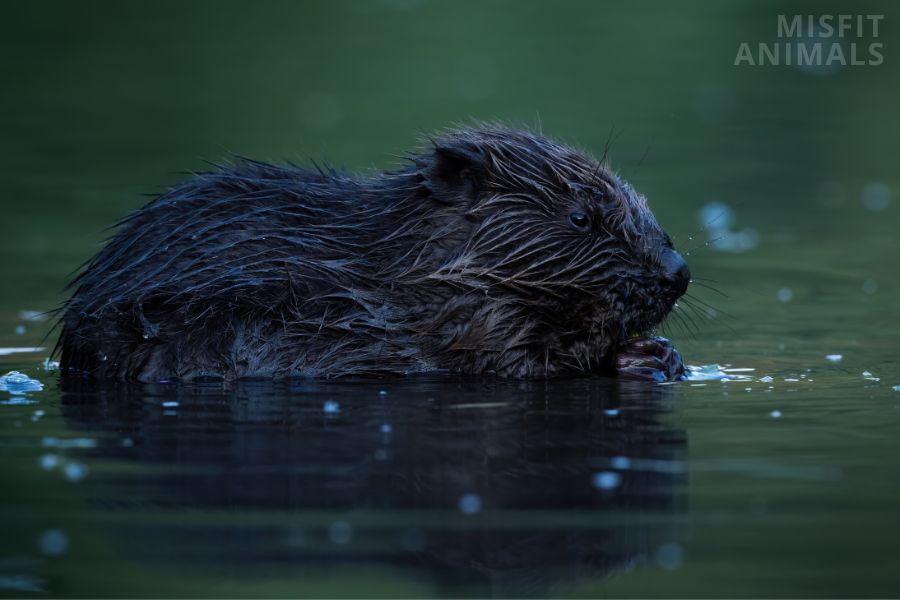 Yes, beavers are generally nocturnal, sleeping through the day and working at night. While this is true in most cases, they are sometimes seen during the day.

Do you ever wonder if beavers are nocturnal? Do they sleep during the day and stay active at night? Or do they have more of a balanced sleep schedule?

In this blog post, we’ll take a closer look at beavers’ sleeping habits and find out what the science has to say about it.

Most nocturnal animals have adapted this activity pattern because of external factors, such as a lower chance of predators or easier access to food.

While beavers technically fit into the nocturnal, they are also categorized as crepuscular. That is, they are most active during the twilight hours (dusk and dawn).[1]

So while beavers do sleep during the day, they are not true “night owls” and will still be active during certain times of the day.

There are a few different factors that can make an animal nocturnal:

The animal’s diet plays a role. Animals that are mostly carnivores or insectivores often hunt at night because that’s when their prey is most active.

Another factor is the presence of predators. Animals that are easy prey for predators, such as rabbits and deer, are often nocturnal so they can hide in the dark.

The animal’s habitat can also play a role in its sleep schedule. Animals that live in areas with little human activity are active at night to avoid humans.

Do Beavers Have Good Eyesight?

Beavers have a strong sense of smell, hearing, and touch, but they have bad eyesight. They rely on their keen sense of hearing, smell, and touch to find food and wood, and avoid predators.

Because they have bad eyesight, they move slowly on land, rarely venturing more than twenty meters from the water.

Despite their poor eyesight, beavers are excellent swimmers and can stay underwater for up to fifteen minutes at a time. Their webbed feet and tails help them navigate through the water with ease.

When Do Beavers Come Out?

Beavers are nocturnal, meaning they come out to forage, find wood, and build dams, when the sun is setting.

The daily routine of beavers looks something like this:

Beavers are rodents that live in freshwater environments and build dams to create their homes, which are called lodges[2]. They use these lodges for sleep during the day, and for mating and nurturing during the night.

Since beavers are nocturnal creatures, they are usually only out during the night.

What Time of year Do Beavers Come Out?

Beavers are active throughout the entire year. They do not hibernate, but they do slow their activity levels down. They start becoming active again at the beginning of spring.

What Time of the Day Are Beavers Most Active?

Beavers are mostly active once the sun goes down (at dusk). Beavers are less active during the winter months and will spend more time in their dens.

As beavers are crepuscular, their main activities take place around sunset and sunup.

If you’re hoping to spot a beaver, your best bet is to look for them at night or during the early morning or late afternoon.

Keep in mind that beavers are less active during the winter when they spend more time in their lodge.

What Time of the Days Are Beavers Least Active?

Beavers are least active during the day when they sleep and rest.

Beavers are busiest during the twilight hours of dawn and dusk. This is when they leave their lodges to forage for food. They also spend a lot of time swimming and playing in the water during these hours.

This also means that they don’t have much energy during the day. They are up all night and spend their days resting.

What Do Beavers Do During the Night?

There are a few reasons why beavers tend to be more active at night:

Beavers are mostly herbivores, and their diet consists of tree bark, leaves, and other vegetation. At night, there are fewer people and animals around, so beavers can forage for food without being disturbed or hunted.

Another reason why beavers are nocturnal is because they are less likely to be attacked by predators at night.

Most of the animals that prey on beavers, such as coyotes, foxes, and bears, are diurnal animals that are active during the day. By being active at night, beavers decrease their chances of being attacked and killed.

The final reason why beavers are nocturnal is because it’s easier for them to build their dams and lodges at night.

Beavers are known for their impressive dam-building abilities, and they often build their dams in areas where there is little human activity. By building their dams at night, beavers can avoid being disturbed or interrupted.

When Do Beavers Build Dams?

Beavers mainly build their damns and lodges at night. They will look for a good place to settle down, factoring in wood and water supply, as well as elevation and slope grade.

In terms of food, beavers primarily eat the bark of trees.

When Do Beavers Sleep?

Beavers sleep during the day because they are nocturnal animals. They stay in their ledges with their family group, consisting of three to eight, cuddling for warmth.

Beavers usually sleep in their lodges during the day. These are structures built out of sticks and mud that they live in. The lodges provide them with warmth and protection from predators.

When it is cold outside, beavers often huddle together in their lodges to stay warm.

Beavers typically sleep for about eight hours each day. They can go into periods of deep sleep called torpor when the weather is cold or food is scarce.

During torpor, beavers lower their body temperature and heart rate to conserve energy. They can remain in this state for several days at a time.

Do Beavers Hibernate During the Winter?

No, beavers do not hibernate. They stay active throughout the year, as they have large fur coats that protect them from the coat. They also stock up on food during the fall, which they then eat in the colder months.

Beaver behavior is perhaps one of the best examples of crepuscular activity in the animal kingdom.

Beavers are considered to be nocturnal but they will often venture out during daylight hours if there’s something important to do. This duality in their behavior has led some people to consider them crepuscular creatures.

Where Do Beavers Sleep?

Beavers sleep in their lodges. When building their lodges, they excavate a chamber for sleeping. When the temperatures drop, they sleep together in a small huddle to better stay warm.