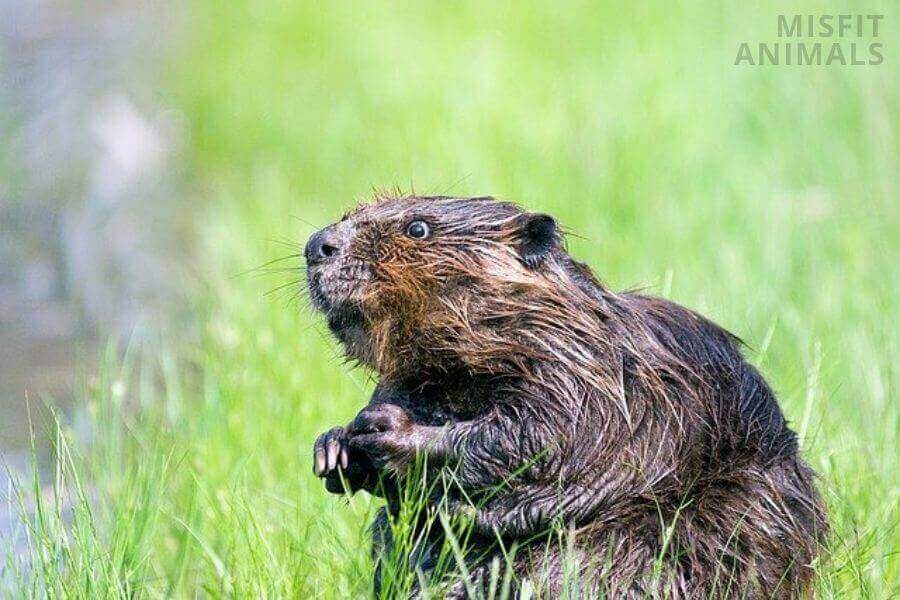 No, beavers do not hibernate, as they have no need to do so. They also don’t migrate but live in their lodge. Their warm and waterproof fur coat keeps their body temperature high, even in freezing waters.

Most rodents hibernate or enter a state of torpor, when the temperatures drop during the winter. So what about beavers?

These wood-chewing rodents have their own survival mechanism during the winter, as they stick out from the pack of rodents.

In this blog post, we’ll explore beaver behavior in the winter. We’ll also take a look at some of the ways beavers adapt to the cold weather.

Beavers do not hibernate in the winter, but their activity does slow down. They live in their lodge, where they spend most of their time resting. They also forage in the winter, chewing on twigs and other available foods.

Contrary to most rodents, beavers don’t hibernate during the winter months. They stay active, though not as active as during the other times of the year.

During the winter, beavers still forage for food, but their diet changes to twigs and buds of their favorite trees, such as birch.[1]

One of the main reasons why beavers don’t hibernate is that they can sustain the cold. Many rodents have to slow their activity down to almost a standstill to preserve energy. Beavers do slow down, but not as much.

What Do Beavers Do in the Winter?

Beavers live in their lodge during the winter, which they access from under the ice. They are well-suited for cold temperatures due to their course, warm coat, and oily substance they secrete than repels water.

Beavers are well-adapted to the cold weather and have a number of strategies for surviving the winter months.

One of the most important things they do is store food in their lodges. Beavers pack their lodges with branches and logs that they’ve cut down, as well as any other food they can find. This gives them a supply of food to last through the winter.

Beavers also insulate their lodges with mud, which helps to keep them warm. When the weather gets really cold, beavers huddle together in their lodges for extra warmth.

In addition to storing food and staying warm, beavers also have several adaptations to swim in freezing water:

No, beavers do not migrate. They are well-adapted to the cold weather and can survive the winter months by storing food and staying warm in their lodges.[2]

Beavers don’t migrate on a seasonal basis. They stay put, living in the lodges that they built in the previous seasons.

If their habitat is destroyed or the food supply dwindles, beavers may move to a new area in search of a better home. While they don’t technically migrate, they are capable of moving to a new location if necessary.

In short, beavers don’t migrate but relocate if necessary.

What Do Beavers Eat in the Winter?

Beavers mostly eat twigs, bark, and buds from their favorite trees during the winter. They also store food in their lodges, which is refrigerated by the cold temperatures.

Beavers are herbivores and rely solely on plant matter for nutrients:

In the winter, they eat whatever is available. They rely mostly on twigs and buds. They swim out of their lodges when they run out of food, swimming through the freezing water.

On top of eating, they also chew on wood during the winter to maintain their teeth. They do so less frequently than in the summer, but they still need to gnaw on wood.

How Do Beavers Get Food in the Winter?

Beavers are rodents that are known for their dam-building behavior[3]. This industrious creature is also an excellent swimmer and an adept climber, and they use these skills to find food.

In the winter, when food is scarce, beavers rely on their stored food supplies. They cache branches and logs in their lodge or under the ice. When the snow melts and water levels rise, beavers will swim to their food caches and eat the submerged vegetation.

Beavers are also known to eat wood shavings, leaves, and bark. When these food sources are not available, beavers will eat their own stored body fat.

This helps the beaver survive during periods of food scarcity.

How Do Beavers Prepare for Winter?

To prepare for winter, beavers store food in their lodges. They also line their lodges with mud to create better insulation. This helps keep them warm during the cold months. They also store fat in their tails.

As the weather starts to cool down and the days get shorter, animals all over the world begin to prepare for winter. Some migrate to warmer climates, while others hunker down and store food. Beavers are one of the latter.

These industrious rodents spend their autumn months preparing their lodges and food stores so they can ride out the cold weather in comfort.

Beavers build their homes, called lodges, out of branches and mud. The lodge has an underwater entrance that the beavers can use to escape from predators or to access their food stores.[4]

Inside, the lodge is dry and warm, thanks to a layer of insulating mud.

To prepare for winter, beavers collect sticks and logs to reinforce their lodges. They also stockpile food, such as tree bark and leaves, to eat during the winter months when they are confined to their lodges.

As winter approaches, beavers’ activity slows down. Their body temperature and metabolism slow down, allowing them to conserve energy. They spend most of their time resting in their lodges, emerging only occasionally to feed.

They also eat more during the fall in order to store fat in their tails. When food runs out, they rely on this fat for energy.

What Time Do Beavers Come Out?

Beavers come out occasionally during the winter, but their activity doesn’t pick up until spring. This is when frequent signs of beavers occur, such as chewed trees.

Beavers are nocturnal, meaning they are most active at night. In the winter, beavers spend more time in their lodges and are less active during the day than normal.

They are most active in the fall, which is when they stock up on supplies for the winter.

Do Beavers Live in Water During the Winter?

Beavers do not live in water, but in lodges that they access through the water.

Beavers build their homes by felling trees and using the branches and logs to construct walls and roofs. They usually create one large chamber that they use for sleeping and storing food.

Some beavers will also build smaller chambers that are used as latrines.

Beavers do not hibernate in the winter. They are active all year round, though their activity slows down during the winter months. They spend most of their time in their lodges, as this is where they have stored up food.

When necessary, they come out to forage or chew on food, as they have to maintain their teeth.

They have several adaptations that make them well-suited for winter activities, such as a warm fur coat and a secretion of oil that makes their coat repel water. They also groom themselves to stay dry to avoid getting too cold during the winter months.