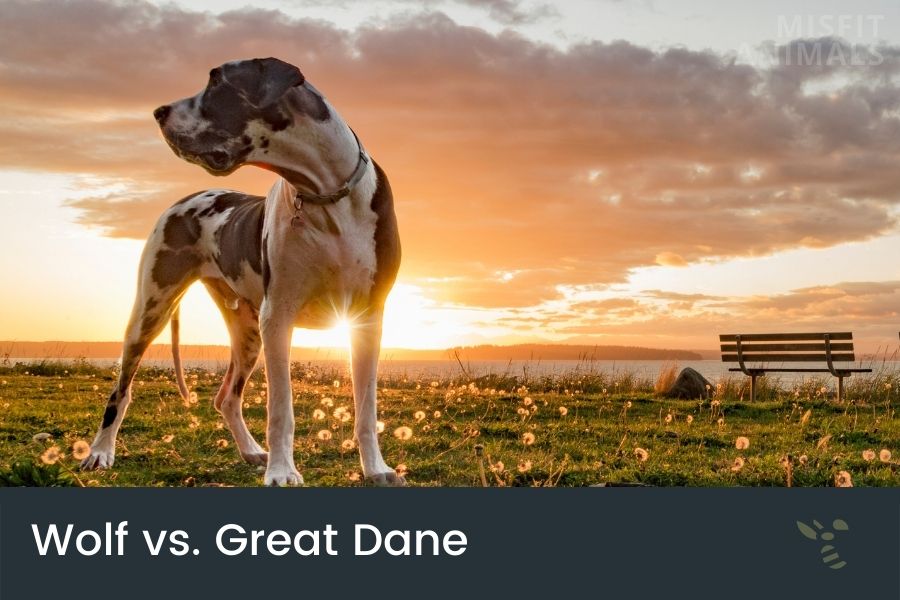 The Great Dane is slightly larger than a wolf, both in terms of height and weight. But they wouldn’t be able to beat a wolf in a fight, as wolves are more aggressive, and better predators.

The Great Dane is one of the few dog breeds that are bigger than a wolf. However, a large wolf could outgrow a Great Dane.

Wolves are predators, while Great Danes are domestic dogs. There are some key differences, but also similarities between the two.

In this article, we’ll explore more about the relationship between wolves and Great Danes, as well as their differences and similarities.

The Great Dane is one of the few dog breeds that stands taller than a wolf. They also weigh more.

A wolf is not as big or heavy as a Great Dane, but it is still pretty large.

A wolf can range from 65 to 150 pounds in weight, though the heaviest wolf recorded measured 175 pounds. Males are typically larger than females.

Its length ranges between four to six feet long with an average height of 26 to 33 inches at their shoulders. Their tails usually measure about 11 to 20 inches (29 to 50 cm).

How Tall Is a Wolf Compared to a Great Dane?

A wolf stands about 26 to 33 inches tall at the shoulders. In comparison, the Great Dane is a domesticated breed of dog that typically stands around 28 to 34 inches at the shoulder.[1]

Not only do they have the height advantage, but they can also weigh more, with about a 25 to 40 pounds difference.

The biggest differences between wolves and Great Danes are their physical appearance, bite force, stamina, and aggression.

When it comes to physical appearance, the wolf is definitely more agile and has sharper teeth than the Great Dane. However, the Great Dane is much bigger and heavier than the average wolf.

Although they are both canines, these two breeds have different characteristics that make them suited for different purposes.

For example, the Great Dane was bred as a working dog while wolves are known for being aggressive predators.

Here are some key differences:

The wolf has one of the most powerful bites of any canine. The average bite force is around 405 PSI, but they can reach up to 1200 PSI when threatened, which is five times as much as that of a German Shepherd Dog (GSD).

Great Danes, on the other hand, has a bite force of about 238 PSI, which is significantly less than a wolf.

If it came down to a race, a wolf would win – though only over longer distances.

The Great Dane has a higher acceleration, meaning it’s better over short distances. Wolves are built for speed, but more importantly, they’re built for stamina.

A wolf can run between 30 to 40 miles a day, as they use its stamina to its advantage when hunting.

Related: How fast can wolves run?

Wolves are known to be aggressive animals. They aren’t friendly towards other animals, as they hunt and kill for food. While they tend to stay away from humans, they’ll attack almost anything that threatens them.

Lone wolves may not attack, but a wolf pack doesn’t stand down from a fight.

On the other hand, Great Danes aren’t aggressive. They’re great pets, and can easily live in homes with kids.

Some of the most prominent similarities between Great Danes and wolves are, that they eat many of the same things, their social behavior, and the fact that they’re related.

The Canidae Family consists of wolves, domestic dogs, foxes, and coyotes (among others).

Both Great Danes and wolves are part of the Canidae family. They share this family with other members, such as coyotes and foxes.

The wolf, Canis Lupus, and the dog, Canis familiaris, are hence related by family.

Related: Are dogs and wolves the same species?

A healthy diet helps ensure that both wolf and dog breeds behave in accordance with their natural tendencies.

Wolves live with their pack, which consists of parents and children. Wolves’ social structure helps them survive, as it provides them with a clear hierarchy.

They do many of their daily activities together, as they’re more efficient, and more dangerous when they’re together. They hunt, raise pups, and travel together.

Great Danes, similarly, enjoy the company of their family. They don’t enjoy staying home while their owners are away. They’ll get stressed and lonely, which can result in health problems.

Are Wolves and Great Danes Related?

Yes, wolves and Great Danes are related. All dog breeds are somewhat related to wolves, as they’re descendants of wolves.

The grey wolf is the ancestor of all dog breeds, but due to centuries of selective breeding by humans, dogs have diverged significantly from their wolf ancestors.

Studies show, that wolves and dogs share about 99.9% of their DNA. Because of this, they’re technically the same species. Hence, they can also produce offspring.

Wolf-dog hybrids are called Wolfdogs. As wolves and dogs are interfertile, they can produce viable offspring. In other words, wolfdogs can reproduce as well.

Who Is Stronger a Wolf or a Great Dane?

While Great Danes are larger and heavier than wolves, they don’t have the same killing power. A Great Dane would have a difficult time against a wolf.

Wolves are apex predators. They often prey on animals larger than themselves, such as moose, elk, and bison. However, this is when they’re with their pack.

Alone, wolves are much less threatening. But that doesn’t mean a wolf isn’t dangerous on its own.

As wolves are raised to hunt and kill, they have a natural predatory instinct. On the other hand, Great Danes are friendly, and gentle, creatures, even though they can serve as working and hunting dogs.

Can a Great Dane Take On a Wolf?

When it comes to the question of whether or not a Great Dane can take on a wolf, the answer is no. A wolf would easily be able to take down a Great Dane.

Although a Great Dane is bigger and heavier than the average wolf, wolves are more aggressive and have sharper teeth, which gives them an advantage in a fight.

In addition, wolves are also much more agile than Great Danes, meaning that more easily run around the big dog.

Therefore, it is safe to say that a great Dane would not be able to take down a wolf.

The wolf and the great Dane are two very different animals, even though they do have some things in common. A wolf is much more aggressive than a Great Dane, while a Great Dane is larger.

As wolves are predatory by nature, a single wolf would definitely be able to take down a Great Dane in a fight.