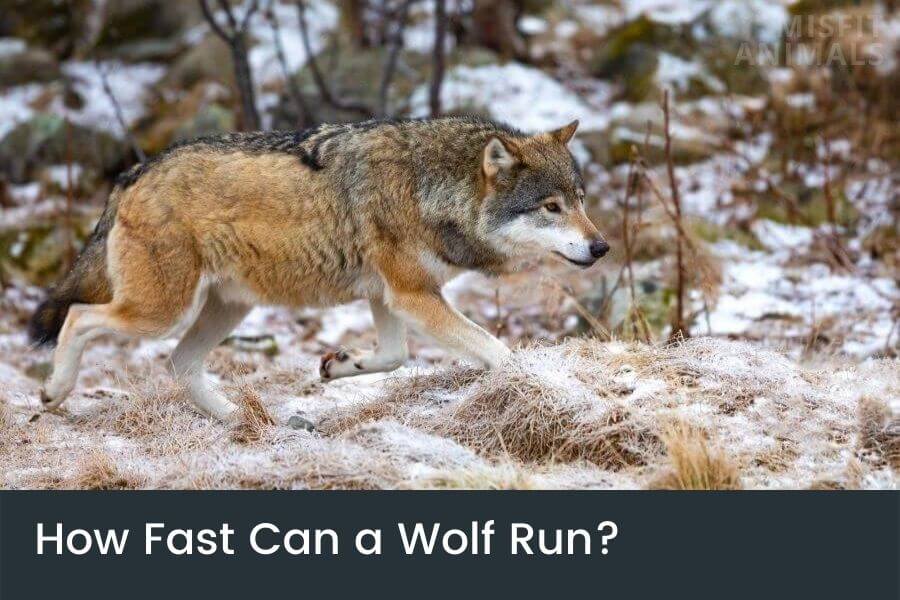 Wolves are incredible hunters, partly due to their speed and agility. They’re able to both run very fast, but also run very far.

While they’re not the fastest animal on the planet, they’re definitely up there – and certainly much faster than humans.

In this article, we’ll take a look at wolves’ stamina and speed.

How Fast Are Wolves?

Most wolves have a top speed of 36-38 mph, but they can run for up to 40 miles when running around just 5 mph.

Different species of wolves can run at different top speeds, with the Arctic wolf believed to be one of the fastest at 46 mph.

Wolves can travel much farther than that though. One study found that wolves in Yellowstone National Park traveled an average of 62 miles per day. [1]

How Fast Are Black Wolves?

The black wolf has an average top speed of about 36-38 mph. These wolves are known for their black fur coat. They’ll travel a lot, either following prey or changing their resting site.

How Fast Are Gray Wolves?

Most gray wolves can sprint at speeds of up to 36-38 miles per hour. However, when running for 40 miles they are only able to run around five mph. When traveling, they run with their pack, always looking out for prey.

How Fast Are Red Wolves?

The red wolf is a relatively small, slim predator that shares some physical characteristics with the coyote. These wolves are one of the faster species, clocking in at a maximum speed of 46 mph.

How Fast Can an Arctic Wolf Run?

These wolves live in the arctic tundras of Greenland, Alaska, and Canada. They use their speed for hunting and will cover a lot of ground every day to find food.

The Maximum Speed of a Wolf

Most wolves have a top speed of 36-38 mph, but a select few have been known to reach speeds upwards of 46 mph.

Wolves that live in colder climates generally have a higher top speed than those living in warmer climates.

While they can run this fast, they rarely do. Wolves are known as long-distance hunters, slowly exhausting their prey by following it for miles upon miles at a time. As wolves have remarkable stamina, their prey will tire out before they do.

What Is the Fastest Wolf?

The Arctic wolf is believed to be the fastest wolf in the world and has been recorded running at 46 mph.

They can only run this fast in short bursts, and will quickly tire out.

Why Are Wolves So Fast?

Wolves use their speed primarily for hunting, they need to be able to run down prey quickly. In addition, fast movement helps them avoid danger and escape from predators themselves.

They can run this fast because of their incredibly muscular legs and generally slim build. They’re built much like the cheetah, which is the fastest ground animal in the world.

When wolves run, they dig into the earth with their claws, which gives them more traction and hence more speed.

How Far Do Wolves Travel?

Wolves can travel anywhere between 30-40 miles a day.

They travel either while hunting or switching between dens. While wolves don’t migrate, they’ll follow wherever their food goes, often tracking down ungulates on the move.

How Fast Do Wolves Run When Traveling?

When wolves travel, they only run about 5 mph. This way, they can keep going for miles at a time without resting.

If they’re traveling with pups, they may be running slower or stopping more frequently, as the young wolves don’t have as good stamina as the adult wolves.

Which Is Faster a Wolf or a Lion?

When it comes to running speed, lions are faster than wolves.

Most wolves have a top speed of 36-38 mph, while they can run for 40 miles when running around at just five mph.

Lions, on the other hand, have a top speed of about 50 mph (80 kph) and can only maintain that speed for around 500 yards before tiring out.

Which Is Faster a Wolf or a Coyote?

When it comes to running speed, coyotes are faster than wolves.

Most coyotes can reach top speeds of about 43 mph (60 kph), whereas most wolves only reach 38 mph (61 kph). Both animals have great stamina as well.

Which Is Faster, a Wolf or a Fox?

Wolves and foxes have very similar top speeds, as both are able to run about 40 mph at top speed. This does depend on the breed of fox though, as some foxes can only reach 30 mph.

Wolves have the ability to travel much further than foxes; they can typically cover 40 miles when running at speeds around five mph. Foxes, on the other hand, typically won’t cover more than 12 miles in a single night.

Which Is Faster, a Wolf or a Dog?

While most dogs can’t outrun a wolf, the greyhound is much faster than wolves. Greyhounds can run up to 45 mph (72 kph), whereas wolves typically only reach 38 mph.

The Greyhound is the fastest dog breed in the world and is used for dog racing.

Which Is Faster, a Wolf or a Cheetah?

Cheetahs are much faster than wolves, reaching upwards of 70 mph. That’s almost twice as fast as most wolves.

Cheetahs are the fastest land animals in the world. They use their speed to catch fast prey, such as antelopes.

Most wolves can run up to 36-38 mph, but some wolves have been recorded running at up to 46 mph. While they can only do so for short bursts, they typically run 5 mph when traveling over long distances.

By keeping their pace down, they can travel between 30 and 40 miles a day, often covering more than 4,000 miles per year.